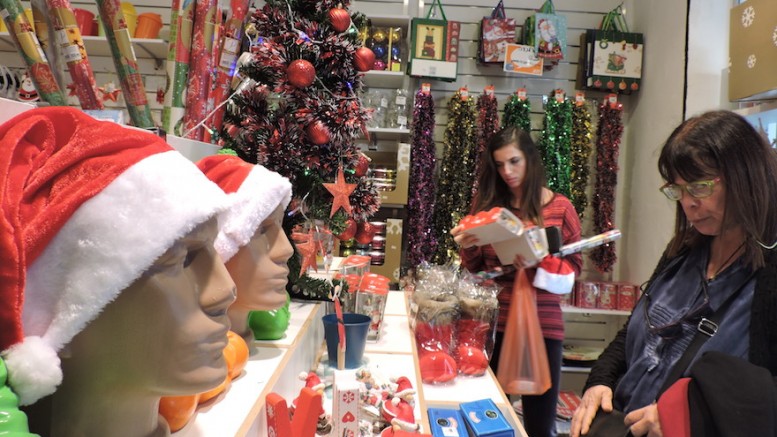 Customers shopping at Joy, a small Tel Aviv store that has been heckled repeatedly for selling Christmas and New Year’s merchandise. (Ben Sales)

TEL AVIV (JTA) — Every December Elana Snitman’s family gathers at her home, where they decorate a fake pine tree with ornaments, placing gifts underneath to exchange. After gathering for a dinner of chicken, eggplant and beet-and-potato salad, they sing a traditional song about the festive tree and the coming of winter.

It’s a sacred tradition for the Snitmans, but it’s not a Christmas tradition. It’s all in the name of “Novy God,” or New Year’s in Russian — a day celebrated beginning Dec. 31 that for many of Israel’s Russian immigrants and their children encompasses Christmas-like rituals and symbols.

Most Israelis celebrate their new year on Rosh Hashanah, and treat both Christmas and New Year’s like any other day — shops stay open, kids go to school and adults work. But many of Israel’s approximately 1.6 million Russian speakers see Novy God as a cultural holiday and time for family gathering. Soldiers from Russian immigrant families can receive a special leave for the holiday.

“From my perspective it feels like something you need to hide because people connect it to Christmas,” said Snitman, 23, who moved to Israel from the republic of Georgia when she was 2. “That’s not how it is with us. We don’t do the Christian holiday. It’s a civil holiday.”

Elaborate celebrations of Novy God are a holdover from Soviet times, when the atheist government prohibited recognizing Christmas and pushed off its traditions by a week. Russian-speaking Israelis brought the custom with them when they moved to Israel en masse in the 1990s. For them, Santa Claus is not a saint but a warm grandfather-like figure who brings presents. Carols revolve around the season or wishes for the coming year, not around Jesus’ birth. Some families buy piles of plastic foam pebbles to simulate snow.

Gil Tairov, 17, works at Novy God market, which injects bright colors and flashy lights into its drab concrete surroundings at Tel Aviv’s Central Bus Station. Tairov estimates that well over 100,000 people visit the market in December to buy all manner of holiday kitsch — from plastic pine trees and ornaments to Santa hats and stockings. A giant inflatable Santa hangs off one of the stands.

The store hasn’t inspired only cheer: In Israel, the war on Christmas — or at least Christmas merchandise — is real. Members of a far-right group protested a tree-decorating event at the Jerusalem YMCA last month. Religious Jews heckled a Christian choir singing carols on Jerusalem’s Ben Yehuda Street last year.

Snitman says Jews have criticized her for celebrating a Christian holiday, and Tairov says hecklers come to his market about once a week.

Yet Russian-Israelis say Novy God is becoming somewhat more popular in Israel, as Russian immigrants establish themselves here and marry native-born Israelis. Tairov estimates that 30 percent of his customers are native Israelis not descended from Soviet immigrants, and he conducts business in Hebrew as well as Russian.

Snitman is inviting two non-Russian friends to celebrate with her family this year.

Some 160,000 Christians live in Israel, most of them Arab, and the president and prime minister send out official greetings for Christmas. On Christmas Eve and Christmas Day, the Tourism Ministry provides a free shuttle between Jerusalem and Bethlehem, where a traditional Mass is conducted. The Jewish National Fund has sold Christmas trees for about two decades.

Despite its spread among Jewish-Israelis, Tairov predicted Novy God would remain a niche holiday in Israel, not the national winter festival it is in Russia.

A Russian bookstore in Jerusalem sells tinsel next to Jewish holy books like the Bible and the Zohar. A hole-in-the-wall souvenir store in Tel Aviv is advertising a Buddha next to a fake Christmas tree.

The Tel Aviv shop is called Joy. But its storefront is bare, co-owner Gil Oren said, because the word “joy” in Hebrew transliteration looks like the word “goy,” a derogatory Yiddish word describing a non-Jewish person. People already heckle Oren for selling Christmas merchandise, and he didn’t want to attract even more negative attention.

“It surprises me that that happens,” he said. “If you don’t think it’s good, just don’t buy it.”

Be the first to comment on "Russian-Israelis embrace tinsel, trees and Santa Claus — but don’t call it Christmas"