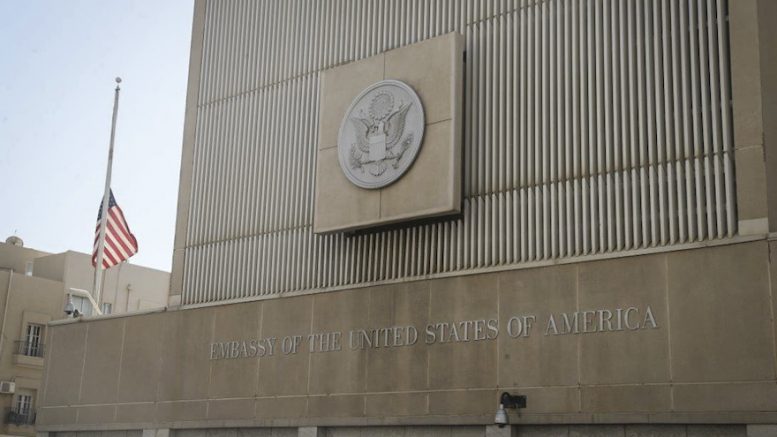 The Embassy of the United States of American in Tel Aviv, Israel. June 14, 2016. Photo by Flash90

JERUSALEM (JTA) — The transition team for President-elect Donald Trump is already checking into possible locations in Jerusalem for the U.S. Embassy, according to an Israeli news channel.

Channel 2 reported on Dec. 12 that officials from Israel’s Foreign Ministry had begun checking into possible sites on behalf of the Trump team. The news came hours after Kellyanne Conway, a top Trump adviser, told conservative talk radio host Hugh Hewitt during his show that moving the embassy was a “big priority” for Trump.

“It is something that our friend in Israel, a great friend in the Middle East, would appreciate and something that a lot of Jewish Americans have expressed their preference for,” Conway said. “It is a great move. It is an easy move to do based on how much he talked about that in the debates and in the sound bites.”

Foreign Ministry officials last week reportedly met with officials from the Immigrant Absorption Ministry to discuss the availability of the Diplomat Hotel in the Talpiot neighborhood, a privately owned building that is home to 500 elderly immigrants from the former Soviet Union, according to Channel 2. The building reportedly will not be available until 2020, however.

Some political and security officials in Israel are expressing concern over Trump’s expected move to transfer the embassy to Jerusalem because of the expected response of the Arab world, Channel 2 reported. The report also said the action is being undertaken without coordination with the current administration of the U.S. State Department, which does not agree with the move.

Maen Rashid Areikat, the chief representative of the Palestine Liberation Organization in the United States, told The Wall Street Journal that the Palestinians hope the incoming Trump administration will keep the embassy in Tel Aviv. He said moving the embassy would make it more difficult to resolve the Israeli-Palestinian conflict.

On Dec. 13 at a news conference in Baku, the capital of Azerbaijan, Prime Minister Benjamin Netanyahu said a Trump decision to move the U.S. Embassy to Jerusalem would be “great.”

Congress passed a law mandating the move in 1995 that included a presidential waiver that lapses every six months. Each president since then has exercised the waiver, with President Barack Obama doing so as recently as last week, less than two months before he leaves office.

The waiver requires that the president assess that moving the embassy would pose a national security risk to the United States. U.S. administrations for decades have said that such a move would precipitate anti-American violence in Muslim lands.

Be the first to comment on "Report: Trump transition team checking possible locations for Jerusalem embassy"