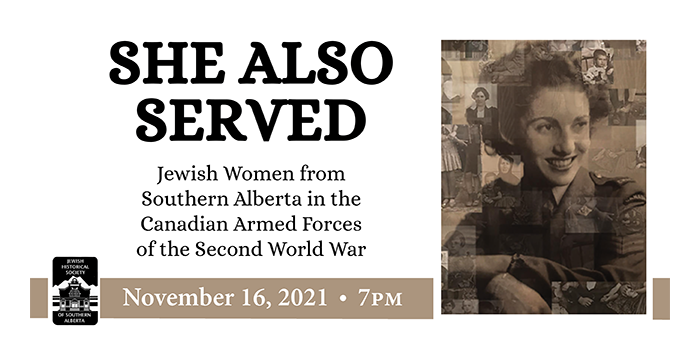 (AJNews) – In the spirit of Remembrance Day, the Jewish Historical Society of Southern Alberta (JHSSA) and the Calgary Jewish Federation are hosting two events next week specifically dedicated to the role of Jewish women in the military.

On Tuesday, Nov. 16, JHSSA president Saundra Lipton will be presenting on her research about Jewish women who served in the Canadian Armed Forces during the Second World War.

The presentation is based on the She Also Serves project Lipton helped compile for the University of Calgary, which features the stories of 41 female Jewish Second World War veterans and culminated in an exhibition of nine artworks based on their stories.

Of 17,000 Jews who enlisted in the Canadian Armed Force during the Second World War, at least 270 were women.

Lipton told AJNews she discovered this fact when she was conducting research for the JHSSA’s database of southern Alberta’s Jewish veterans who fought in the First and Second World Wars.

“There were so many men and so few women that the women just got buried,” she said. “I decided I wanted to identify these women and bring their stories to the fore, and I wanted to do it for all of Canada.”

The focus of Tuesday’s presentation will be a bit different, focusing on Jewish women with southern Alberta connections who served in the Allied forces.

Through her research, Lipton found just two Calgary and five Medicine Hat women who served in the Canadian Forces during the Second World War. “It would’ve been a rather short presentation,” said Lipton.

While many people are unaware that Jewish people served in the Second World War, even fewer know that women participated, she added.

“I’m hoping people will take away a real pride and awareness of a piece of history that hasn’t been well-taught or documented,” Lipton said.

On Sunday, Nov. 14, the fed is hosting a presentation on Zoom from portrait photographer Debbie Zimmelman about her book Women on the Front Lines, which explores the lives of females in 20 Israeli army combat units.

In addition to Zimmelman’s talk, the event will feature a gallery tour of her photography and a presentation from a female Israeli combat soldier who recently completed her service, followed by a Q&A session.