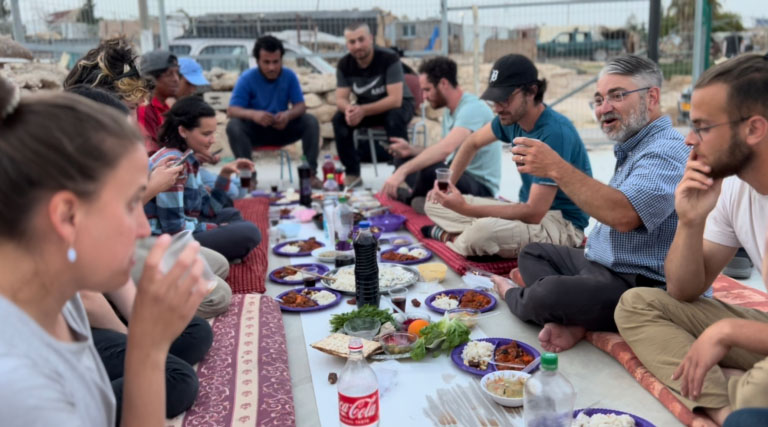 (AJNews) – Both Reform congregations in Alberta co-hosted a July 27 virtual event with an Edmonton-based Jewish linguist who spent time volunteering in the occupied West Bank to protect Palestinian residents from extremist Jewish settlers near Hebron.

Asher Kirchner, who is a professor at the University of Alberta, delivered his presentation on Jewish advocacy for Palestinian human rights to congregants of Calgary’s Temple B’nai Tikvah and Edmonton’s Temple Beth Ora followed by a Dvar Torah from Beth Ora Rabbi Gila Caine.

Earlier this year, Kirchner spent three months in the South Hebron Hills with an organization called Hineinu, which is an offshoot of the Center for Jewish Nonviolence.

Kirchner and his Hineinu peers, which included five American Jews and a non-Jewish exchange student who became interested in human rights work in Israel-Palestine, escorted Palestinian children from the village of Tuba to school in the town of Tuwane. The road from Tuba to Tuwane passes through the Jewish settlement outpost of Havat Maon.

“Since its establishment in the late–1990s, settlers there — grown men — began attacking these school kids. International observers began accompanying the kids to protect them, and they were attacked too, some of them seriously injured,” Kirchner explained.

Throughout his powerpoint presentation, Kirchner provided video footage to back up his claims of settler violence against Palestinian civilians, as well as international and Israeli volunteers, including those form Hineinu.

In addition to accompanying children to school, Hineinu accompanies Palesitnian shepherds as they lead their goats and sheep out to pasture.

“Some days were peaceful, but often increasingly, as winter gave way to spring, these shepherds would get harassed or even attacked by settlers. Sometimes the settlers stole sheep, sometimes they injured the sheep, or sometimes they tried to chase the shepherds off their [own] land. Sometimes settlers cut down olive trees. Often settlers would graze their own flocks on Palestinian land,” Kirchner said.

Since the early-2000s, the Israeli government has ordered the army to prevent settler violence against Palestinians, but Kirchner said this simply isn’t a priority for them. Sometimes the soldiers arrive late, or not at all.

“Not once did they arrest a settler,” he said. “If the authorities intervened at all, it was in the form of an order for both sides to leave the area and go home, striking a pose of neutrality, even though the Palestinians were on their own private land.”

He also discussed the routine demolition of villagers’ homes by Israeli authorities who don’t recognize the Palestinian villages, including the impending eviction of more than 1,000 Palestinians from the district of Masafer Yatta to create a firing zone for the Israeli military, which the Union of Reform Judaism in the U.S. has called on President Joe Biden to prevent. “But our Canadian Reform Jewish institutions have thus far remained silent, as far as I’m aware,” Kirchner added.

For Kirchner, the highlight of his time in the West Bank was a joint Iftar dinner and Pesach seder the volunteers arranged with their Palestinian hosts, with Kirchner making matzo ball soup and “conversations weaving back and forth between English, Arabic and Hebrew.”

“Peace between Jews and Palestinians already exists,” he said. “I saw it with my own eyes. It’s present in the relationships of deep trust and solidarity that have been forged between Palestinian and Jewish activists. If the powers that be would just sit back and make space for these nonviolent activists to do their work, I believe they could lead the rest of Israeli and Palestinian society into peace and security for everybody.”

In her remarks after Kirchner’s presentation, Rabbi Caine, who was born and raised in Jerusalem, said she didn’t want to rebut Kirchner but to present a supplemental perspective rooted in Mishnah teachings.

“If this is really about our concern as Jews for the actions of our people, then we each need to be very clear about the perimeters within which we’re working. Are we really speaking here from within as part of our people? Are we really going down into our roots as we do this work?” Caine said, adding that any solution to the conflict must be one that is amenable to Israelis, as well as Palestinians.

Caine urged Jews who advocate for Palestinian human rights to engage with Israeli groups who are working towards the same goals. Not taking Israeli perspectives into account is a form of “cultural colonialism or missionary work,” said Caine.

“I know that on one level we as a people will be held accountable to Palestinians whose lives are continuously disrupted and turned to misery by an occupation of their homes. But on another level, we’re going to be held accountable by future generations of our own people if we cut ourselves off from the nation,” she said.