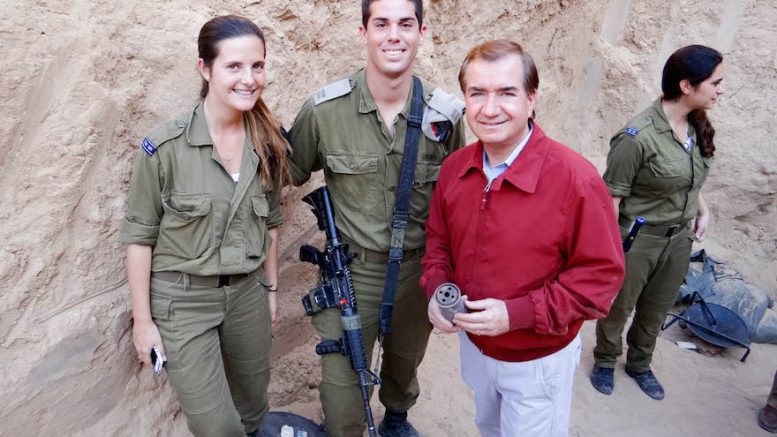 Rep. Ed Royce, in red, at the opening of a tunnel that the Israeli army detected and destroyed a quarter mile from Gaza in 2014. (Courtesy of Royce’s office)

WASHINGTON (JTA) – Reps. Ed Royce and Eliot Engel are that Capitol Hill rarity: a Republican and a Democrat who truly have each other’s back.

And nothing unites Royce, R-Calif., the chairman of the U.S. House of Representatives Foreign Affairs Committee, and Engel, D-N.Y., its top Democrat, like support for Israel.

Not simply Israel – Royce and Engel take their cues on the issue from the mainstream pro-Israel community, led by the American Israel Public Affairs Committee.

Right now, that means keeping the United Nations out of the Palestinian-Israeli conflict, period, while backing a two-state outcome as the best and most likely solution.

So like battle-hardened buddies, the two lawmakers stood together last week to face a roiling Congress as they sought to embody those principles in a nonbinding resolution: condemning the U.N. Security Council for its anti-settlements resolution last month and, by implication, the Obama administration for allowing it through, while upholding the goal of two states, “a Jewish, democratic state living side-by-side next to a demilitarized Palestinian state in peace and security.”

The measure passed, but the obstacles Engel and Royce overcame to get it through demonstrate the erosion of a pro-Israel consensus in Congress: Royce faced down a right-wing agitating for a retreat from U.S. endorsement of “two states,” and Engel grappled with a left wing that seeks more room to criticize Israel.

Royce, in an interview on the eve of the vote, spoke with a confidence borne out with the overwhelming 342-80 vote on Jan. 5: Two states would remain U.S. policy, he said, and the focus going forward, with a Trump administration and a Republican Congress, would be to make sure the world knows the blame lies more with the Palestinians than it does Israel.

“If the president-elect is willing to work with Congress as I think this new administration will be, we can focus on this issue of [Palestinian] incitement,” Royce said, citing plans to cut funds unless the Palestinian Authority stopped payments to the families of imprisoned terrorists.

His party’s right has made it clear that they no longer favor a two-state solution, and the most recent Republican Party platform removed references to the idea.

“A two-state solution has long been the policy of the U.S. government and more importantly Israel’s government,” he said.

Prime Minister Benjamin Netanyahu says he remains committed to two states, although some members of his Cabinet say the idea is outmoded or never supported it in the first place.

Among Democrats, Engel won, but by a narrower margin than a resolution favored by AIPAC: 109-76, with party leader Nancy Pelosi, D-Calif., and Rep. Keith Ellison, D-Minn., a candidate to lead the Democratic National Committee, voting against. Ellison explained that the resolution makes the goal of a two-state solution “less achievable,” and charged that the “Republicans were more interested in attacking President Obama in his last weeks as president.”

How Royce and Engel each faced dissent within his respective party is a telling signal of what’s in store for pro-Israel activism going forward.

Royce, backed by his leaders, crushed a bid by conservative Republicans to remove “two-state” language from the resolution.

Rep. Steve King, R-Iowa, a Tea Party congressman who was one of the first to endorse Donald Trump’s candidacy, advanced an amendment to strike from the resolution any mention of two states.

Royce got the Rules Committee to kill the King amendment before it even came to the floor. On Thursday, prior to the vote, Royce ceded his right to introduce the resolution on the floor to Rep. Paul Ryan, R-Wis., the House speaker. The overall effect was to signal that the big guns in the party were lining up behind AIPAC’s agenda and its commitment to two states, and to bipartisanship.

“Our historic alliance with Israel transcends party labels and partisan bickering,” Ryan said. “We see that bipartisanship right here on the House floor today in condemning this anti-Israel resolution.”

Engel, by contrast, delivered a mixed message. He stood by the resolution he coauthored with Royce while simultaneously agreeing to back an amendment introduced by Rep. David Price, D-N.C., and backed by J Street, AIPAC’s left-wing rival. Price’s amendment would have removed language blaming the Obama administration and placed more emphasis on the two-state solution.

As Engel no doubt expected, Royce had the Rules Committee nix it along with King’s the day before the vote.

Speaking to JTA on the night before the vote, Engel sounded torn between the two versions, fluctuating between the outrage he felt toward the Obama administration for abstaining on the U.N. Security Council resolution and not exercising its veto power, and his attraction to the more positive message in Price’s amendment.

Engel attached his name to Price’s amendment, and so an odd scene played out on the floor the day of the vote. Usually the main sponsor of a piece of legislation calls on other lawmakers who support it to speak on its behalf, while a House member is chosen by the opposing party’s leadership to decide who should speak against it. When a resolution has bipartisan support, the lead sponsors take turns asking members of their party to speak.

On Thursday, Royce directed Republican traffic in support and Engel led the Democrats – but he also ceded some control to Price, who in turn solicited speeches by Democrats who shared his opposition to the resolution.

Thus there was a three-way debate on the merits of the resolution and of Price’s amendment — although it was now moot – and on what it means to be pro-Israel.

Each speaker included a declaration of affection for Israel and an expression of commitment to its alliance with the United States.

For Royce and Republicans, the emphasis was on the nefariousness of the United Nations and the recalcitrance of the Palestinians. Engel’s Democrats stressed upholding the U.S.-Israel alliance and preserving the two-states option. Price and the Democrats who backed his amendment focused on saving Israel from its government.

“In this period of great geopolitical turmoil and uncertainty, we must reaffirm those fundamental aspects of our foreign policy, including our strong and unwavering support for Israel, while also demonstrating to the world that we are committed to a diplomacy that defends human rights and promotes Israeli and Palestinian states that live side by side in peace and security, a formulation that has characterized our country’s diplomacy for decades,” Price said.

There was even a brief fourth argument, calling itself pro-Israel, voiced by Rep. Louis Gohmert, R-Texas, in favor of removing two-state language.

“I can’t vote for the resolution when we are advocating what Joel 3 says will bring judgment down upon our nation for trying to partition Israel,” he said, citing a biblical warning of divine judgment on nations that try to “divide up” the land God gave to the Jewish people. Gohmert was one of four Republicans who voted against the Royce-Engel measure.

The outcome allowed all the competing visions, save perhaps for Gohmert’s, to claim victory. AIPAC applauded passage, saying the Royce-Engel resolution “reiterates congressional support for direct, bilateral Israel-Palestinian negotiations resulting in a two-state solution that resolves all final status issues.”

J Street said the robust Democratic turnout for the Price’s amendment, which the liberal Jewish Middle East policy group backed, underscored the inroads it had made.

“A very significant portion of the Democratic Party is saying that there is no longer going to be a go-along-to-get-along approach for every single policy and worldview for the sitting government of Israel,” Jeremy Ben-Ami, J Street’s director, said in an interview just before the vote. He correctly predicted that 70 or so Democrats would be opposed to Royce-Engel.

AIPAC’s influence is not under immediate threat. Among those in the House who declined Price’s entreaties and backed the Royce-Engel resolution bill were Jewish progressives like Jamie Raskin of Maryland, Jerrold Nadler of New York, David Cicilline of Rhode Island and Jared Polis of Colorado. King, the Iowa Republican who had tried to remove the “two-state “ language, ultimately voted in favor, too.

In the Senate, meantime, where AIPAC is backing a similar resolution, the two lead Republican sponsors, Marco Rubio of Florida and Tom Cotton of Arkansas, just months ago had declined to sign an AIPAC-backed letter to Obama urging him not to take action because it included references to two states. Now they are on board with the concept.

But the divisions are not disappearing. Price is reintroducing his amendment as a separate resolution. King has legislation in the pipeline saying the House “rejects” the two-state solution, explaining that the approach “has failed to result in a secure environment for either Israel, a free country, or the Palestinians, who are led by Islamists and autocrats.”

Rep. Jan Schakowsky, D-Ill., once an AIPAC stalwart and now a headliner at J Street conferences, offered a contrasting vision of pro-Israel. In her remarks during the debate, she called the U.S.-Israel bond “unbreakable” and the two-state solution “the only way Israel can continue as both a Democratic and a Jewish state” while declaring that the United States must be willing to tell its friends in Israel that “the building of settlements is an obstacle to achieving that goal.”

“I stand here as a proud Jew and someone who, throughout my entire life, has been an advocate for the State of Israel,” she said, “and I am standing here to oppose” the Royce-Engel resolution.