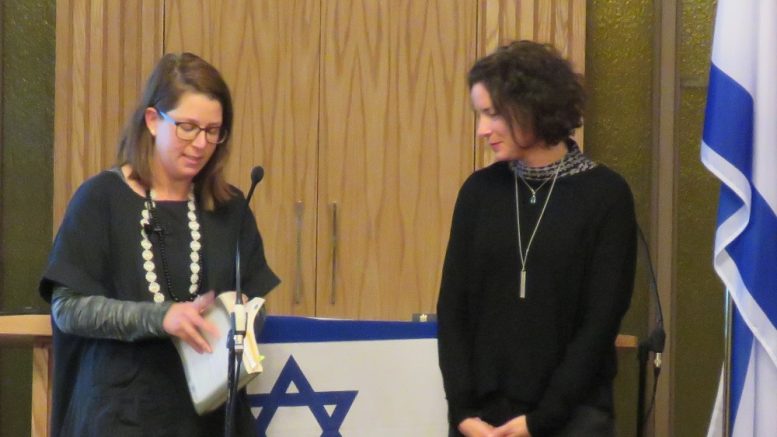 (November 8, 2018) – My thoughts this week go to Remembrance Day, and so not to our Torah portion but rather to Sefer Bamidbar (Numbers).

“You shall then stay outside the camp seven days; every one among you or among your captives who has slain a person or touched a corpse shall cleanse himself on the third and seventh days” (Ba’Midbar 31:19).

I would like to share a teaching relating to this portion in Torah from the book “Maps and Meaning: Levitical models for contemporary care” (Wiener and Hirschmann, 2014), a book which talks about being “inside” and “outside” the camp (i.e. our community, nation, human society). What happens with us after the war? How do we come back into civilian/civil society after being through the terror and trauma of battle?

We know today that the trauma suffered by soldiers, can be transmitted onto their families and communities, much like the idea of t’umah (ritual uncleanliness) being something which can move from person to person and even from thing to person. A society which doesn’t cleanse its soldiers from the blood of battle, is allowing the battle to creep into our homes, pubs, schools, synagogues. It allows the t’umah of war to enter, remain and grow in our lands even years after the war has ended.

In Ba’Midbar 31 we read of a terrible battle and deeds that today we would call war crimes, like slaying of captive women and children. But the Hebrew warriors, who had been commanded by Moshe to preform these acts of violence, are then commanded to purify themselves. They, and anyone who has been in contact with the war, must first wait outside the camp for 7 days. And they must clean themselves, their clothes and various objects – with either fire or water.

We won’t go into detail, but please go and read how these warriors were sent to a sort of communal Shiv’ah ceremony. How they were kept as a group, to process and clean and make a border between their time of death and their time of life.

Sometimes war must happen and sadly we don’t always get to choose – sometimes there are those who want to kill us and then we must react and protect our home, family and friends. But we do have a choice about whether war is part of our ongoing life or not.

Coming out of the war in Afghanistan, Rabbi Koppel (a U.S. rabbi and army chaplain) created a cleansing ceremony for the troops leaving that war, a “Ritual of Transition”.  It is a communal ritual where at some point the participants write down for themselves those things they want to leave behind – and then, much like our warriors in Ba’Midbar, they pass these notes through the fire and burn them – letting go of all which is written there. They say these words “Dear G-d, as we watch these flames ascend to Your holy throne, our hearts are torn with grief for all our losses, for all the pain we have experienced and for the death and destruction we may have caused….allow us to leave behind what needs to remain behind, and emerge from this deployment with peaceful hearts.” (there, p. 180).

This year we are commemorating One Hundred years since the Armistice, a hundred years soaked in blood which just keeps flowing all around our world.

We need to let the fire and tears of war out of our body and soul, not just through talking and praying and wishing for Peace. We first need a world-wide cleansing Ritual for we are all contaminated by death.

May we know Peace and Healing in our days, Amen.

Rabbi Gila Caine is the Rabbi at Temple Beth Ora, a Reform congregation in Edmonton Alberta.

Be the first to comment on "Rabbi Gila Caine: Thoughts on Remembrance Day"