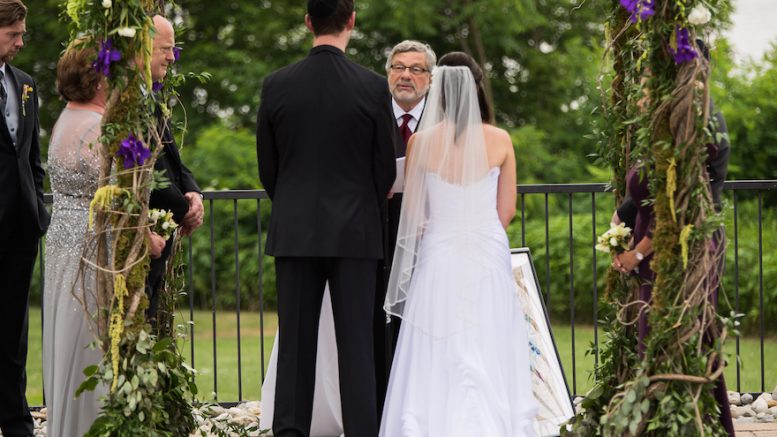 Rabbi Seymour Rosenbloom officiating at the wedding of his stepdaughter and her fiance in 2014. (Courtesy of Stefanie Fox)

An ordained Conservative rabbi for 44 years, Rosenbloom was expelled by unanimous vote last month, with abstentions, after a hearing of the R.A.’s Executive Council. Since 1972, the Conservative movement has prohibited its rabbis from officiating at or even attending intermarriages.

Rosenbloom told JTA the council member suggested he might be able to retain his membership in exchange for a promise not to perform any more intermarriages. Rosenbloom declined the offer.

“I don’t have animus toward the R.A.,” Rosenbloom told JTA Friday. “It’s a futile policy, a policy that will eventually be overturned because the trend of history is against it. I have no bitterness… I don’t feel shunned or like an outcast.”

Rosenbloom, 72, is the retired rabbi of Congregation Adath Jeshurun, a 158-year-old synagogue near Philadelphia. He officiated at his first intermarriage, between his stepdaughter and her fiancé, shortly after retiring in the summer of 2014. Since then, he has performed four additional intermarriages and has plans to conduct two more.

The R.A. wouldn’t comment on Rosenbloom’s expulsion, but its executive vice president, Rabbi Julie Schonfeld, said the movement is constantly discussing how to approach the growing number of marriages involving Jews and non-Jews. Still, she said, the Conservative movement’s fealty to halacha, or Jewish law, mandates a ban on performing intermarriages.

Reform and Reconstructionist rabbis are allowed to perform intermarriages, while Orthodox rabbis, also citing Jewish law, do not.

“We are a halachic movement and Judaism envisions the marriage ceremony as taking place between two Jewish people,” she told JTA. “Through the lens and the vehicles offered by Jewish law and tradition, that’s the avenue that’s open to us in terms of a Jewish matrimonial ritual.”

By performing mixed marriages, Rosenbloom feels like he’s simply acknowledging reality. The Pew Research Center’s 2013 study of American Jews found that the intermarriage rate among non-Orthodox Jews since 2005 rose to 71 percent. And a recent study from Brandeis University found that interfaith couples married only by a rabbi are significantly more likely to raise their children Jewish than those married by no rabbi or clergy of different faiths.

“We’re isolating ourselves from our congregants at precisely the time they need us and want us most,” Rosenbloom said. “For many of these couples, once we say no to the wedding, it’s very hard for them to overcome that. The experience of rejection is far too great to even consider being part of the congregation.”

For Rosenbloom’s first intermarried couple, the synagogue has felt more welcoming because of their Jewish wedding, which included traditional elements like ahuppa, or wedding canopy, and the breaking of a glass. Stefanie Fox, Rosenbloom’s stepdaughter, and her husband recently held a baby-naming for their infant at Rosenbloom’s home, and the family regularly attends services at Adath Jeshurun. She and her husband have discussed his converting, though he has no immediate plans to do so.

“It’s always been my feeling that rather than push away people of other religions, it makes sense to pull them into our Jewish community,” said Fox, 32. “My husband is a big part of my Jewish life now. I almost feel like we’ve increased our Jewish community in the world today.”

Expulsion from the R.A., a 1,700-member body that places rabbis in congregations and sets their professional standards, is a relatively rare event. The last expulsion, according to Schonfeld, occurred a year and a half ago, though she could not say why. Because Rosenbloom is retired, the expulsion will have little practical effect on him.

But Rosenbloom isn’t the only rabbi breaking from the movement over intermarriage. Rabbi Adina Lewittes decided to leave the R.A. three years ago so she could perform interfaith weddings. Lewittes said she is hearing from an increasing number of Conservative rabbis who agree with her stance privately.

“I’m very intent in using my opportunity with the couple to convey to them we celebrate them but we also have expectations that they will continue to be engaged with Judaism and the Jewish people,” said Lewittes, rabbi of Sha’ar Communities, a network of small Jewish communities in New Jersey.

Many Conservative synagogues, while not performing intermarriages, do celebrate the couple ceremonially before and after the wedding, through pre-wedding rituals and by welcoming them as congregants afterward.

“How we work with families where not everyone in the family is Jewish is tremendously important to us,” Schonfeld said. “A tremendous amount of effort is invested by the Conservative movement and the Conservative rabbinate in making our synagogues really welcoming places for everyone.”