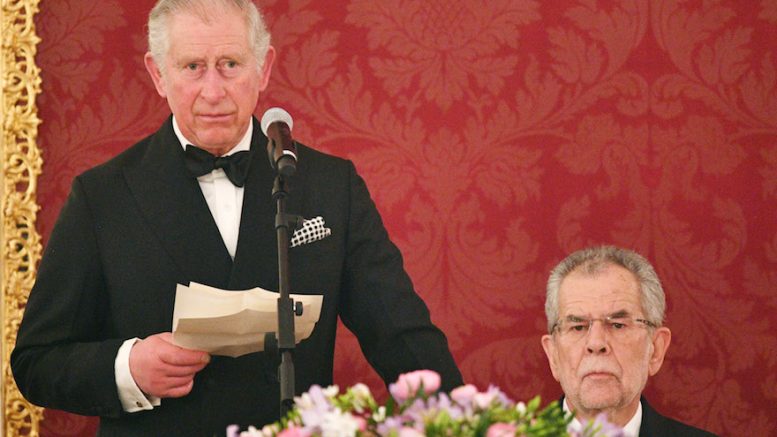 Prince Charles of Wales, left, speaking at the Hofburg Palace in Vienna during a state dinner, April 5, 2017. President Alexander Van der Bellen of Austria is at right. (Tim Rooke/Pool/Getty Images)

(JTA) — Prince Charles of Wales spoke with Holocaust survivors in Austria about his grandmother’s role in saving the lives of a Jewish family during the Shoah.

Charles and his wife, Camilla, spent the final day of a nine-day tour of Europe in Vienna meeting British and Austrian survivors of Nazi persecution at the city’s Jewish museum, the Jewish News of London reported.

The royal couple sat down with a group of elderly men and women who shared their harrowing stories with them. During World War II, Princess Alice, the Duke of Edinburgh’s mother and Charles’s grandmother, sheltered a number of Jewish people when Greece was occupied.

Alice, who is buried in Israel, was recognized by the Yad Vashem Holocaust Memorial in Jerusalem as a Righteous Among the Nations, and was posthumously awarded the British Government’s Hero of the Holocaust medal.

In September 1943, the Cohen family, old acquaintances from the Greek town of Trikala, appealed to Princess Alice for refuge. She hid them in her palace until the Nazis withdrew in October 1944. During that time, the Nazis sent the vast majority of Greece’s Jewish community to concentration camps.

Charles told the group: “My father’s mother took in a Jewish family during the war and hid them – she was amazing, my grandmother. She took them in during the Nazi occupation. She never told anybody, she didn’t tell her family for many years. She’s buried in Jerusalem.”

Princess Alice’s remains are interred at the picturesque Church of Saint Mary Magdalene, above the Garden of Gethsemane, on the Mount of Olives. Charles said he visited the grave last September while attending the funeral of Shimon Peres, a former president and prime minister of Israel.

Holocaust survivor Gerda Frei, 80, who had escaped Vienna with her mother and father to Hungary in 1938, had a chance to chat with Charles at The Jewish Museum Vienna.

“The prince was very well informed about the Holocaust, and it is very important that they came here,” she said after the chat.

Frei and her parents were hidden from the Nazis by a family in Budapest.