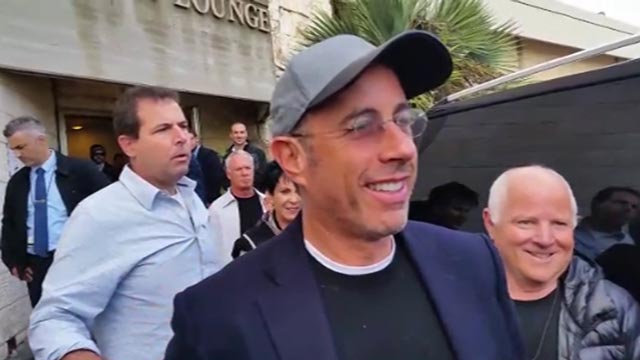 Jerry Seinfeld lands at the Ben Gurion Airport in Israel on December 18 in advance of 4 sold out shows at a stadium in Tel Aviv.

The episode, the first in the show’s seventh season, will air Dec. 30 at comediansincarsgettingcoffee.com, according to CBS News.

In the episode, taped Dec. 7 at the White House, Obama and Seinfeld, who is Jewish, take turns driving around the South Lawn of the White House, then walk through various rooms of the presidential mansion before having coffee in a basement dining room.

“Growing up in the ’60s. my kid dream was always to be an astronaut — doing a comedy show with President Obama in and around the White House felt like going into space,” Seinfeld said in a statement about the episode. “Being president and just a cool guy to hang out with at the same time made the experience my own personal moonwalk. It was an unforgettable day.”

Obama is the first elected official to appear on the program.

Seinfeld, who starred in the eponymous hit TV show in the 1990s, performed in Israel for the first time this weekend, doing four sold-out stand-up comedy shows.

“Oh my G-d, I’m in Israel!” he said at the beginning of his first one-hour show.”Oh my G-d! Unbelievable!”

“Look at yourselves – how proud are you of yourselves?” he asked the sold out crowd. “How proud are you that you got tickets to this show?” he asked, and the audience responded with wild applause acknowledging the speed with which the shows sold out.

Seinfeld did not discuss the security situation or talk specifically about Israel during his routine.

The comedian, who starred in the eponymous hit TV show in the 1990s, last visited Israel in 2007 when he was promoting “The Bee Movie.” His first visit was in 1971; he was a fifteen year old volunteer in the banana fields of Kibbutz Sa’ar.

During his 2007 visit, he quipped that “When I was 15 and worked in a kibbutz, no one was interested in meeting me. No one wanted my autograph or to be photographed with me. They just let me hack away at the banana leaves.”