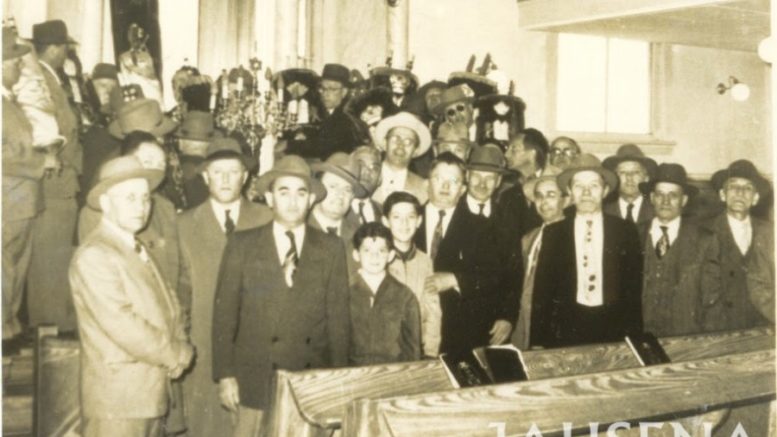 (AJNews) – The Edmonton Jewish community is largely familiar with the acronym JAHSENA, but some may not be aware of the significance and mission of this locally run organization. JAHSENA, or the Jewish Archive and Historical Society of Edmonton and Northern Alberta, has made a pledge of “preserving our community’s heritage from generation to generation.”

In 1893 when Abe Cristall and his wife Rebecca first set down roots in Edmonton, they were looking for new opportunities and fruitful prospects. In reality, they were the trailblazers that planted the initial seeds of what would eventually blossom into the diverse and vibrant Jewish community of today. This, and all that has followed, is the history that JAHSENA works to preserve for generations to come.

Their resources and collection are housed in a modest first-floor space; tiny treasures and artifacts tucked purposefully into every available nook. The sole archivist and caretaker of JAHSENA’s historical holding is Colleen Paull, a dedicated community member and historical detective.

“I was at an event, and a friend asked if I would be interested in serving on JAHSENA’s board,” Paull said. She attended only one meeting before she was asked to assume a position in the office instead of serving as a board member. This role in the office over time led her to become JAHSENA’s archivist.

Eclipsed by a stack of boxes recently procured from Beth Shalom Synagogue, Paull explained that sometimes what one person might think is insignificant, can actually have great historical value. “It can seem like ancient history,” she said as she pulled out a dusty framed photo of the Beth Shalom Women’s League. “I go through everything.  I see if I can identify the people in photographs, and if I can’t, then I ask for help from older members of the community.” Unearthing a stack of old yellowing board minutes, she continued: “Minutes are priceless!  They are so historical – they chronicle what is happening in the community. Sometimes the best way to track our history is through minutes.”

The majority of requests Paull receives are from people looking for information about relatives that once resided in town. With so many online Jewish genealogy projects, however, the public need for archival evidence of generations past continues to grow – especially concerning times of mass immigration.

“People don’t really send postcards anymore, and they’re really interesting. When you look at postcards from Israel, it’s fascinating to compare how the city skylines have developed over the years.”

Paull also inventories such postcards because of the historical insights they provide. “Sometimes, even if I can’t identify people in a picture, if it’s an image taken in front of a boat with a year, and I can clearly tell it’s documenting someone’s immigration arrival, I keep it.” As Paull explained, such little gems as these could yield valuable information for piecing together a family’s settlement in Canada.

Since the COVID shutdown Paull has still had plenty to keep her busy: cataloging, organizing, and researching.  As many people wind down from a summer of home improvement projects or plans to capitalize on the housing market boom and downsize, Edmontonians within the Jewish community are finding themselves confronted, daunted even, by boxes full of old stuff.

“A lot of times people get overwhelmed and don’t want to go through old boxes,” commented Paull. “But there is always the chance that there is something historically significant tucked away in there.  What can be really fruitful are scrapbooks.  People collect articles and pictures and other memorable things related to their family.”

Paull’s excavations have revealed old letters detailing experiences of immigration, class albums from the earliest days of Talmud Torah, and even jerseys and pins from the Maccabee Games of years past.

“Of course, I don’t keep everything, but what we have here,” she said gesturing to shelves of books and archival boxes lined with acid-free paper, “all of this tells a really interesting story about Jewish civilization in this area.”

For locals previously unfamiliar with JAHSENA, the work Paull continues to dedicate herself to is a treasure trove of information and stories yet to be told. Perhaps that box of grandma’s old papers is taking up space in the basement, but to Paull and the JAHSENA collection, it has the potential to unlock forgotten secrets from generations past.

“People often want to keep pictures, which makes sense, so in those cases I digitize them for our records.”

For those with limited mobility, or who for any other reason have trouble relocating their boxes of soon-to-be rediscovered history, Paull is even willing to come collect donations.

“If people are wondering whether or not they have something historically significant, it’s better to ask before discarding it,” she explained. So, before boxes get moved to the curb, give Colleen Paull a call at (780) 489 2809, and add your piece to the tapestry of Edmonton’s Jewish history.