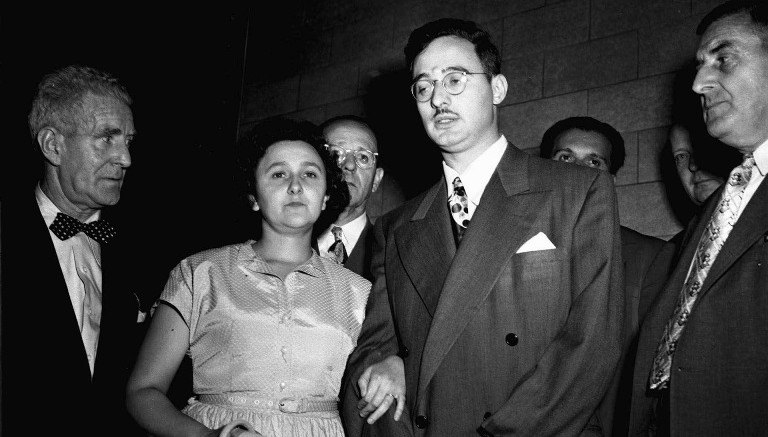 Ethel and Julius Rosenberg are shown during their 1951 trial in New York for stealing atomic bomb secrets for the Soviet Union. Photograph: AP

(JTA) — Newly unsealed court records may provide fodder for those who believe Ethel Rosenberg was wrongly convicted and executed.

Rosenberg and her husband, Julius, who were Jewish, were famously put to death in 1953 in Ossining, New York, for conspiring to share atomic secrets with the Soviet Union.

The potentially exculpatory material is in testimony by Rosenberg’s brother David Greenglass that was unsealed Wednesday, The Associated Press reported. Greenglass, who died last July at 92, was the lead witness in the McCarthy-era case against the Rosenbergs.

In the 1951 trial, Greenglass said he shared information he had obtained from the Los Alamos, New Mexico, headquarters of the Manhattan Project with the Rosenbergs and that he saw Ethel Rosenberg transcribe the information on a typewriter in 1945.

In the newly released 46-page transcript of a grand jury hearing on Aug. 7, 1950, which is believed to be the last material from the case to have remained classified, Greenglass made no mention of his sisters’ typing and said he had never discussed spying with her.

Greenglass, who was indicted as a co-conspirator, served nearly 10 years in prison, then changed his name, The New York Times reported.

Tracked down decades later by a New York Times reporter, Greenglass said he had lied on the witness stand to save his wife from prosecution, according to the Times.

Greenglass said in the 1950 testimony that while his brother-in-law urged him to stay in the U.S. Army in order to “continue giving him information,” he never spoke to his sister about the topic.

“I said before, and say it again, honestly, this is a fact: I never spoke to my sister about this at all,” he said.