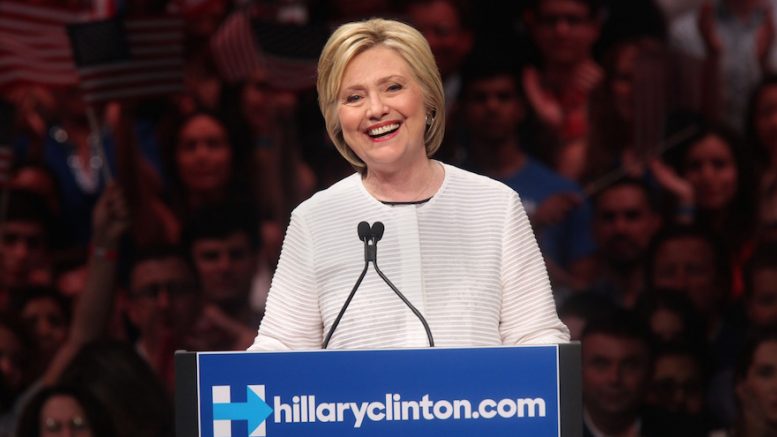 NEW YORK (JTA) — It happened all at once and not to me alone.

There was Hillary Clinton, in her June 7 victory speech, honoring her mother’s memory; saluting her daughter, Chelsea; paying tribute to herself for raising such a child, and claiming her party’s nomination as the “milestone” it is.

“I really wish my mother could be here tonight,” Clinton said. “I wish she could see what a wonderful mother Chelsea has become and could meet our beautiful granddaughter, Charlotte. And of course, I wish she could see her daughter become the Democratic Party’s nominee for president of the United States.”

I suddenly understood why I identify with Hillary Clinton, and why that’s important to me and to other older Jewish women – her contemporaries.

It has little to do with the details of our careers; even less with politics or party affiliation. It has nothing to do, in my case, with our shared Wellesley alumna status, and won’t necessarily translate into “likeability” (how I hate that word) or votes.

It has everything to do, I believe, with several tenets of Jewish tradition and culture that became the warp and weft of our lives and, it now seems to me, that of Hillary Clinton.

“Vindicated,” “valued,” “affirmed.” I’ve spoken with an admittedly unscientific sampling of women in the past few days – baby boomers from across the Jewish and political spectrums, plus the most spiritually Jewish non-Jew I know. They include married and un-; with kids and none; only children and those with siblings. They all heard that moment in Clinton’s speech as mutual appreciation – “a kindred spirit giving herself and us our due,” as one woman said – for a job well done in the pivotal family role we’ve played.

By that we mean not simply assuming the matriarch mantle without question and devoting ourselves to in-law, parent, sibling, spouse or child – even those with whom we have shaky relationships. We mean doing so without a sense of sacrifice or regret; without allowing our debtors to know that they’re in our debt.

“We didn’t feel as if we were sacrificing anything,” said another woman. Rather, we were playing an important role that Judaism has traditionally valued. She was recalling when her kids needed to be the center of one parent’s life and knowing that she would be that parent.

Yet another noted that as with Clinton, the former secretary of state, U.S. senator and first lady, it’s usually been outsiders who have declared us silent sufferers. Younger women, in particular, often seem troubled reconciling our sense of fulfillment as partners and spouses, daughters and mothers with our passionate pursuit of a feminist agenda.

We lack resentment, except toward family members who assume that we want to shoulder these responsibilities alone. Why we don’t routinely disabuse them is a curious question. Perhaps we’re afraid they’ll say no.

Otherwise parading pride in our handiwork or suggesting to the care-given that we have martyred ourselves on their account would undo all that we accomplished. Which is one of several reasons I think we, like Clinton, have stayed mum on this subject. (The other being we think it’s nobody else’s business.)

What words can we use that won’t translate into lifelong guilt and “you owe me” or the debilitating message that “I made you what you are” for people we’ve nurtured to stand on their own? None, as Clinton clearly knows.

Dominique Browning, author of “Slow Love: How I Lost My Job, Put on My Pajamas, and Found Happiness,” wrote in a recent New York Times essay: “At the end of the Brooklyn rally, she and Bill clasped each other tightly, and I choked up at the durability of that bond.”

So did many of my contemporaries who believe that Hillary Clinton’s silence on that subject, while she loudly advocated for children’s health care, gun control and other social justice issues, was a sign of strength, not weakness. It signaled the value she accords her role – and thus ours – in these kinds of family relationships.

Clinton’s Brooklyn speech also testified to her kinship with an ancient Jewish moral imperative that Hillel the Elder declared and our mothers taught by example: “If I am not for me, who will be for me? And when I am for myself, what am I? And if not now, when?” (Pirkei Avot 1:14)

Hillel was exhorting us to advocate for ourselves (no one, after all, will fashion our lives for us), but to be ever mindful of the kind of selves for whom we’re advocating: those whose actions isolate them from others, or whose actions embrace others to benefit family, community and society at large.

Channeling Hillel, Clinton told the Brooklyn crowd: “My mother believed that life is about serving others. And she taught me never to back down from a bully, which, it turns out, was pretty good advice.”

It was the prompt I needed, another spark of mutual recognition that Hillary Clinton has tried to live that life and follow her mother’s advice – as have we all.

Be the first to comment on "op/ed: Why Jewish moms are celebrating with Hillary"