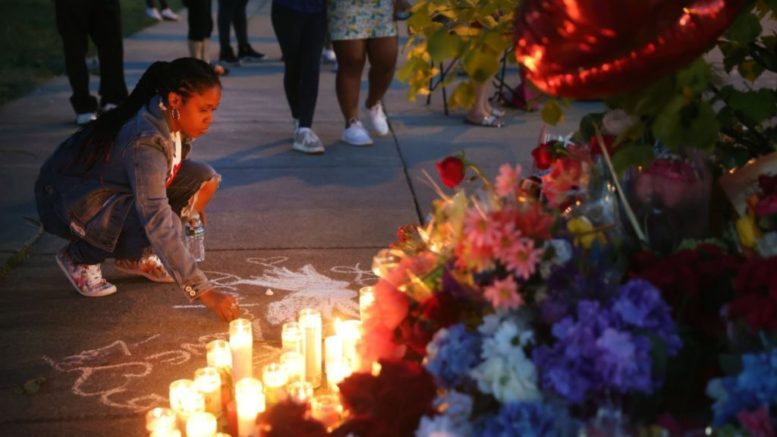 (Hey Alma via JTA) – The past Saturday, a white supremacist murdered 10 people in a supermarket in a Black neighborhood in Buffalo, NY. The bravery and quick action of security guard Aaron Salter Jr. likely saved additional lives. My words can only insufficiently capture the impact those killed had on their communities: Ruth Whitfield was a mother of four, a grandmother of eight, and a fixture in her church choir. Andre Mackniel was shopping for food his 3-year-old son’s birthday party. Heyward Patterson drove people to the supermarket and used that money to support his three children.

There are circles of trauma that radiate out from the individuals lost. Their partners, their children, their churches, their friends — all these people have been robbed of meaningful relationships due to the actions of one armed white supremacist, the internet forums and chats that enabled him and a country that is continually wracked by gun violence and racially-motivated hate.
While we can count the dead, no number could hold the grief of that impacted community, or the fear of innumerable communities around the US that fear they might be next.

I am a survivor of a white supremacist terror attack. I am reminded of this most days when my PTSD gets triggered, and I am ripped out of the present and violently returned to the past.

Yet I can benefit from white supremacy.

Depending on whom I ask, I am either a white Jew or a white-passing Jew. I can walk down the streets in my current home of Berlin or in my birthplace of Pennsylvania and easily blend into the white-majority culture.

It helps, of course, that I am not an Orthodox Jew, but an egalitarian Jew. I share an observance of Shabbat and kashrut and davening with my Orthodox peers. My behavior and my vocabulary mark me as Jewish. Yet my clothing, what I wear on a daily basis, does not clearly mark me as Jewish: I never wear a kippah, and the headband or scarf I wear daily as a kisui rosh, or head-covering, could just as easily be a fashion statement or an effort to conceal a bad hair day.

I am the first to feel the safety of anonymity, of appearing to belong to the majority, stripped away when I step into a Jewish space — whether a synagogue, my university or an office. Most days of the week, I enter such a space and armed guards check my bags. I see the cameras swivel to capture my face as I walk through the door. I see the shadows cast by the bars on lower-story windows, or the weird reflections of light through bulletproof glass.

Many synagogues would describe themselves as a kehillah kedosha, or a holy community. But when I think about the ways in which many Jewish institutions are complicit in white supremacy, I fail to see the holiness and instead see a space becoming not only profaned, but unsafe for many who seek entry.

At the same time, we make decisions as Jews, whether as individual, family or community, to help protect us from white supremacy. I wish this weren’t necessary, but, for now, it is. I could use the language of choice — we choose to have guards at synagogues. We choose to have detailed exit plans. We choose to have metal detectors — but such language fails to grasp that our decision is made under duress. It is not a free choice, but one made of fear that if we fail to act, the next attack will be in our community. The next dead will be our parents, our partners, our children.

To paraphrase a rabbinic idea, we feel the need to build walls around our synagogues as well as around the Torah.

The rabbis, our sages, were not perfect themselves. In the Talmud, a large section of Tractate Gittin details the inaction of the rabbis and connects it to the destruction of the temple in Jerusalem. The rabbis, it turns out, were so paralyzed by choice that they froze. Their wrongdoing didn’t come in the form of a bad choice; it was inaction.

The Buffalo gunman appears to have been driven, at least in part, by something known as “replacement theory” — once a fringe conspiracy theory contained to the far right, it’s become more mainstream in recent years, even becoming a fixture on “Tucker Carlson Tonight.”  This “theory” posits that those in power, often portrayed as Jews, are trying to “replace” white Americans by increasing immigration, particularly from Central and South America, which would then cause white Americans to become a minority and lose power.

In the wake of this racist attack in Buffalo, the Jewish community has a chance to commit itself to fighting white supremacy. It seems like a no-brainer, as antisemitism is a major tenet of that hateful ideology. We cannot let our fight against it focus only on its embodiment of antisemitism. We need to fight against the other hateful ideologies it encompasses, including being anti-Black, anti-Brown, anti-Muslim, anti-immigrant and anti-woman.

Our Jewish communities need to partner with other impacted communities. Some communities are already doing this, and others need to start. We are not only stronger together, but safer together. We must hear the plea of our fellow humans and heed it. In that process, we must keep reminding others that antisemitism is a core tenet of white supremacy. We enter this work not only as allies, but also as a people who has been decimated by white supremacy — both recently and in the last 100 years.

Inter-community work, however, might still be easier than intra-community work. Because alongside meaningful partnerships, Jewish spaces need to do their own chesbon nefesh, or accounting of the soul, and ask how they are complicit in other aspects of white supremacy.

Action now cannot bring the dead back to life. Buffalo, NY joins a group of communities that stretches around the world, from Pittsburgh, PA to El Paso, Texas to Christchurch, New Zealand to Halle, Germany and sadly, the many communities who know a clear before and a murky after goes on.

We still must act. Our inaction makes us complicit. We are capable of better.

Paige Shoshannah lives, works, and schmoozes in Berlin. When she’s not teaching about National Socialism and the Shoah, she enjoys learning more about Jewish life as well as Jewish history in Germany and beyond.

Be the first to comment on "op/ed: Jews need to fight white supremacy"