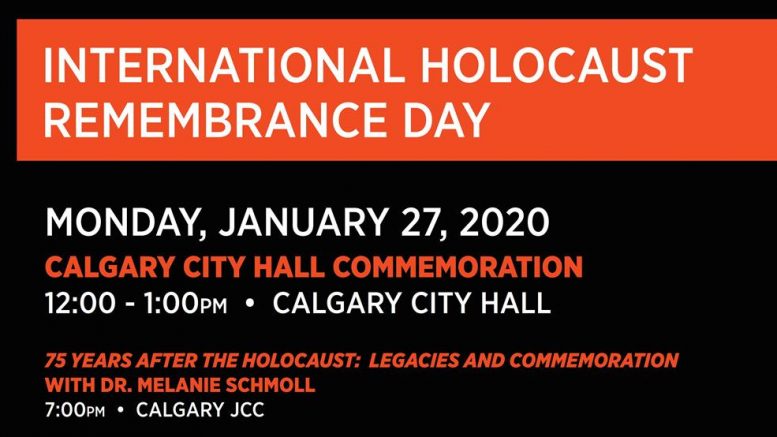 (Calgary AB) – On Monday, January 27, the City of Calgary will, for the first-time, recognize and commemorate International Holocaust Remembrance Day at Calgary City Hall. This global day of remembrance tells the stories of courageous Survivors, and honours the 6 million Jews and 11 million other individuals who perished in the Shoah (Holocaust).

January 27th will mark 75 years since the liberation of Auschwitz -Birkenau, an event first commemorated by the United Nations in 2005. Although this day is recognized world-wide and sanctioned by the United Nations, only a handful of municipalities in North America officially recognize this day, including: New York, Windsor and, most recently Calgary and Toronto. Canada, who became a member of the International Holocaust Remembrance Alliance (IHRA) in 2009, first officially recognized International Holocaust Remembrance Day in 2015. However, for local Jewish communities, government recognition is so much more than ceremonial or symbolic.

Formal acknowledgement of International Holocaust Remembrance Day has always gone hand-in-hand with initiatives to recognize, condemn, and act against anti-Semitism. When International Holocaust Remembrance Day was first declared by the United Nations in 2005, it came as part of a greater initiative, Resolution 60/7 , which encouraged countries to develop educational programs about genocide, condemn religious intolerance, incitement, harassment, or violence based on ethnic origins or religious belief.

With a rise in anti-Semitism across the globe, and especially in North America, Calgary’s official recognition of this day could not be more timely. Recent polling has revealed a shocking lack of knowledge of the Holocaust, among Canadian teens and young adults. In the same breath, Statistics Canada reports that Jewish people are the most frequently targeted group when it comes to police-reported hate crimes.

Calgary is home to a Jewish community of approximately 8500, with many direct descendants of Holocaust Survivors. With an ever-decreasing number of living Survivors, Jewish Calgarians alone cannot, and should not, be solely responsible for telling and preserving their stories. It is up to each of us to preserve these stories, which are imperative to overcoming the hatred and discrimination that we see today.

Calgarians alike should be proud that our city’s Mayor and City Council, have led by example in both recognizing the historic atrocities committed against the Jewish people, and ensuring that actions back these words. Too often in our people’s history, we have faced this hatred alone; our neighbors, bystanders. Behind the words and actions of our City Council, all Calgarians will say “Not us. Not here.”

On Monday, January 27th , Calgarians of all stripes are invited to come together at Calgary City Hall from 12:00 – 1:00pm to not only honour the victims of the Holocaust, their families and loved ones, but to also show solidarity against hatred, anti-Semitism and discrimination. Details of the day can be found on Calgary Jewish Federation’s website at jewishcalgary.org. You can also be part of the conversation online by sharing the global hashtag #WeRemember.

Be the first to comment on "op/ed: Commemoration is Key to Fighting Antisemitism"