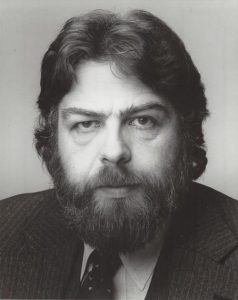 Alan Bleviss passed away at home in New York City on December 30th, 2017 after a 25-month battle with lung cancer. He is survived by his beloved children Lisa Aviva, Joshua Eli and Sarah Jenny. Alan is predeceased by his parents, Joe and Lee, and his siblings, Morley and Sharon. Alan was born in Edmonton, Alberta to an entrepreneur/former owner of Hub Cigar and doting mother.

Alan was incredibly devoted to his work, having said “I love to create, I love the people and I love to work!” He was known for his versatile, booming and warm voice that he credits to his theatrical training.

One of the leading voice-over actors of his generation, Alan was the voice behind the movie trailers for Scarface, Dirty Dancing, Ragtime, and countless other classics. He was the voice of the Democratic Party, including most recently Bill Clinton and Joe Biden, as well as Pampers, American Express, MasterCard, TNT, AT&T, Enterprise Car Rental and virtually every blue chip company through the 1980s and 1990s.  He won six Clio awards throughout his career, the top award in the advertising field. Alan also won an award from the Cannes International Film Festival in 1985.

Alan was a graduate of the University of Alberta (BA, Drama, 1963) and the École Nationale de Théâtre/National Theatre School of Canada (Acting, 1966). A generous philanthropist, he funded the Bleviss Laboratory Theatre at the University of Alberta and the Bleviss Family Library at the National Theatre School of Canada. Alan was incredibly passionate about both education and the performing arts. He served on the Board of Directors and as a lifetime Governor of the National Theatre School of Canada, and endowed two scholarships to help University of Alberta students pursue theatre: the Graduate Award in Drama and the forthcoming Bleviss/Motkovich Family Undergraduate Prize in Drama. He also supported numerous Jewish causes, including Eyes from the Ashes. Alan was a firm believer in a free and accessible education for all.

Alan was known internationally for his sonorous, honeyed tenor. He was also known among family and friends for his jovial sense of humor, love of dobermans, early passion for fencing and dedication to mentoring younger artists.

Alan was a former president of the Civil War Token Society. He began collecting civil war tokens in 1994 and collected thousands over two decades. A well-known collector, he auctioned off 500 items from his collection in 2009, described by the auctioneer as “one of the most extensive holdings ever assembled.”

A strong believer in unions, Alan was a member of ACTRA, SAG, AFTRA and EQUITY for nearly four decades. He brought his children to picket alongside him when his unions were on strike. He served as a former president and board member of ACTRA – Toronto and as a board member of AFTRA – New York Local.

In his later years, he relocated to Arizona, where he continued to work from home until his retirement. In 2015, he moved back to New York after being diagnosed with lung cancer to be near his daughter Sarah. He spent his last 16 months in New York enjoying visits from his children and partner Tessa, remaining as effervescent and independent as always.

In lieu of flowers, donations can be be made to the National Theatre School of Canada and the University of Alberta.