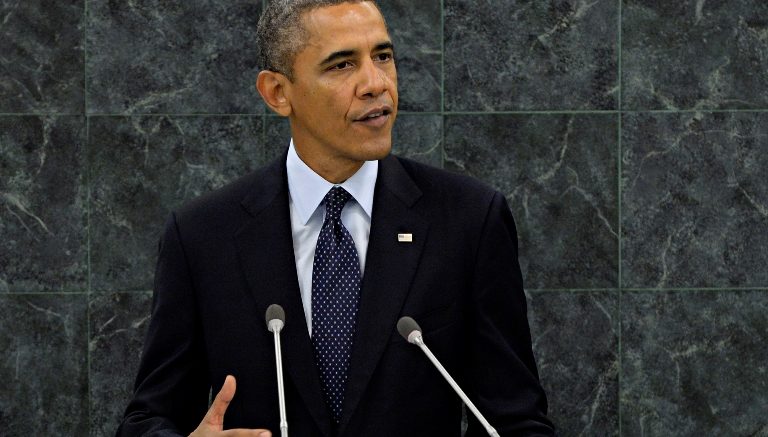 WASHINGTON (JTA) — In his swan song to the United Nations, President Barack Obama again urged the Palestinians to end incitement and Israel to end settlement.

“Surely Israelis and Palestinians will be better off if Palestinians reject incitement and recognize the legitimacy of Israel, but Israel recognizes that it cannot occupy and permanently settle Palestinian land,” Obama said Tuesday September 20, addressing the General Assembly.

It was the sole mention of the conflict in a speech that otherwise focused on the need to tamp down hatred among peoples, faiths and nations.

Israel has been concerned that Obama, in his final months in office, will launch one final bid for Palestinian-Israeli peace, but the lack of emphasis on the issue in his final speech to the United Nations suggested otherwise.

Obama also used Iran as a positive example, citing its agreement last year with six major world powers, led by the United States, to roll back nuclear development in exchange for sanctions relief, and contrasting it with North Korea, which continues nuclear weapons testing.

“When Iran agrees to accept constraints on its nuclear program, that enhances global security and it enhances Iran’s ability to work with other nations,” he said.

Israel opposes the deal, saying within two decades it will free Iran to return to nuclear development and that it allows Iran now to meddle in neighboring countries and back terrorism.

Israel’s government maintains that Palestinian stasis on the peace process is not simply a matter of the continued control of the Gaza Strip by Hamas, a terrorist group, but because even the relatively moderate Palestinian leadership in the West Bank is not prepared to make critical concessions.

“This is an obsession with Israel and it must end,” Danny Danon, Israel’s envoy to the United Nations, said in a statement following Ban’s address. “At a time when Palestinian terror is on the rise in Israel, the secretary-general chose to criticize us and ignore the direct responsibility of [Palestinian Authority President Mahmoud) Abbas and the Palestinian leadership who continue to incite towards terror.”

Be the first to comment on "Obama at UN calls for end to Palestinian incitement, Israeli settlement"