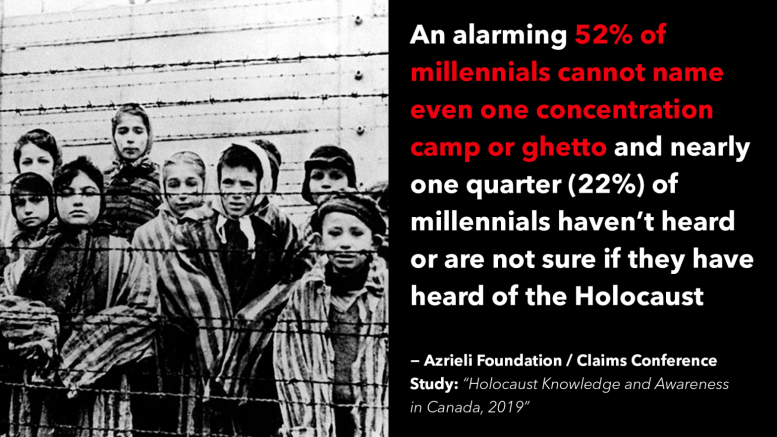 (January 2019) –  Naomi Azrieli, Chair and CEO of the Azrieli Foundation and Julius Berman, President of the Conference on Jewish Material Claims Against Germany (Claims Conference), jointly announced the release of a comprehensive Holocaust Knowledge and Awareness Survey of adults in Canada.

Similar to the April 2018 survey in the United States, the Canadian study found critical gaps regarding awareness of basic historical facts and detailed knowledge of the Holocaust. For example, 54% of those surveyed did not know that 6 million Jews were killed during the Holocaust.

Major findings from the survey include:

Naomi Azrieli, Chair and CEO of the Azrieli Foundation, says, “When we heard about the first Claims Conference study by Schoen in the U.S., we were keen to know how we were doing in Canada. I was shocked and disappointed to see the Canadian results. Clearly there are gaps in our education system that must be filled, because as it stands now, as a society, we are not preparing the next generation to learn from the past.”

Significant gaps in knowledge about the Holocaust that are revealed by the survey include:

Julius Berman, Claims Conference President, noted, “Here we have yet another study showing that Holocaust education falls woefully short, and we must work together to correct this global issue. As the UN International Holocaust Remembrance Day approaches, we are reminded of how important education is if we are to ensure that the atrocities of the Holocaust will never happen again.”

The Holocaust Knowledge and Awareness Study was commissioned by the Azrieli Foundation in partnership with the Claims Conference.  Data was collected in French and English and analyzed by Schoen Consulting with a representative sample of 1100 Canadian adults via landline, cell phone, and online interviews.  Respondents were selected at random and constituted a demographically representative sample of the adult population in Canada.

About the Azrieli Foundation

For 30 years, the Azrieli Foundation has funded institutions as well as operated programs in Canada and in Israel. It supports eight priority areas, with the common thread of education running throughout its funding. Having published the stories of nearly ninety Canadian Holocaust survivors, the Azrieli Foundation has become a world leader in the publication and distribution of Holocaust memoirs in English and in French. The Azrieli Holocaust Survivor Memoirs Program connects edu­cators and students across Canada to these first-hand accounts. The program is guided by the certainty that, when paired with a solid historical foundation, these stories told personally and intimately from the perspective of those who lives through it can have an impact on readers that history texts do not.

About the Claims Conference

The Conference on Jewish Material Claims Against Germany (Claims Conference) a nonprofit organization with offices in New York, Tel Aviv and Frankfurt, secures material compensation for Holocaust survivors around the world. Founded in 1951 by representatives of 23 major international Jewish organizations, the Claims Conference negotiates for and disburses funds to individuals and organizations, and seeks the return of Jewish property stolen during the Holocaust. As a result of negotiations with the Claims Conference since 1952, the German government has paid more than $80 billion in indemnification to individuals for suffering and losses resulting from persecution by the Nazis. In 2019, the Claims Conference will distribute approximately $350 million in direct compensation to over 60,000 survivors in 83 countries and will allocate approximately $550 million in grants to over 200 social service agencies worldwide that provide vital services for Holocaust survivors such as homecare, food and medicine.