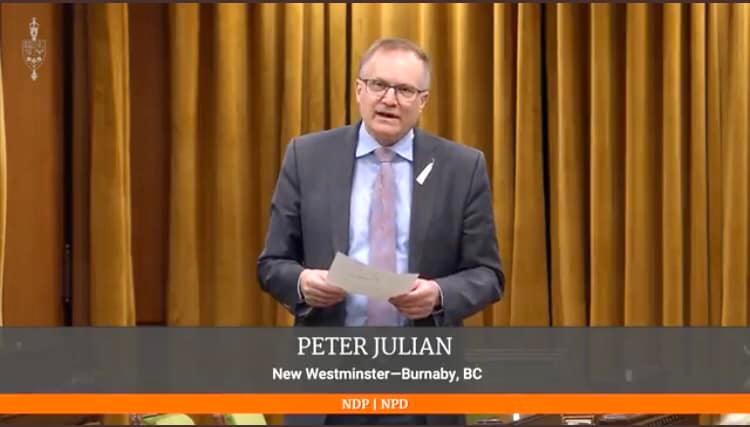 (OTTAWA) – This month, NDP House Leader Peter Julian (New Westminster–Burnaby) tabled Bill C-229, a private member’s bill that would prevent anyone from selling and displaying symbols that promote hatred and violence. Among the symbols that would be banned are Swastikas and other Nazi emblems, Klu Klux Klan symbols and Confederate flags. Bill C-229 is a tool designed to address the growing violence and hatred in Canadian communities.

“Everyone has the right to feel welcomed, secure and respected in their community. Allowing these symbols of hatred to be sold in stores or publicly displayed is retraumatizing for people who have been, and continue to be, targets of violence and oppression,” said Julian. “Symbols that have been used to incite violence against people have no place in our society. I hope the federal government will support this bill and work with us to ensure symbols of hate aren’t normalized or tolerated in any way and to make our communities better for everyone.”

Heather McPherson, MP for Edmonton Strathcona seconded the Bill. She said, “Overt hate, racism, and antisemitism has become a feature of recent protests in Ottawa and elsewhere. Jewish people in particular have been targeted by this group through the distribution of yellow stars and the display of swastikas and other hateful imagery. I condemn hate in all forms and I will continue to work in Parliament to counter hate. New Democrats have called for white supremacist and neo-Nazi organizations to be added to the terrorist list and my colleague, Peter Julian, has tabled Bill C-229 – An Act to amend the Criminal Code (banning symbols of hate). I was honoured to second this bill as an important step to countering hate, but there is much more work to be done including ending the online radicalization of Canadians.

“It’s time to stand up for the rest of Canada. It’s time to laud the Canadians who are doing the right thing, our healthcare workers and everyone else who is caring for one another. And it’s time to condemn the racists and extremists who threaten our values and our democracy and arrest those who are breaking the law.”

During this week’s protest in Ottawa, Canadians witnessed vile and hateful displays of Nazi swastikas and the flying of Confederate flags at the very centre of Canadian democracy. But, long before the protest, the COVID-19 pandemic revealed deep socio-economic inequalities experienced by the most vulnerable populations in Canada. Islamophobia, anti-Semitism, racism, homophobia, transphobia and misogyny continue to be a problem in our society. Hateful and violent crimes against Indigenous people, Black, Asian and other racially marginalized communities rose and the number of hate groups in Canada increased during the pandemic. Yet, symbols of hate are freely displayed and sold across our country.

“Canadians are tired of symbolic gestures. The time for rhetoric is over: the government needs to act. Banning symbols of hatred like swastikas or Klu Klux Klan insignia is more important now than ever for all Canadians to feel safe,” said Julian. “It is up to all of us to stop the spread of hate in our communities. And this bill is a step in the right direction.”