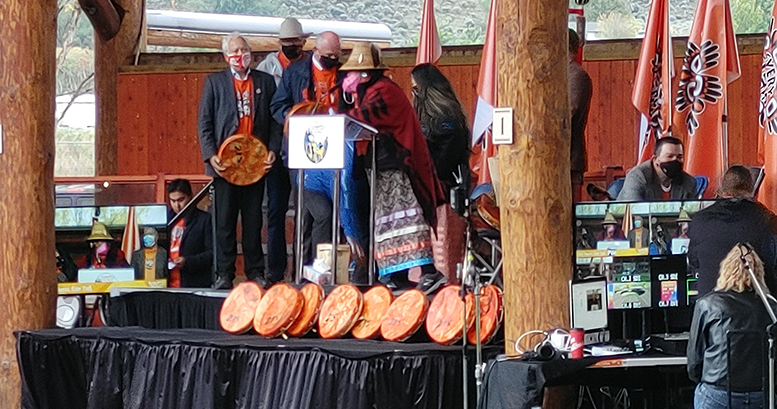 National Truth and Reconciliation Day in Kamloops BC.

(ANNews) – As the rain fell on a somber and chilly morning, the Tk’emlúps te Secwe̓pemc welcomed Canada, and the world, back to their territory. Traditional song and jingle dancers welcomed the orange clad crowd to the inaugural National Day for Truth and Reconciliation. A fitting continuance of the journey started in May 2021 when the world learned of the remains of 215 children lost to the Kamloops Indian Residential School.

This announcement, which was part of a slow progression of over two decades, would serve to awaken Canada to the truths Indigenous people had always known. As Kúkpi7 Rosanne Casimir told the crowd, “Non-Indigenous people are actually listening… and it is the [lost] children that will bring us through this.” Kúkpi7 Casimir was the first of a number of speakers that took time to reflect on the day’s meaning.

Video presentations, with song and discussion serving as interludes, helped to fill a packed agenda for this day formerly referred to as Orange Shirt Day. Assembly of First Nations (AFN) National Chief RoseAnne Archibald shared a personal story regarding her own sister, Euphamie, who was a victim of the notoriously brutal St. Anne’s Indian Residential School. A truth that was lost to the National Chief during the early years of her life, a story that hits home for many Indigenous people.

Chief Archibald continued, “100% of Indigenous people in Canada are survivors of intergenerational trauma…It is the First Nations survivors that should take the lead on healing through a trauma informed approach.”

She called on the federal government, and allies, to ensure that every dollar pledged be spent on healing from these traumas.

Speaker after speaker shared difficult truths and connections to the horrors of a system designed to “kill the Indian in the child.” But with each truth, came the hope and dedication to making sure these atrocities never happen again. AFN Regional Chief Terry Teegee reminded the attendees of the “…culpability on behalf of the government, parish and RCMP,” and the need for all parties to take tangible actions moving forward.

Included in the other delegates invited were Kamloops Mayor Ken Christian, Minister of Indigenous Relations and Reconciliation Murray Rankin and Solicitor General Mike Farnworth. Mayor Christian announced the City of Kamloops would be installing banners designed by Tk’emlúps te Secwe̓pemc members celebrating the areas’ shared heritage as well as his intention to sign a protocol agreement later in the Fall.

Noticeably missing, from an event held at the epicentre of Residential School truth telling, was any representative from the Federal Government. Those in attendance, who braved the cold morning, were informed that Prime Minister Justin Trudeau had been invited, and should have attended. These declined invitations were made all the more relevant when it was learned that the Prime Minister was in the province, but vacationing in Tofino, BC.

The day’s events closed with a moment of silence at 2:14 pm and a drum song at 2:15 pm. A time chosen to reflect the 215 children found. A discovery that has not only shaken Canada to its core, but helped remind Indigenous people of how much they have had to endure. With the nation once again focused on Tk’emlúps te Secwe̓pemc, Indigenous people ask Canadians, will we have to endure much more?