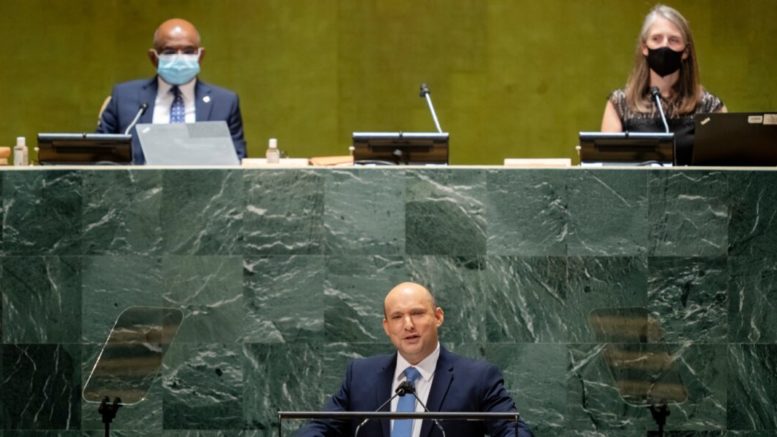 (JTA) – Israeli Prime Minister Naftali Bennett won’t run in his country’s upcoming elections this fall, his office announced Wednesday, after he served as head of a fragile, now collapsing Knesset coalition for a little over a year.

The announcement caught many in Israel by surprise given that Bennett had led the country for just a year and, as the leader of the right-wing  Yamina party might well have won a role in any future government coalition. He indicated in his final speech to the Knesset that he would continue to support Yair Lapid, his foreign minister who is set to assume the prime ministership on an interim basis this week.

“I don’t intend to compete in the coming elections, but I will remain a loyal soldier in the service of this country,” Bennett said.

Bennett will continue to serve as alternate prime minister under Lapid’s caretaker government, which will begin as soon as the Knesset holds its formal vote to dissolve the government and end when a new coalition forms after the next elections in October or November. These will be Israel’s fifth elections in just over three years, further exacerbating the country’s ongoing political stalemate and providing ousted Prime Minister Benjamin Netanyahu with an opportunity to retake power even as he continues to face corruption charges.

Bennett’s coalition, which held only a one-seat majority in the Knesset, ended after two defections, and political observers speculate that Netanyahu’s behind-the-scenes gamesmanship is to blame.

Bennett had previously hinted his interest in leaving politics following the coalition’s collapse. He also named a rising right-wing political star, Interior Minister Ayelet Shaked, as the new head of Yamina. Polls indicate Netanyahu would have to win Yamina back to his side in order to retake the Knesset.

As Lapid and other Israeli politicians thanked Bennett for his service, the country’s first new head of state in 15 years leaves behind a mixed legacy. He made repairing relationships with American Democrats a top priority of his after more than a decade of Netanyahu’s cozying up to the Republican Party and became the first Israeli prime minister to visit the United Arab Emirates and Bahrain in the wake of the Abraham Accords brokered under Netanyahu.

But Bennett showed little interest in reopening talks with the Palestinian Authority, saying that Israel wasn’t focused on them. He has also resisted outside calls (including from the American Democrats he sought to reconcile with) to open a criminal investigation into the shooting death of a well-known Palestinian-American journalist. Outside observers have said Shireen Abu Akleh was likely killed by the Israeli military, although Israel has called on the Palestinian Authority to release the bullet that killed her.

Though Bennett built his political name on his support of religious settlers, his government collapsed when the Knesset failed to extend a law granting full Israeli legal rights to settlers in the occupied West Bank.