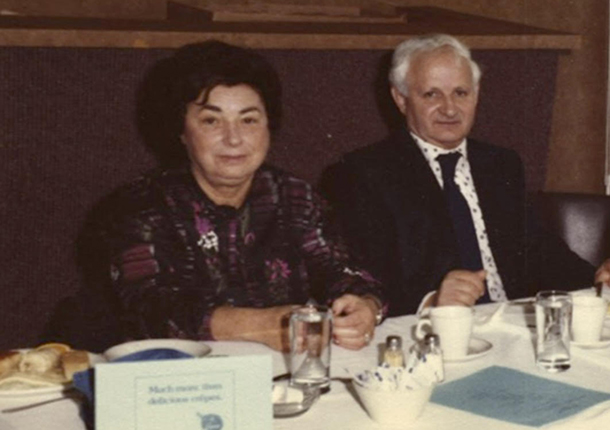 (AJNews) – Anna Shapiro z”l, a lifetime member of Na’amat Canada, passed away peacefully on September 5, 2021 at the age of 98.

She was educated as a pharmacist in Russia and met her husband to be Max in a hospital ward where he had been sent as a wounded soldier. He was being neglected and when Anna realized he was Jewish, she nursed him back to health.

They emigrated to Edmonton from Russia/Ukraine via Israel.

She joined the Kanot Chapter in 1953 understanding that Pioneer Women (as it was then called) was a part of the U.S. organization. Anna was fortunate to meet Thelma Rolingher, who was on the National Board at the time, and who encouraged her to join and become an active member. Anna was fluent in Yiddish, had very little English, and didn’t feel too confident about taking on the Kanot Presidency, but everything turned out fine when she found everyone else in the group spoke Yiddish. Kanot became known as the only group in Edmonton who spoke Yiddish at their meetings. They eventually graduated to having their meetings in English.

Anna’s business experience enabled her to be an effective leader and she was highly respected by our membership.

She held many Edmonton Council Executive positions graduating to President where she attended National Board meetings representing Edmonton. She served four years in that capacity.

In 1984 she Co-Chaired Na’amat National Convention hosted by Edmonton and she was terrific in that role.

Anna’s name will be inscribed with other generous Na’amat donors on the toy chest wall at the Karmiel Day Care Centre.