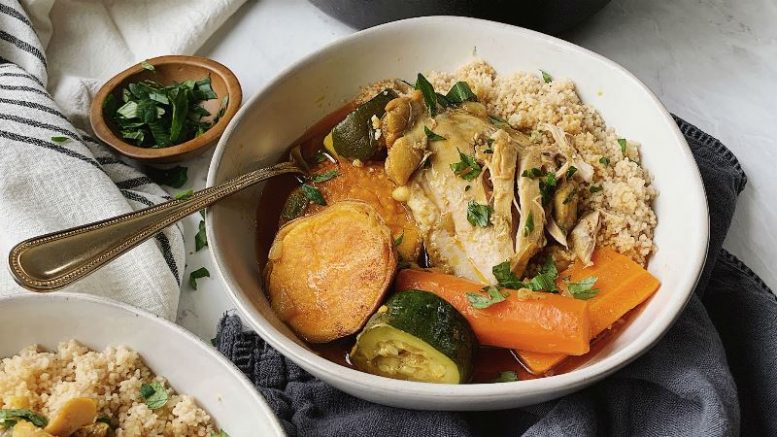 This article originally appeared on The Nosher.

I always considered couscous to be just a simple side dish until I met a dear friend whose Israeli-Yemenite-Moroccan family introduced me to couscous in all its glory: a big, hearty, super comforting main dish. I quickly understood that couscous has a rich place in the North African kitchen and is so much more than just tiny pasta you buy from a box at the supermarket.

What makes this couscous dish perfect for weeknights is that all the ingredients come together in one pot, which means there’s a lot less cleanup. By taking a few short cuts, we can make a big pot of this couscous in under an hour, with plenty of leftovers to take for lunch the next day — the flavors will be even better!

Directions:
1. Heat a large heavy-bottomed pot over medium heat. Season the chicken lightly with salt and pepper on both sides. Add olive oil to the pot.

2. Carefully place the chicken in the pot in a single layer, and cook for 3-4 minutes per side until chicken has become golden and fragrant. Remove the chicken from the pot and set aside on a large plate.

3. Add the onion and garlic to the pot, cooking in the rendered chicken fat. Scrape up all the brown bits from the bottom of the pot. Cook for 2-3 minutes until the onion is soft. Add the turmeric, cinnamon, paprika and cumin to the pot. By adding the spices now, you are basically toasting them in the hot oil. This releases their aromas and flavors more intensely than if you added them to the simmering liquid.

4. Return the chicken to the pot, along with all of the largely cut veggies and the chicken broth.

5. Bring the stew to a simmer, then place the lid on top (ajar) and continue to cook for about 35 minutes. Add additional salt to taste.

6. Meanwhile, make the couscous according to the package directions, and set aside until the stew is ready, when the sweet potatoes are fork tender and the chicken is very soft.

7. Serve in large shallow bowls, with plenty of broth. Sprinkle the chopped parsley on top. Serves 6.

Be the first to comment on "Moroccan Couscous and Chicken: A hearty dinner easy enough for busy weeknights"