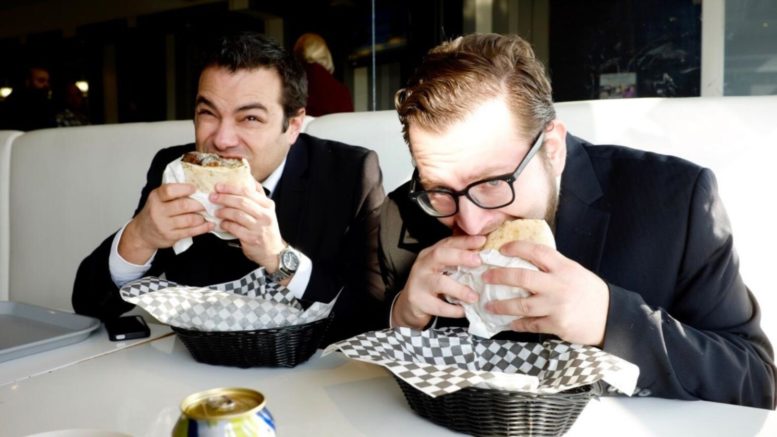 “Let’s really figure out what the foods of Montreal have to do with the whole story of Jewish history,” said Elman of their goals in making the film. “And how it’s become so important to the Jews of Montreal. In particular, us.”

Food has proven to be a focus for fodder throughout the series. Whether it’s a bagel or a babka, the two countdown in unison, “eyns, tsvey, drey, NOSH,” before sinking their teeth in. Fans of the show took notice of all the delis and bakeries popping up on the show and even started visiting Montreal themselves for a makeshift “YidLife Crisis” food tour.

“I was sitting outside one of the restaurants that we eat at in our series –– Lester’s Deli in Mile End in Montreal,” said Elman. “This van pulled up of people with Texas plates on the car, and I mentioned ‘YidLife Crisis’ to my parents who I was sitting with. [The Texans] heard me say it and said, ‘Oh, are you doing the ‘YidLife Crisis’ Food Tour?’”

Elman was caught off guard by the question. “It sounds delicious,” he said, before adding, “I am the ‘YidLife Crisis’ tour.”

The Texans rattled off familiar “YidLife” stomping grounds they’d just visited. That’s when it became clear that Elman and Batalion needed to give Montreal “the proper treatment” after years of scratching the surface with food jokes on the web series.

“It was time for us to give [Montreal’s Jewish food scene] a more historical context,” said Elman. “The documentary allows us to go talk to real experts on the history and food of Jews in Montreal and Quebec.”

In a way, the film also brings a lifetime of Jewish eating full circle for Elman and Batalion. The smoked meat made a certain way for over a century, Cheskie’s babka, and the wood-fired baked Montreal bagels were fixtures of their lives growing up in Montreal.

“We grew up eating these things every day,” said Elman. “We did not think about them as being necessarily Jewish foods. They were just Montreal foods.”

Soon after they started uploading episodes of “YidLife Crisis,” Batalion and Elman found themselves scoring invites across North America, Europe and Israel to perform and share their work with different Jewish communities. These experiences were invariably filmed as well under the banner of “Global Shtetl.” These travels meant eating Jewish foods from around the world, which gave the duo a new perspective on Montreal’s food scene.

Batalion estimated that filming the entire project was completed within a 24-hour period. “What you see is what you get,” he said, referring to some of the scenes in the film, like the walking history tour with Zev Moses from the Museum of Jewish Montreal, the Sephardic dinner party, and stops at different classic delis and bakeries throughout the day.

Viewers leave with a greater sense of Montreal Jewish history, the role food played in the community, and where things are heading with glimpses at organizations like Kat Romanow’s The Wandering Chew featured at the end of the film. The Wandering Chew launched in 2013 to both preserve and revitalize Jewish food traditions and continues with events and cooking workshops. Batalion also pointed to Arthurs in Montreal’s Saint-Henri neighborhood as an example of where Montreal Jewish cuisine is heading. “They’re very much like the nouveau shtetl,” he said. “They have a little bit of fusion with the Sephardic influence.”

After traveling to New York City for the film’s New York-premiere at the YIVO Institute for Jewish Research, the film became available on DVD, on their website for a small donation to their work, and on the Jewish streaming service ChaiFlicks. Now Batalion and Elman are focused on their next project: making the Jewish comedy and culture of “YidLife Crisis” more accessible to the rest of the world through translation. “Chewdaism” will make its French premiere in downtown Montreal in association with the Les Rendez-vous Québec Cinéma film festival, and they’re translating episodes of the web series into Arabic and Russian.

Of course if you’re hungry for more “Chewdaism,” fans might have the opportunity to eat their way through the film in the near future. Batalion and Elman are exploring the possibility of turning the film into an official food tour.

“It’s something we’re looking to get into and have some small ‘bites,’ if you will,’ on that front already,” said Batalion. “[The film] has taken us in all sorts of interesting directions with interesting responses from an audience we didn’t necessarily anticipate.”