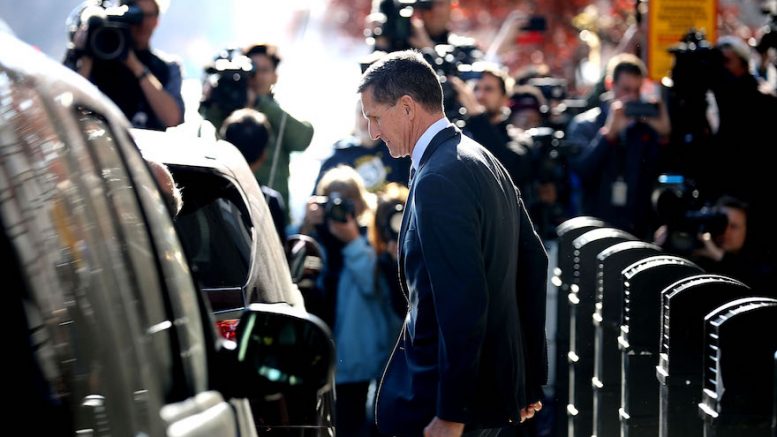 That last word is key: Flynn twice talked to Kislyak in December 2016 when Trump was president-elect, not president. That was still Barack Obama’s job.

One of the things Flynn and Kislyak talked about was Israel. Flynn says that was at the behest of Trump’s son-in-law and adviser Jared Kushner, who has longstanding ties with Israeli Prime Minister Benjamin Netanyahu.

What does that mean for special prosecutor Robert Mueller’s investigation of ties between the Trump campaign and transition team and Russia? What are the implications for Kushner and for Israel?

Why does the timing matter?

The 1799 Logan Act calls for the prosecution of any U.S. person who “directly or indirectly commences or carries on any correspondence or intercourse with any foreign government or any officer or agent thereof, in relation to any disputes or controversies with the United States, or to defeat the measures of the United States.”

Neither Flynn nor Trump were yet in government.

What did Flynn do?

According to court papers released Friday, Flynn on Dec. 29 asked Kislyak for assurances that Russia would not retaliate against the United States for sanctions Obama had just imposed for Russia’s alleged interference in the 2016 U.S. election. On Dec. 22 he asked Kislyak to keep a U.N. Security Council resolution condemning Israel’s settlement policy from advancing. He lied about those conversations in a Jan. 24 interview with FBI agents.

The Obama administration was signaling that it would allow through the Security Council resolution — a move that would enrage Israel and its American supporters. It did and Russia did not intervene, in fact voting for the resolution. (Russia did heed the Trump team’s request not to impose sanctions, however.)

Flynn’s actions could suggest that he carried on “intercourse … in relation to “another country’s controversies with the United States, as it’s defined in the Logan Act. In the case of the Obama administration’s decision to allow the U.N. Security Council resolution to advance, his action, had it been successful, would have “defeated” a U.S. measure.

So this is about the Logan Act?

Maybe not. There has not been a successful prosecution under the act since 1799; there seems to have been only two indictments.

One concern is the law’s First Amendment implications. The Logan Act, were it ever to be applied broadly, would inhibit political speech. And a president-elect launching his foreign policy during a transition is not unprecedented. President-elect Dwight Eisenhower visited South Korea in November 1952 to lay the ground for his plan to end the war. During the 1968 transition Richard Nixon, through a top adviser, Henry Kissinger, secretly reached out to North Vietnam in a bid to restart peace talks.

So if it’s not about the Logan Act, what is it about?

Maybe it is about the Logan Act. Although the act seems unprosecutable, the threat of its invocation almost since its inception has been a potent political cudgel. Even absent a prosecution, the notion that a political rival is actively undermining U.S. policy, and particularly with an adversary of the United States, can damage a reputation. Flynn may have lied to the FBI on Jan. 24 not because he feared prosecution, but because he feared for the credibility of the 4-day-old presidency he was serving.

Vice President Dick Cheney intimated that Nancy Pelosi, then the speaker of the U.S. House of Representatives, was in violation of the act in 2007 when she met with Syrian President Bashar Assad. Pelosi vigorously denied Cheney’s charges that she was undercutting the Bush administration’s isolation of Syria. She said the meeting was at Israel’s behest, a bid by then-Prime Minister Ehud Olmert to tamp down tensions.

Carter administration officials have said Ronald Reagan’s campaign persuaded Iran to delay the release of Iranian hostages until after the 1980 election to wound incumbent President Jimmy Carter — a charge that Reagan’s aides hotly denied. Reagan in 1984 accused then presidential candidate Jesse Jackson of violating the Logan Act when he visited Syria and returned with an American airman who had been captured.

Lyndon Johnson considered invoking the Logan Act just before the 1968 election when he learned that Nixon was secretly working with the South Vietnamese to scuttle peace talks in order not to give the Democratic candidate, Johnson’s vice president, Hubert Humphrey, a pre-election boost. (Saigon wanted Nixon to win.) Johnson in the end kept Nixon’s secret.

So it’s the cover-up, not the crime?

Perhaps. If Mueller establishes that the Trump transition team was intent on undercutting steps Obama had taken to protect American interests, the lying would become more consequential, even if the underlying act is not illegal.

So isn’t it a wrap? Mueller’s got Flynn’s guilty plea, right?

Mueller has other game in mind, and Flynn apparently is cooperating. In his plea, Flynn said “a very senior member of the presidential transition team directed Flynn to contact officials from foreign governments, including Russia, to learn where each government stood on the [U.N. Security Council] resolution and to influence those governments to delay the vote and defeat the resolution.” That “very senior member,” Bloomberg News reported over the weekend — and other media have confirmed — is Kushner. (Flynn’s subsequent appeal to Russia not to retaliate for Obama’s sanctions was reportedly at the behest of another transition official, K.T. McFarland.)

So that’s Kushner’s role. What about Israel?

On the same day that Flynn was asking Kislyak to stop the resolution, Dec. 22, 2016, Trump put out a statement saying the Security Council resolution “should be defeated.” Israeli officials at the time said they had asked Trump to make the statement.

“We did reach out to the president-elect and are deeply appreciative that he weighed in, which was not a simple thing to do,” one told CNN.

All of this was aboveboard — Trump’s transition team at the time said it had notified the Obama White House that Trump would make the statement, and the Israeli official told CNN it had warned the Obama team that it was turning to Trump for help. Mueller will want to know if Kushner, who pressed Flynn to make the call to the Russians, was taking directions from Israel.

But all this is taking place in the open. Why did Flynn lie about it a month later?

A statement from Trump is a wish and not much more. If Flynn, in his conversation with Kislyak, offered a quid pro quo, and with Kushner’s blessing, it could be seen as a deal — an active effort to undermine Obama administration policy.

Is Kushner in trouble?

What that deal would involve would deeply interest Mueller, partly if it involves benefits that would not merely accrue to Trump’s presidency, but to Kushner’s personal fortune.

Writing for Bloomberg News, Timothy O’Brien, a Trump biographer, said Kushner’s interests with Russia and Israel may extend well beyond his father-in-law’s foreign policy considerations. Kushner’s family is in debt because of its ownership of a Manhattan office tower, and Mueller is intrigued about a meeting Kushner took with a banker during the transition. (Kushner has said he met with the banker because of his close ties to Russian President Vladimir Putin, and for no other reason.) In his real estate dealings, Kushner has also partnered with one of Israel’s wealthiest families.

There’s more: Kushner reportedly pressed his father-in-law to sack then-FBI Director James Comey in May. Comey was investigating the very events that have entangled Flynn — and, we now know, Kushner. Kushner also has spoken to congressional committees and with Mueller’s investigators. Whether Flynn’s revelations of the conversations with Kislyak came up — and whether Kushner was truthful about what he knew — we don’t know.

So we’re back to the Logan Act. Have the Democrats noticed?

“This shows a Trump associate negotiating with the Russians against U.S. policy and interests before Donald Trump took office, and after it was announced that Russia had interfered in our election,” Bloomberg quoted Sen. Dianne Feinstein, D-Calif., as saying. “That’s a stunning revelation and could be a violation of the Logan Act, which forbids unauthorized U.S. citizens from negotiating with a foreign power.”