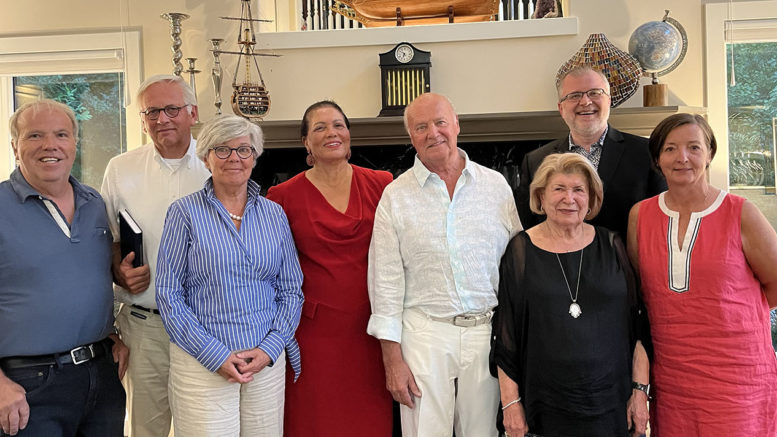 (AJNews) – The Jewish community can take much comfort in knowing that we have some formidable non-Jewish friends and allies. Two spoke at a private gathering at the Calgary home of Helmi and Ron Switzer on Sunday, August 14. One of them, prominent Calgary businessman Alfred Balm, lives right across the street with his wife Phyllis in one of Calgary’s most remarkable – and remarked upon – homes. The other, Jan-Willem van Lieshout, hails from Amersfoort, Netherlands where he has made it his mission to memorialize the Jews and Dutch Partisans murdered by the Nazis during World War II. In a riveting talk, van Lieshout, accompanied by his wife Jannèt, spoke about the history of the Dutch Jewish community, the Second World War, and his volunteer work on behalf of the Memorial Stones Foundation of Amersfoort.

In 1992, German artist Gunter Demnig launched a remembrance project that quickly spread through Germany and a host of other European nations. The concept was the creation of Stolpersteine – stumbling stones – that would be set in the public spaces adjacent to the last homes of Jews who were later dispossessed, perishing at the hands of the Nazis and their collaborators. Each stone includes the name, date of birth and fate of one of the 6,000,000 Jews murdered during the Shoah. Some 70,000 of the handmade stones have since appeared throughout many European countries.

While the Foundation in Amersfoort – formerly chaired by van Lieshout – wished to memorialize the murdered in a similar way, they chose to do so independently so that the posthumous honour could also be extended to non-Jewish resistance members. On van Lieshout’s watch, 430 stones were set in Amersfoort – 370 of them honouring the memories of Jews and 60 devoted to the memory of non-Jews who refused to be bystanders.

Van Lieshout – who made his living in commercial real estate – is proud that the efforts of the Memorial Stones Foundation of Amersfoort are volunteer driven and not for profit. Of course, that means that fundraising is necessary. That’s where Alfred Balm entered the picture.

Balm, the founder and former chair of the multinational company Emergo Group, experienced adversity as a young child. During World War II, he and his family, who lived in Amersfoort, suffered numerous privations including starvation. They were liberated by Canadian soldiers, specifically members of the Calgary Highlander Regiment.

According to the Calgary Herald (May 2, 2020) Balm never forgot the sacrifices of his liberators, generously extending financial support to surviving veterans, among other worthwhile causes. At the Switzer gathering, Balm recalled that while he was attending an event at the Military Museums of Calgary, he learned of the memorial project in Amersfoort. He contacted van Lieshout to offer his and his wife Phyllis’s support, eventually providing 75 percent of the initial costs to produce the memorial stones.

It is Balm’s intention to promote the project elsewhere in the Netherlands where van Lieshout says some 80 towns, cities and villages have already launched memorial stone projects.

“Initiatives like this need to be repeated. Where we can assist in this effort we certainly will,” Balm said.

Van Lieshout’s talk included a brief re-enactment of a typical memorial stone ceremony. Each stone is covered by sand which is then swept away to reveal the name and the details carved in the granite block. A flower and small stone (in the Jewish tradition) are set on the memorial and Kaddish is recited, though gathering a minyan in the dwindling Jewish community of Amersfoort is a challenge.

Good prevails in the Dutch city (pop. 160,000)  where the mayor, the Rabbi and Memorial Stone Foundation volunteers come together to honour the dead in a place whose citizens once lived in the grim shadow of the concentration camp sharing Amersfoort’s name. There, some 37,000 people were held between 1941 and 1945, with most subsequently transported to death camps in Poland, including Auschwitz and Sobibor.

Volunteers like Jan-Willem van Lieshout continue to share the stories of those named on the Stolpersteine, often speaking at schools and other community-based organizations.

“Let’s not forget their names,” said Alfred Balm, who is pleased that this project “goes further,” delving into the lives and legacies of those who cannot speak for themselves and emphasizing their contributions to society and – poignantly – the incalculable human potential obliterated by hate during World War II.

Why does Van Lieshout do what he does?

“My wife will confirm this,” he says. “I cannot accept injustice.”

Be the first to comment on "Memorial Stones Foundation of Amersfoort: Honouring forgotten heroes"