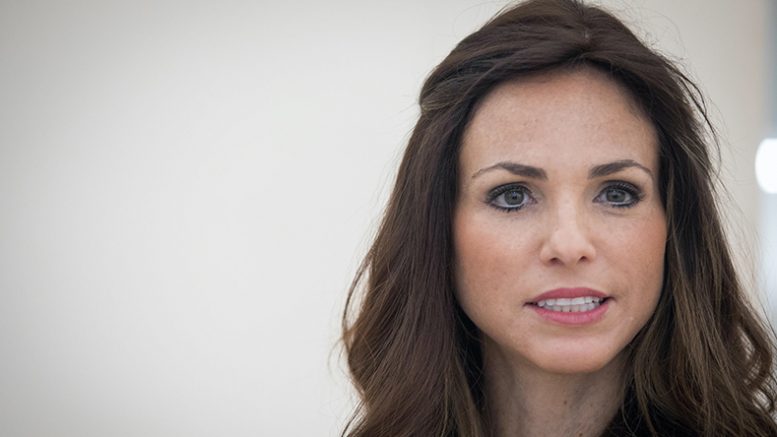 It has never been an easy task, but tensions in recent years between Israel and the United States, as well as other international Jewish communities, have boiled to all-time highs over several high-profile social, political and religious disagreements. Among them: who can pray at the Western Wall and who Israel’s Orthodox Chief Rabbinate deems Jewish. The majority of an American Jewish community that in the main is liberal feels alienated by Israel’s right-wing government and its hawkish policies.

Yankelevich’s role is complicated by the fact that she is haredi Orthodox — part of a community that is at the heart of some of the issues putting a wedge between Israel and the Diaspora. She’s also the first haredi woman to hold a Cabinet position in Israeli government and is taking criticism for that – many in her community say her participation in politics is scandalous.

Many eyes are focused on the political newcomer. Will she work to bridge the divides that have widened between Israel and international Jews? Will she compromise with the religious community in Israel to which she belongs?

What the Diaspora minister does

The Ministry of Diaspora Affairs has traditionally been one of the smaller and least-funded government agencies in Israel, and until 2015 it did not stand on its own. Its minister typically took on a second, more prominent portfolio. Just as the Foreign Ministry handles dealings with foreign nations, the Diaspora minister is the official in charge of taking the point on relations with Jewish communities abroad.

Under the last minister, Naftali Bennett, who ran the Diaspora Ministry while also serving as education minister, the ministry attempted to radically expand its operations, touting a plan under which it would pour billions of dollars into Diaspora communities in an initiative to strengthen Jewish identity. However, due to infighting among the ministry, the Jewish Agency and the Prime Minister’s Office, the project never launched.

Why the Israel-Diaspora bonds are strained

One of the major flashpoints between Israel and organized American Jewry is the Western Wall, or Kotel, as it is known in Hebrew. The holy site is overseen by a government body known as the Western Wall Heritage Foundation, which runs it according to an Orthodox interpretation of Jewish law. There are separate women and men’s sections, but no equitable space for non-Orthodox prayer.

A compromise deal brokered by former Jewish Agency chair Natan Sharansky was widely seen as a way out of the impasse over the site, but in 2017, Prime Minister Benjamin Netanyahu suspended the deal, leaving American Jewish leaders feeling betrayed.

Authentic Jewish identity is another major point of tension. In recent years, Israel’s Orthodox Chief Rabbinate has come under fire for allegedly “blacklisting” American Orthodox rabbis that it does not trust to recognize the Jewish identity of American immigrants to Israel.

Last year it emerged that the Chief Rabbinate was asking some Russian-speaking immigrants to take DNA tests to prove their Jewish heritage. Last week, Israeli media reported that the interior ministry retroactively revoked the Jewish status of 2,200 children.

Meanwhile, some European Jews have expressed regret at Israel’s efforts to bolster ties with former Soviet states, with communal figures in countries such as Ukraine and Hungary complaining that Jerusalem has ignored anti-Semitism and Holocaust revisionism in its quest for closer diplomatic relations.

Not your typical Orthodox lawmaker

Despite being haredi Orthodox, Yankelevich isn’t a member of a religious party. In fact, she’s in Benny Gantz’s Blue and White centrist coalition, which does not cater to the religious community the way Netanyahu’s Likud party has. In March, the party pledged to push for haredi enlistment in the military and enforce the teaching of a core curriculum in haredi schools — both of which are strongly opposed by the haredi political establishment.

Yankelevich, 42, was elected to parliament last year in her first foray into politics. The Tel Aviv native, born to secular immigrants from the Soviet Union who had embraced religion later in life, grew up with one foot in the insular haredi community and another in the secular world. (Her father, for example, was an actor for the famed Israeli Habima Theater.)

Her early formative experiences included traveling to Russia with her parents toward the end of the Soviet Union, where they spent several years volunteering in local Jewish communities. By the time she was 16, Yankelevich was teaching Hebrew and Jewish practice in Moscow.

She attended haredi schools in Israel and the United Kingdom, including the well-known Gateshead seminary, before earning a bachelor’s degree in education from Cambridge University and a master’s in law at Bar-Ilan University in Israel.

Yankelevich went on to spend several years working as a government attorney before establishing the Just Begun Foundation in 2015, a nongovernmental organization dedicated to “promoting social resilience and reducing gaps in society.”

She now lives in the Jerusalem suburb of Ramat Beit Shemesh with her husband and five children.

It’s too early to tell how exactly Yankelevich could enact change in the ministry, but there have been some clues to analyze.

Since entering office, Yankelevich has issued calls for greater unity between Israel and the Diaspora, and pledged to offer aid to Jewish communities disproportionately hit by the COVID-19 pandemic. According to The Jerusalem Post, in late May she offered her “unconditional commitment” during a Zoom conference with Jewish Agency officials, describing the “need to work together in mutual respect and understanding for the good of our Jewish world.”

National Jewish organizations have been particularly badly hit, and one American Reform leader has mulled the merging his and other denominations. The Jewish Federations of North America, the umbrella group is leading an emergency coalition to coordinate the Jewish response to the pandemic, and has laid off some of its own staff. (In late April, the Jewish Agency, in collaboration with Jewish Federations and Keren Hayesod, or United Israel Appeal, started a $10 million COVID-19 Loan Fund for Communities in Crisis. It is currently unclear what the Diaspora Ministry would add to this.)

In an op-ed published in The Jerusalem Post, Yankelevich said that she and her team were “working in full cooperation with other bodies to create a program of worldwide solidarity that will serve to strengthen the sense of mutual Jewish cohesion, a step on the way to our goal of creating an active, strong and significant world Jewish solidarity,” but offered little practical detail.

“While here in Israel we are also experiencing a difficult period and a tough economic situation, this is an opportunity for us to prove our unconditional love. … We are also preparing an active assistance program to help communities and institutions,” she wrote.

Her time abroad and the fact that she lives in the heavily American neighborhood of Beit Shemesh could mean that she has a greater understanding of Diaspora Jewry than other Israelis without her background and experiences.

“I have always felt a strong link to our commitment to the Jewish Diaspora. It began when I was still a child, when my parents took the step of working as emissaries to the Jewish communities of what was then the Soviet Union,” she wrote in The Jerusalem Post op-ed. “During this period we met Jews, many of whom were outwardly different from us but were in fact very similar in so many ways. These encounters instilled in me, even then, a personal commitment to become acquainted with and to cherish the Jewish world outside of Israel.”

Zvika Klein, an Israeli journalist who covers the Diaspora for the Israeli newspaper Makor Rishon, said that “the fact that she is in a nonreligious party pretty much says it all.”

Blue and White “is a party that says it will promote the Kotel deal and on issues of religion and state is pretty progressive, so it [indicates that] she’s not a typical haredi,” he said.

The Just Begun Foundation is focused on broader Orthodox cultural integration. One of its projects is Art and Emuna (Hebrew for belief), an initiative to promote the work of haredi artists and help integrate them into Israel’s cultural scene, as well as exposing the secular art world to art with Jewish content and themes, “thus leading to a significant change in consciousness in Israeli society.”

What Diaspora leaders are saying

“It’s important that women from a diverse array of backgrounds are taking up the mantel of leadership,” said Sheila Katz, CEO of the National Council of Jewish Women. Katz said she looked forward to working with Yankelevich.

Polish Chief Rabbi Michael Schudrich agreed, telling the Jewish Telegraphic Agency that it was an “important step to have a female haredi minister.”

“A Cabinet should represent the people of the nation, and the appointment of Omer Yankelevich certainly helps that goal,” he said. “Let’s give Minister Yankelevich a chance to see what she will do. It is wrong to prejudge her.”

“We hope that it is precisely the fact that the MK Yankelevich is part of the ultra-Orthodox society in Israel which will help to reduce the concern of more traditional Israeli public with full recognition of the Reform and Conservative streams,” said Rabbi Rick Jacobs, president of the Union for Reform Judaism.

“We are confident that it will be a personal example of the ability to work together despite differences and disagreements,” he continued, stating that she had “the potential to be a bridge of understanding between Israel’s Orthodox and ultra-Orthodox communities and the largely non-Orthodox Diaspora communities.”

Noting Yankelevich’s efforts to “achieve greater integration of marginalized sectors of Israeli society,” Alex Ryvchin, co-CEO of the Executive Council of Australian Jewry, said that her “emphasis on inclusion, outreach and unity should serve her well in her new role” and that he looked forward to connecting with her.

William Daroff, CEO of the Conference of Presidents of Major American Jewish Organizations, said that he had previously spoken with Yankelevich and found her “engaging and [a person who] can be worked with.”

“She was interested in listening and hearing about the concerns of the North American Jewish community and engaging with us in those conversations, and that is precisely, I think, the best attitude to take, which is to be in a position of listening to the Diaspora across the board and hearing our concerns and our thoughts about the relationship between the state of Israel and Diaspora communities,” he said.

Eric Fingerhut, president and CEO of The Jewish Federations of North America, sounded a similar note, saying that he welcomed her appointment and that she had “already made clear her commitment to Jewish unity.”

What haredi Orthodox leaders are saying

Yankelevich has been harshly criticized by haredi politicians and media.

Last June, several months after her entrance into Israeli politics, parliament member Moshe Gafni, whose United Torah Judaism party does not allow female candidates, censured a seminary in the haredi city of Bnei Brak for allowing then-candidate Yankelevich to visit.

“I was shocked to hear that a Knesset member of a secular party whose goal is to harm all that is holy and precious to the people of Israel visited and was received with great respect by the management of the seminar,” Gafni wrote, calling her visit  “a contemptuous and shameful thing,” according to a copy of the letter published by The Jewish Press.

More recently, Rabbi Dov Halbertal, former head of the Office of the Chief Rabbi, went on the radio (in Hebrew) to accuse Yankelevich of having “sacrificed her body for politics” and undermining the family dynamics that sustain the Orthodox community.

Samuel Heilman, a sociology professor at Queens College who studies the Orthodox community, said this of Yankelevich: “If anything, she threatens the haredi world because she presents an alternate model of what one can be and still be labeled haredi in the media.”

Be the first to comment on "Meet Omer Yankelevich, the Orthodox woman tasked with mending the frayed ties between Israel and the Diaspora"