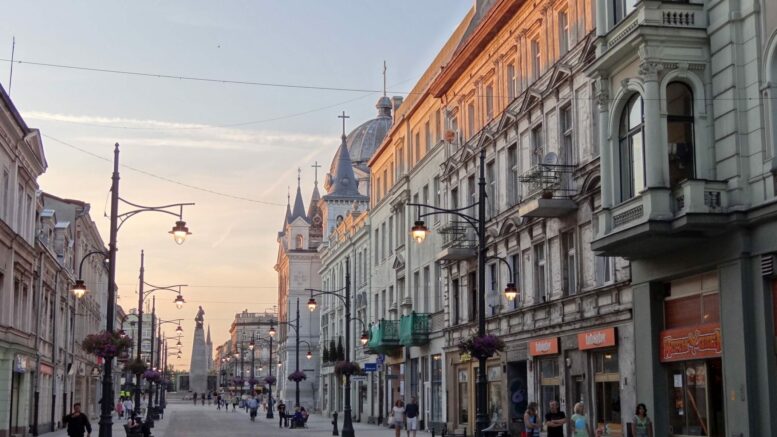 Piotrkowska Street In lodz, Poland, not far from the street where the Jewish artifacts were found. (Adam Jones/Wikimedia Commons)

by David I. Klein

(JTA) — Construction workers renovating an old tenement house in Lodz, Poland, unearthed a surprising find: an untouched cache of hundreds of Jewish artifacts believed to have been hidden in advance of the Nazi occupation of the city.

The trove — which included menorahs, kiddush and ritual washing cups and items from everyday life, all wrapped carefully in newspaper — was buried next to a building just beyond the ghetto in which Lodz’s Jews were imprisoned during the Holocaust. Only about 10,000 Lodz Jews survived until the end of the war, out of a prewar population of about 230,000.

“A find like this comes along once in a decade,” Adam Pustelnik, the vice mayor of Lodz, said in a tweet.

“The discovery is remarkable, especially the quantity. These are extremely valuable, historic items that testify to the history of the inhabitants of this building,” said Agnieszka Kowalewska-Wójcik, director of the Board of Municipal Investments in Łódź, according to Polish media.  She said the artifacts are being transferred to the city’s archaeological museum, adding, “I hope a special, generally accessible exhibition will be prepared.”

Before World War II, Lodz, one of Poland’s major industrial centers, was one of the largest Jewish communities in Europe, numbering over 230,000 or 31% of the city. Almost all of them were killed by the Nazis during their occupation of the city from 1939 to 1945.

“For us archaeologists, such unusual finds are a challenge, but also a great joy. I don’t remember the last time such treasures were unearthed in Łódź.”  said Bartłomiej Gwóźdź, a local archaeologist. “At the moment, each item is carefully cleaned so that nothing is damaged, broken or destroyed.”

Two of the discovered menorahs were lit during Hanukkah celebrations this year by Lodz’s Jewish community, whose offices happen to be on the other side of the block from the building on Północna street, where the trove was discovered.

The trove is not the first notable Jewish relic to be unearthed in Lodz. In 2018, workers excavating a building that was inside the Jewish ghetto uncovered what researchers concluded was a bloody prayer shawl that had been left behind during a 1940 pogrom, when the Nazis attacked Jews who had gathered to pray on Yom Kippur.