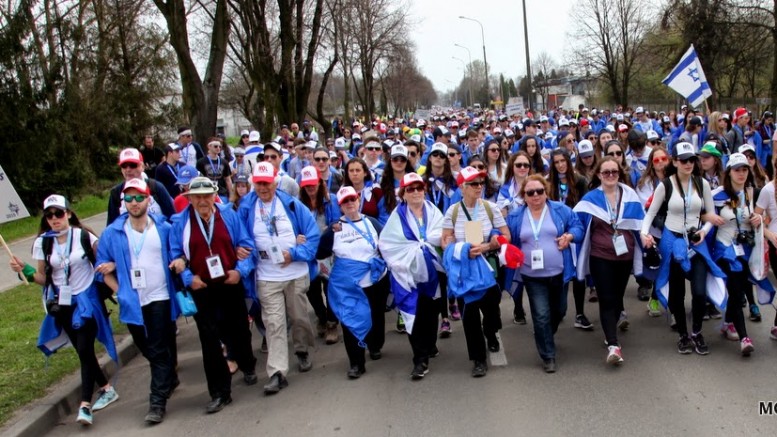 March of the Living is a trip to Poland and Israel to learn about the tragedy of the Holocaust and then about the establishment and survival of the State of Israel. It's not just for teens - adult and young adult applications are now being accepted for the 2016 trip which takes place May 1 - 15, 2016.

(EJNews) – March of the Living is one of the most established travel programs in the Jewish community. Held annually in the spring, it allows Canadians of all ages to travel for two weeks to Poland and Israel to pay tribute to victims of the Shoah.

“The way to get the most meaningful experience is to go with the Holocaust survivors,” says Alana Saxe, director of the Toronto March of the Living. “We really want to encourage everyone who can go to go. Each delegation has the unique opportunity to hear testimony from Holocaust Survivors who travel with their groups.”

Although the high school program is most well known, March of the Living also provides opportunities for adults, as well as  young adults from 21-35. In Poland, these groups visit sites of prewar Jewish life, ghettos and concentration camps as well as participate in international events such as the International March of the Living, a three kilometre walk from Auschwitz to Birkenau. Following that emotionally intense experience, the group travels to Israel to celebrate its independence day and tour the country. 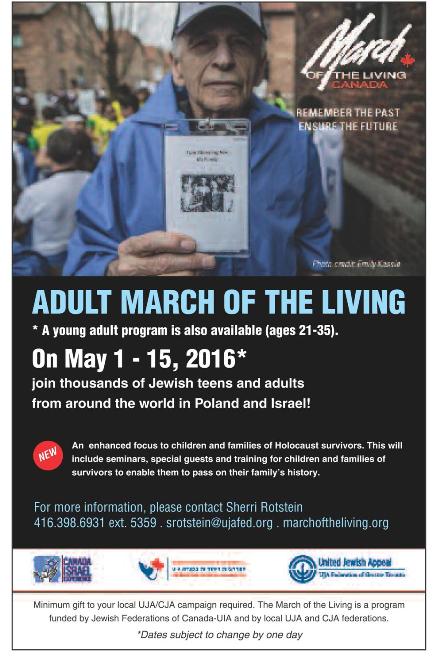 “The young adult program has been going on since 2007 and is one the community’s best kept secrets,” says Sherri Rotstein associate director of March of the Living Canada.  “In the past we’ve been joined by young adults from New York, Los Angeles and Australia.”

Since many of the young adult and adult participants may already have travelled to Israel on other programs, March of the Living is careful to include new and exciting experiences. For example, groups have attended ceremonies honouring Israeli soldiers who sacrificed their lives in defence of the country, visited UJA funded projects, and have spent time volunteering in various communities.

“The shared human experience with our survivors as well as with the brilliant and beautiful participants was the most rewarding aspect of the endeavor and I made friendships that will last a lifetime,” says Jered Shoychet, Chair of the 2015 young adult trip. “This is an incredibly special and important time in our lives to embark on a journey like this.”

Perhaps the most important legacy from the program is the involvement alumni demonstrate upon return.

“The impact has been tremendous,” Saxe says. “They get involved in the community in different ways and it helps to navigate the life choices they make in terms of their connection to Judaism and the connection to their history.”

For example, the trip inspired one alumni to attend the trial of 93-year-old Oskar Groening, former bookkeeper of Auschwitz in Germany this year.

“The program plants a seed and has a long term impact,” Saxe says.

For more information about the young adult or adult programs visit marchoftheliving.org and contact Sherri at srotstein@ujafed.org.

The Canadian March of the Living program is coordinated by Canada Israel Experience, a department of Jewish Federations of Canada – UJA and subsidized by local UJA/CJA Federation campaigns.