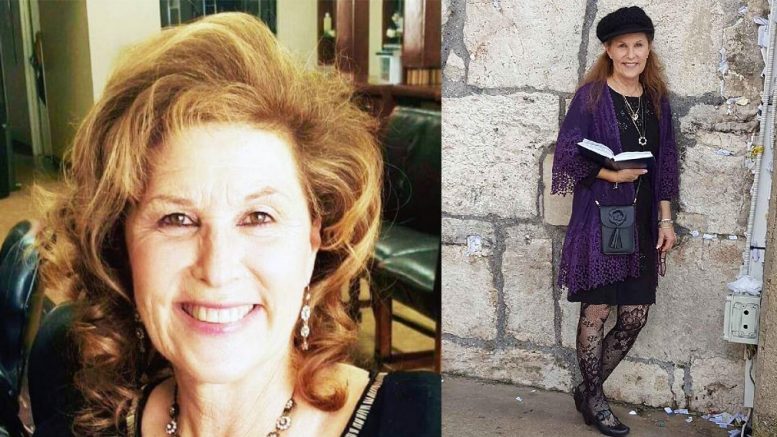 Lori Gilbert-Kaye was murdered protecting her rabbi at the Chabad of Poway shooting that occurred on Passover and Shabbat of April 27, 2019 (Facebook)

POWAY, California (JTA) — Lori Gilbert-Kaye, who was killed in the attack at a Chabad synagogue near San Diego on Saturday April 27, is credited with jumping in front of the synagogue’s rabbi to shield him from the gunman’s bullets.

Gilbert-Kaye, 60, of San Diego, is survived by her husband and 22-year-old daughter.

“Lori you were a jewel of our community a true Eshet Chayil, a Woman of Valor,” her friend Audrey Jacobs, a community activist, wrote in a post on Facebook. “You were always running to do a mitzvah (good deed) and gave tzedaka (charity) to everyone. Your final good deed was taking the bullets for Rabbi (Yisroel) Goldstein to save his life.”

No one was quite so thoughtful as Gilbert-Kaye, said Lisa Busalacchi, her friend since second grade.

“It’s not like she gave a million dollars for a building, but if someone was sick or someone died, she was the first one there with food or asking what she could do,” Busalacchi told the Jewish Telegraphic Agency in an interview.

Busalacchi said that Kaye was deeply committed to the congregation, and had recently traveled to New York to attend the wedding of Rabbi Goldstein’s daughter.

“It made sense that she was [at Chabad]; it was her whole life,” she said.

The rabbi was shot in both of his index fingers and required surgery. He reportedly continued speaking even after being shot, and prayed for unity and peace, and talked about remaining strong in the face of adversity and hate, Chabad.org News reported.

The rabbi also serves as a Jewish chaplain at the San Diego Police Department.

“Anti-Semitism is real and is deadly,” Jacobs also wrote. “Hate crimes are real and are deadly. Lori would have wanted all of us to stand up to hate. She was a warrior of love and she will be missed. May Lori’s memory be a blessing.”

Gilbert-Kaye was in synagogue on Saturday morning, the last day of Passover, to remember her late mother during Yizkor, a memorial service held on major Jewish festivals, the San Diego Union-Tribune reported. Her husband, a physician, was in synagogue with her. When he started to perform CPR on a victim and realized it was his wife, he fainted, according to the report.

“God picked her to die to send a message because she’s such an incredible person,” her friend, Dr. Roneet Lev, told the newspaper. “He took her for a higher purpose to send this message to fight anti-Semitism.”

The rabbi told Lev that Gilbert-Kaye saved his life, according to the report.

Apropos of nothing, Gilbert-Kaye would drop off gifts at her friends’ homes, Busalacchi said. And she didn’t send one card for a birthday or anniversary, she sent three or four.

“Literally it was no less than three cards for every occasion,” Busalacchi said.

Rare was the Friday night that the Kayes did not have Shabbat guests — often there were 10 or more people at the table. She would invite friends to the family’s sukkah on Sukkot, and host a break the fast after Yom Kippur. She made her own challah, and recently forwarded a Passover carrot kugel recipe to Busalacchi.

“She was a devout Trump supporter,” Busalacchi said. “When he was running for office, she would toast” the president, “and after he won she would toast to that.”

“Lori Gilbert-Kaye z’l [of blessed memory] is a Jewish hero, and will be remembered as a hero in Jewish history,” Naftali Bennett, Israel’s minister of Diaspora Affairs, said in a statement. “She sacrificed her own life, throwing herself in the path of the murderer’s bullets to save the life of the Rabbi. But it is clear that such heroism and good deeds are not only characteristic of dear Lori in death, but this is the way she lived her life — at the heart of her community, constantly doing charity and good deeds for those in need.”

Bennett also called her “a true Hero of Israel.”

Gilbert-Kaye’s Facebook page is filled with posts raising funds for groups and individuals in need. Dozens of people, mostly strangers, left messages of condolence on her latest post raising funds for the Jewish charity Chai Lifeline, where her sister works as West Coast director.

Be the first to comment on "Lori Gilbert-Kaye, 60, killed in Poway attack, said to have shielded rabbi from bullets"