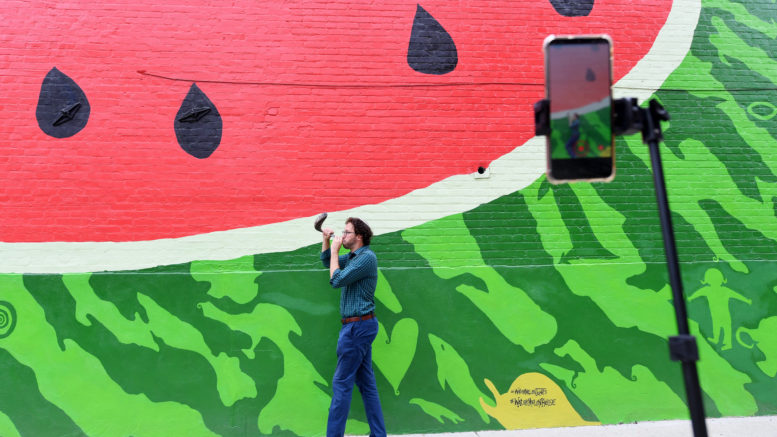 WASHINGTON, DC - SEPTEMBER 09: Rabbi Aaron Potek blows a shofar while recording a TikTok video in front of a watermelon mural on Wednesday September 09, 2020 in Washington, DC. During the Jewish month of Elul, Potek blows the shofar each morning. (Photo by Matt McClain/The Washington Post via Getty Images)

(JTA) — Just a couple of months ago, it seemed like this fall would mark the triumphal return of packed sanctuaries in synagogues across the world, after a year of diminished in-person or, more often, online-only services for the first Rosh Hashanah and Yom Kippur of the COVID-19 pandemic.

But the potent Delta variant, combined with lagging vaccination rates in some places and the lack of vaccines for children under 12, interrupted those ambitions. In recent weeks, many synagogues have switched back to holding services entirely outdoors or virtually. Those that have not are in many cases limiting attendance to members only, making in-person prayer inaccessible for the many American Jews who are not affiliated with a synagogue but do engage with the High Holidays.

Because virtual services weren’t an inevitability this year, there are fewer off-the-beaten path productions than there were in 2020. But with a year and a half of virtual services under their belt, many synagogues are adept at offering an engaging and meaningful experience online, and a wealth of resources has been created to help Jews navigate the High Holidays from the safety of their own homes.

The possibilities can be overwhelming. But we’ve collected a non-exhaustive list of High Holidays offerings, arranged by the kind of experience you’re seeking.

If you want to see your friends: Most non-Orthodox synagogues are holding online services, and if they’re using Zoom as opposed to livestreaming (a decision with implications according to Jewish law), you may be able to see your fellow congregants while you pray. To stay secure and also to shore up finances at a precarious moment, many are requiring preregistration and payment. But if you plan ahead, you should be able to drop in on most communities.

If you want the traditional synagogue experience: Forget to sign up in advance for your local or favorite synagogue’s online services? My Jewish Learning has you covered with a list of no-cost, no-registration-required streaming services, in every U.S. time zone, including many of the biggest Reform and Conservative synagogues in the country.

If you want to feel like you’re in New York City: New York Jewish Week, which JTA acquired this year, has a roundup of local services that can be accessed online. They include four that are taking place outside of synagogues entirely, such as a musical service at a bowling alley and a humanistic service being performed at the Bitter End nightclub.

If you’ve got small kids at home: With American children pretty Zoomed-out and many synagogues offering outdoor, COVID-safe children’s services, there appear to be fewer dedicated online children’s services this year. But there are plenty of resources online for families that prefer not to do in-person activities with their unvaccinated kids. One place to start: PJ Library, the nonprofit that distributes free children’s books to Jewish families, has produced videos and activities that families can explore at their leisure.

If you want to hang with college students (or celebrities): For the second time, Hillel International has organized a livestream spectacular, with events ranging from traditional services to an online tashlich, the ceremony where Jews symbolically cast their sins away, to communal art projects. Each of the dozen events is hosted by a Hillel on a different campus, in a shift from last year’s more celebrity-studded livestream experience. If you’re looking for something more like that, JewBelong, a group that aims to engage people who aren’t connected to Jewish institutions (and that spent part of the last year producing anti-antisemitism billboards), has a brand-new YouTube broadcast scheduled to go live just before Rosh Hashanah begins.

You’d rather learn than pray: Hadar, the non-denominational yeshiva, has pulled together a printable guide of High Holiday readings that could make for a meaningful holiday experience on their own. The organization is also holding a live event on Sept. 15, before Yom Kippur begins that evening. Pegged to the lesser-known Jewish holiday of Yom HaMa’al, which was observed in some Middle Eastern countries until their Jewish communities were displaced during the 20th century, the event will offer lectures and discussions about the forgiveness and repentance themes of Yom Kippur.

If hearing the shofar is the highlight of your holiday: My Jewish Learning is holding an online session focused solely on the shofar blasts that punctuate the High Holiday season. Hosted by Nili Salem, a Los Angeles-based educator and psychotherapist, the event will offer an efficient alternative to traditional services — or a quick accompaniment — at just 10 minutes.

If you want an experience that reflects Jewish diversity: For the second time, Jews in ALL Hues is producing a series of online services for the holidays that center Jews of color. Among the leaders who are participating are Rabbi Angela Buchdal of New York City’s Central Synagogue, Rabbi Mira Rivera of Romemu, the Renewal synagogue; and Sarah Aroeste, a children’s musician who sings in Ladino. On the second day of Rosh Hashanah, services will be led by Jews from the kohenet, or priestess, movement. Children’s services require advance registration and won’t be streamed.

If you really miss traveling: Vaccines have made travel more possible, but stricter rules about gatherings in many places means an international Rosh Hashanah vacation doesn’t totally make sense. Good thing livestreaming means you aren’t limited to synagogues by geography. Many synagogues in Europe did not make the switch to Zoom, but a few are streaming their services — here’s one option in London. And if you want to get an early start on celebrating the holiday, here’s one option for a livestream from Australia, where no in-person services of any kind are allowed this year.

If you just want to sing along: High Holiday prayers and songs are emotionally resonant and powerful to sing and hear. Here’s a Spotify playlist that compiles nearly 3,000 songs channeling the season, many by Mizrachi performers, compiled by Rabbi Yosef Goldman of Shaare Torah, a Conservative synagogue in Gaithersburg, Maryland. There are plenty of other options on the song-streaming platform. You can also just go for Avinu Malkeinu on repeat, from the version of the Yom Kippur song of penitence by a 6-year-old in Australia that went viral last year to the old standby by the jam band Phish.

1 Comment on "Looking for online Rosh Hashanah and Yom Kippur services in 2021? Here are some options, based on your interests."