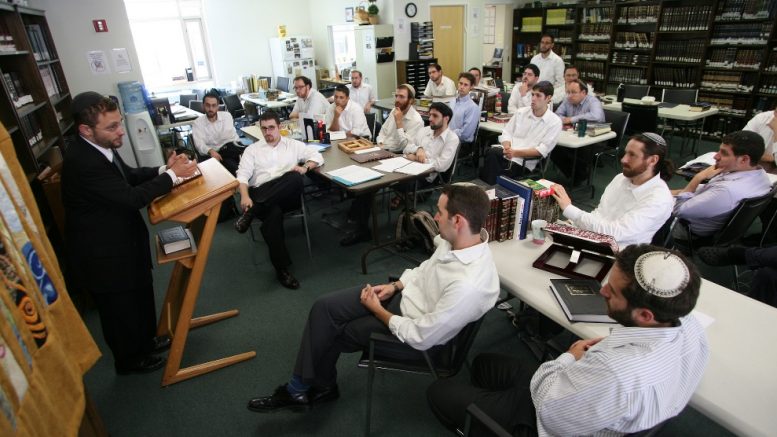 (New York Jewish Week via JTA) — Signaling a red line on how far Modern Orthodoxy is prepared to bend to adjust to societal changes, a liberal New York City seminary will not ordain an openly gay student who is engaged to be married and completing his fourth year of rabbinical studies this spring, The Jewish Week has learned.

In a statement to The Jewish Week, Yeshivat Chovevei Torah student Daniel Atwood, 27, wrote: “Four years ago I came out as gay during my first year at Yeshivat Chovevei Torah Rabbinical School, and it was decided that I would receive semicha [ordination] as their first openly gay student. After four years of study and my completing almost all of the program’s requirements, YCT decided not to give me semicha, news delivered to me only a few weeks ago, three months before my graduation, without any prior conversation on the matter.”

Atwood became engaged in the fall and is living with his partner.

The decision marks a turning point for the rabbinical school, which has served for nearly 20 years as the flagship institution for a subgroup of Modern Orthodoxy often dubbed “Open Orthodoxy.” Founded by Rabbi Avi Weiss as an alternative to the more right-leaning Yeshiva University, the school in the Riverdale section of the Bronx ordained its first class in 2004 and has since ordained more than 100 rabbis.

Since its founding, the yeshiva has sought to balance its Orthodox credentials with its progressive values. The decision on Atwood is being perceived by some as an attempt by the yeshiva to more firmly ground itself in the traditional Orthodox world, which maintains that Jewish law prohibits homosexual relations. While there has been a significant increase in empathy for LGBT Jews in recent years within the community, inclusion has rarely reached the level of communal leadership, and same-sex marriage is universally prohibited.

“I always knew that being in the position that I am in would be a difficult process,” he wrote. “I was always willing to navigate those challenges and work with YCT throughout this process. And I have always been fully committed to living my life according to Orthodox halacha [Jewish law]. At the same time, I refuse to live anything but a dignified life, something I was always transparent about, including not being closeted or secret about my Torah, my identity, my beliefs, or my relationship.

“Most importantly, I am grateful for all the support my immediate family and my partner, Judah Gavant, have given me over my years in rabbinical school.”

In his statement, Atwood said he is pursuing an independent ordination.

In an email to The Jewish Week, Rabbi Dov Linzer, YCT’s president and rosh yeshiva, declined to comment on the specifics of the case.

“We accept all students regardless of sexual orientation, provided that they are fully committed to Orthodox halachic observance,” he wrote. “There have been students in the past that did not receive semicha, each one for reasons specific to his case. Out of respect for all our students, the yeshiva does not discuss particular students and why any student may or may not be receiving semicha.”

Linzer added that “the yeshiva could have handled the process of informing Daniel, and coming to a timely decision, in a much better manner, and we are sorry for the hurt that was caused as a result.”

Rabbi Asher Lopatin, the previous president of YCT, weighed in with his dismay about the decision to deny Atwood ordination.

“I’ve never been more disappointed in Modern Orthodoxy and its institutions,”  he said. “We are supposed to stand for an unfearing loyalty to halacha, and it seems to me that there are so many who are acting out of fear and not who they really believe halachically can be a rabbi. We’re supposed to fear God alone, we’re not supposed to fear what other Jews are going to say about it.

“So it’s a real shameful moment,” continued Lopatin, who headed the yeshiva when Atwood was accepted as a student and stepped down last year. “I hope that there will be dozens of Orthodox rabbis that step forward and say that we want to give this student semicha and not dozens that are cowering behind closed doors.”

Seminarians at YCT interviewed for reactions said they were pained by the decision.

“The last few weeks have been a very challenging and painful time to be a student at YCT,” one student, who asked to remain anonymous because of the sensitivity of the situation, wrote in an emailed statement. “We feel upset and angered about the process that led to this decision. When Daniel got engaged, I was excited because I thought YCT would affirm his choice and still grant him semicha. It was deeply saddening for me to learn that they wouldn’t.”

Alumni of the school said they were informed that Atwood would not be ordained last month in a conference call. Several described feeling distraught at the news, having felt hopeful that Atwood’s ordination would set a path for future gay students.

Several graduates of the school said alumni are divided over the school’s handling of this decision.

“People look to Chovevei to be a beacon for people who are trying to stay committed to the Orthodox world and at the same time not have to compromise their moral values,” said Rabbi Aaron Potek, an alumnus and now the rabbi at GatherDC in Washington, D.C. “If the leadership at Chovevei can’t find a way to make space for gay Orthodox rabbis, that sends a pretty devastating message to that community and to the broader Orthodox community about what is and is not possible to be included in that world.”

Rabbi Avram Mlotek, founder of the Base Hillel outreach project and also a graduate of YCT, said he felt “heartbroken” for Atwood and his family.

Others defended the school, noting the requirement for YCT students to be fully committed to Orthodox halacha and Atwood’s recent engagement to his partner with whom he lives. In 2010, YCT faculty members issued a document urging compassion and inclusion for LGBT members of the Orthodox community, but also asserted that “Halakhic Judaism cannot give its blessing and imprimatur to Jewish religious same-sex commitment ceremonies and weddings, and halakhic values proscribe individuals and communities from encouraging practices that grant religious legitimacy to gay marriage and couplehood.”

“We’re living at a time when people are trying to figure out how someone can be gay and keep halacha at the same time,” said Rabbi Chai Posner, associate rabbi of Beth Tfiloh Congregation in Baltimore and a graduate of YCT. “This would be the first time an Orthodox rabbi would be granted semicha while being openly gay and, fair or not, that reality carries with it a certain level of expectations” in terms of adherence to halacha. “The bar is certainly raised for someone who is going to be a rabbi.”

Rabbi Aviad Bodner, a graduate of YCT, is rabbi of Stanton Street Synagogue on Manhattan’s Lower East Side. He said nearly one-third of his synagogue’s leadership is LGBT.

“The Orthodox community must do more and can do more to be more welcoming to the LGBT community,” Bodner said. Without addressing this specific case, he said that YCT “must ensure that every one of its musmachim [ordained rabbis] is observant and follows halacha.”

“Chovevei is being pulled in two directions,” Potek said. “There’s a group of alumni and students who want Chovevei to be taking these important steps toward greater inclusivity, and then there are alumni who are paranoid about what right-wing Orthodox Jews will think about their Orthodoxy.”

This is not the first time YCT’s actions have sparked debate among its alumni. In 2016, several graduates wrote an open letter opposing the practice of “partnership minyanim,” traditional-style services in which women lead parts of the service and a practice embraced by several YTC alumni.

Linzer, who has been the rosh yeshiva of YCT since its founding and assumed the role of president last fall, has long been an advocate for acceptance of LGBT members of the Orthodox community.

In his email to The Jewish Week, he noted that the yeshiva “regularly brings in members of Eshel, JQY [two support groups for gay people from traditional backgrounds], and the LGBTQ community, as well as rabbis, poskim, and community leaders, so that we can best chart a path forward that is rooted in Torah, halacha, and responsible rabbinic leadership, and that honors the inherent dignity of every human being created in God’s image. We continue to grapple with this issue and are always learning in the process.”

In an online discussion organized by the Jewish Orthodox Feminist Alliance, Linzer discussed the Jewish legal ramifications of two men living together and wrote that “our focus has to be not on halacha, but on communal acceptance and on making gay men and women, and their spouses or partners, as well as their children, fully welcome and fully a part of our communities, synagogues, and schools.”

He continued: “On a communal level, we should be very wary of assuming that we know what goes on behind closed doors. It also is none of our business. We do not presume to know, or believe it our business to know, which family is or is not keeping the laws of niddah [ritual purity], and to judge them accordingly, and this should be no different.”