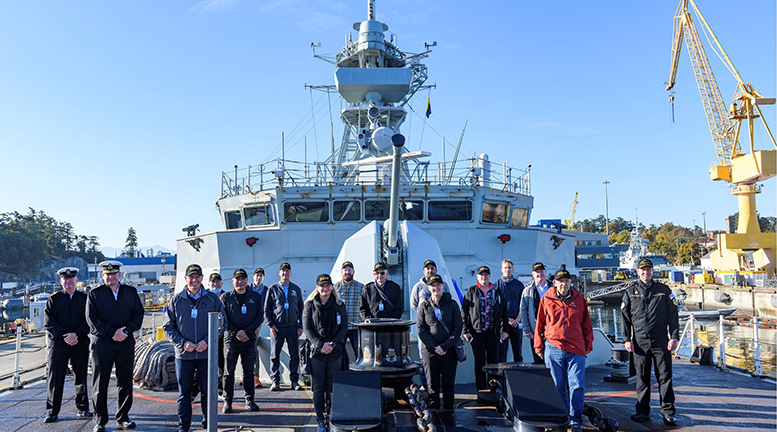 In harbour – standing on the Fo’c’sle of HMCS Calgary, at CFB Esquimalt, Dockyard, Esquimalt, BC (04 Oct 21). Photo supplied.

(AJNews) – It isn’t every day that civilians are afforded the opportunity to see inside a Royal Canadian Navy (RCN) ship, let alone sail with its crew with almost unfettered access to the place. Yet, that’s exactly what happened in early October when, representing CIJA, I joined 13 leaders in their respective fields from all across Canada and embarked the HMCS Harry De Wolf, which recently crossed the Northwest Passage as part of the navy’s Canadian Leaders at Sea (CLaS) program.

The RCN’s CLaS program is designed to help familiarize civilian stakeholders with the work sailors do and the capabilities of their ships – and to help bring Canadians closer to their navy. With exposure to the work of the RCN at sea and ashore, CLaS participants acquire an appreciation for how the RCN protects and defends Canada at home and abroad. Upon completion, ClaS alumni become goodwill ambassadors and share the message of what the Royal Canadian Navy is all about. This naval program parallels CIJA’s mission program – in which we take a variety of Canadian leaders to Israel to learn first-hand about the country and her people.

These are some of the lessons I took from my CLaS experience.

Operating in highly complex environments and under ever-changing circumstances, the RCN serves to defend the Canadian Coast. It fights drug trafficking and overfishing, protects our allies and, using a small number of assets as effectively as possible, participates in disaster relief and rescue missions globally. The RCN leadership I met demonstrated an earnest and fresh perspective, a willingness to evolve and improve, and a determination never to give up. This is not unlike the work we undertake at CIJA on the many advocacy issues we address on behalf of the organized Jewish community – from advocating to enhance food security programs, to combating antisemitism, to procuring accessible, affordable housing for people with developmental disabilities.

The RCN is committed to diversity, as was evident among the sailors aboard HMCS Harry De Wolf and ashore at HMCS Discovery and CFB Esquimalt. This is not the Navy seen in WWII-era movies, featuring all white men. While there is a rich mosaic of genders, ethnicities and backgrounds throughout the ranks, evidence that diversity is improving, there is still much work to do, a fact acknowledged by the Navy’s senior leadership during their multiple briefings. Similarly, under CIJA’s tent, we welcome a diversity of political ideas and backgrounds – a wide range of perspectives also represented on the professional team with whom I work every day.

All RCN sailors and personnel are remarkably proud of what they do and genuinely cherish the opportunity to serve their country with purpose and passion. Without question, the many sailors I spoke to felt positive about their choice to join the Navy and represent Canada around the world.

For me, the CLaS experience was more than just learning about the Royal Canadian Navy; this experience was about the purpose, leadership, teamwork, diplomacy, cooperation, and passion of the people. Hearing stories about what led sailors to join the forces and to serve Canada was a both humbling and inspiring. You don’t often hear people talk about their jobs with such passion – unless, of course, you speak with my CIJA colleagues (both lay and professional), who serve Canada’s organized Jewish communities with similar dedication.

The exceptional nature of the program, the territory that we covered and the relationships that were engendered attest to the value of this kind of program and serve as an example of what effective advocacy is – not unlike the positive outcomes from CIJA’s Israel fact-finding missions and other advocacy we undertake every day.

Thank you to Commodore David Mazur, OMM, CD Commander Canadian Fleet Pacific; Commander Corey Gleason, CO HMCS Harry De Wolf and his crew; as well as Lieutenant-Commander Melissa Desjardins, MSM, CD, AdeC and to the Royal Canadian Navy for a uniquely memorable experience that I will always cherish. Canadians have lots to be proud of in their Navy.

Nico Slobinsky is Senior Director, Pacific Region at  The Centre for Israel and Jewish Affairs (CIJA).

Be the first to comment on "Leadership, teamwork, and diplomacy: Lessons at sea with the Royal Canadian Navy"