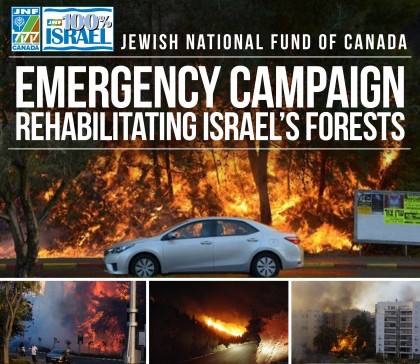 (EJNews) – There are fires raging through Israel, some set by arsonists. For the past three days, Keren Kayemeth L’Israel (KKL-JNF) firefighters and staff have been battling the fires all over Israel, which have already destroyed thousands of acres of forests and caused huge damage to property. Almost no rain has fallen since the beginning of autumn and under these conditions it is almost impossible to stop forest fires once they have begun. This fire is considered the largest forest fire, since the 2010 Carmel forest fire.

KKL-JNF Coastal Plain Forests Director Gilad Mastei said that the current weather conditions in Israel are reminiscent of those that preceded the huge Carmel Forest Fire. He warned that the places where the fires are raging “are dangerous, and unauthorized people should not go near them. Even after the fires are suppressed, trees collapse so people must stay away from burnt forests.” Tziyon Biton, KKL-JNF Central Region Operations Officer, said that “we’re fighting to protect our homes, forests and parks. Entire forests have been wiped out.” KKL-JNF declared a full mobilization of its firefighting forces, who were joined by additional staff to be a part of the general effort to save the forests and protect citizens living in communities in close proximity to forests.

More than 200 KKL-JNF firefighters and staff, together with 20 KKL-JNF fire trucks and heavy mechanical equipment are part of the firefighting efforts in forests and open spaces.

The main fire locations include Eshataol Forest, where 115 acres of forest were burnt; the huge fire in the Jerusalem Mountains, which began next to the community of Nataf and spread to other forest locations, including Canada Ayalon Park, and destroyed about 1,150 acres of forest. Also – Hazorea Forest, Horshim Forest, Gilon Forest, Om el-Fahem Forest, Devira Forest, and more. Some sixty thousand people were evacuated from their homes in Haifa today as the wildfires threatened the city. Residents of a total of 11 neighborhoods in the city were told to leave their homes, as fires in at least five locations consumed homes and businesses  “We’re in a state of war,” Haifa fire service spokesman Uri Chibutro told Channel 2 news.

In a letter to the Jewish Communities of Canada, JNF leaders including JNF Edmonton President Jeff Rubin wrote, “This is an emergency situation and our family in Israel needs us. KKL has called upon us, in the diaspora, to help. KKL’s and Israel’s Fire & Rescue Services need us now more than ever. The KKL Fire Services department needs your support. Every dollar that you donate will go directly and immediately toward increasing support for the firefighters who are battling to save property, forests, and lives.

Be the first to comment on "JNF Canada launches emergency campaign: Fire rages in Israel"