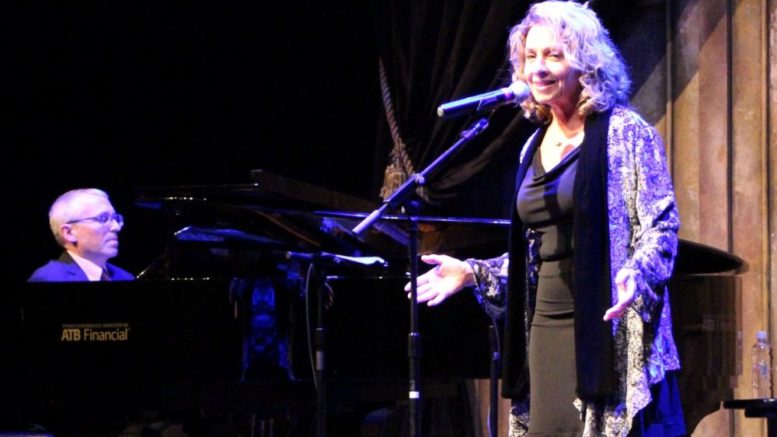 Jewish Federation of Edmonton hosted a fraylach 2019 United Jewish Appeal kickoff event on September 19 at the Citadel Theatre. Yiddish Songbird Eleanor Reissa and pianist Jerry Korman lit up the stage with a celebration of culture and community.

(EJNews) – The Edmonton Jewish Community gathered on September 19 at the Citadel Theatre for the launch of the 2019 United Jewish Appeal.

The event, hosted by the Jewish Federation of Edmonton was a terrific mix of speeches about the importance of UJA, the inaugural presentation of the Kol HaKavod Award to Dianne and Irving Kipnes for their outstanding contributions and an impactful keynote address by Vancouver dentist Dr. Sherri Wise about her own experience as a victim of terror and the importance of victim advocacy within the Jewish Community.

The entertainment portion of the evening was a high energy and thoroughly enjoyable performance by Yiddish songbird Eleanor Reissa accompanied by pianist Jerry Korman.

Reissa is one of the world’s foremost interpreters of Yiddish song and she delighted the Edmonton audience with her repertoire of songs, and hilarious stand up humour. Her stature is small but her stage presence was ever so large that she filled the theatre with joy. You certainly didn’t need to understand Yiddish to love her show, but it was extra special for those in the audience that did.

Earlier in the evening, Dr. Sherri Wise gave an impassioned speech describing her experience as a young dentist in 1997 who traveled to Israel to volunteer in a dental clinic for underprivileged children. While in Jerusalem, having lunch with friends on Ben Yehuda Street, she was seriously injured in a triple suicide bombing that killed over 25 people and injured nearly 200.

After the bombing, Sherri was overwhelmed by the outpouring of sympathy, help and support that she received. Among those who provided assistance was the Jewish Federation of Greater Vancouver, which sent help, both while Sherri was still in hospital in Israel, and later, when she was able to return to Canada.

The horrifying attack Sherri experienced could have made her bitter or reclusive. Instead, she has turned the experience into something positive for her and for the countless others she has helped.

In gratitude to all those who helped her recover, and determined to help other victims of terror, Sherri worked for seven years with the Canadian Coalition Against Terror. She was instrumental in the passing of Bill S-225 by Canada’s Parliament in March 2012, the “Justice for Victims of Terrorism Act.” Later that year, Sherri was awarded the Queen Elizabeth II Diamond Jubilee Medal for her work.

Sherri believes that she was spared for a reason, and that belief fuels her desire to share her story with others who are struggling with trauma in their lives. She travels around North America frequently, speaking to Jewish Federations and in other venues, inspiring others with her story. She is a firm and vocal advocate for Jewish Federations, having seen firsthand the help they provide to Jewish people in need, wherever they may be.

Sherri’s address to the community was truly inspirational, reminding everyone in attendance how fortunate we are to be part of a thriving, caring community.

Yasher Koach to Susan Schiffman, UJA Director for the Jewish Federation of Edmonton for consistently pairing meaningful components from several genres at the annual UJA launch. The joy of our culture, the importance of giving generously, the value of the work of Jewish Federations – these elements, when combined, paint a compelling picture about the importance of giving to the United Jewish Appeal.

This year’s UJA co-chair Howie Sniderman stated, “We’re all here tonight to support a very important collective Jewish project. Thanks to the generosity of donors to UJA Campaigns across North America, our fellow Jews in our own community, in Israel, and around the world receive support in many ways: For education and development, for cultural programs and, for those in need, social services and financial assistance.

“Our collective gift to the United Jewish Appeal contributes to the strength, continuity and unity of Jewish people everywhere. Here at home, the money we raise provides a consistent base of funding and support for programming, for our local Jewish Day schools, Jewish Family Services, Camp BB-Riback, BBYO, and for over a dozen other local partners and beneficiaries.

“On a national level, funds that we all donate are used in the fight against anti-Semitism and BDS, and to advocate for Canadian Jewish interests. In Israel and in the countries of the former Soviet Union, we help the most vulnerable. Each year, our community donates over $1 million to the UJA Campaign. For our small community, this is a lot of money …. but our needs are great.

“This year, once again, our goal is to raise over $1 million in support of the needs of our Jewish community in Edmonton, in Canada, in Israel, and around the world.

“Throughout the coming weeks, our team of volunteer canvassers, which includes many of you here tonight, will be reaching out, asking for your support. When you get the call, I’d ask that you please remember how many Jewish people in Edmonton and around the globe you impact with your gift. Each year the overall needs grow, as does the cost of Jewish life, just the same as everything else in life.

“In addition, as our community ages, and people retire, move, or pass away, the burden falls to the rest of us to make up the difference. So, when your canvasser calls, I’d ask that you please consider increasing your gift this year, to help UJA keep pace with our collective needs.

“My personal vision and mission for our community, and the project that my co-chair Ron Sorokin and I want to focus on in the coming months, is nurturing, mentoring, engaging with and encouraging the next generation of leaders of our Jewish community here in Edmonton. Each of the beneficiaries of our community campaign need and want the energy and creative mindset of the young leaders. It is nothing less than our future and, more important to all of us, their future that is at stake. Stay tuned for more on this.

“And, the most important message that I really want to deliver to each of you at the start of our campaign, is a great big thank you. Thank you for your past generosity and for standing with so many others to help nurture, sustain, and grow Jewish life. And thank you in advance for your continued support.”

Click here to view the JFED photo gallery of the event.