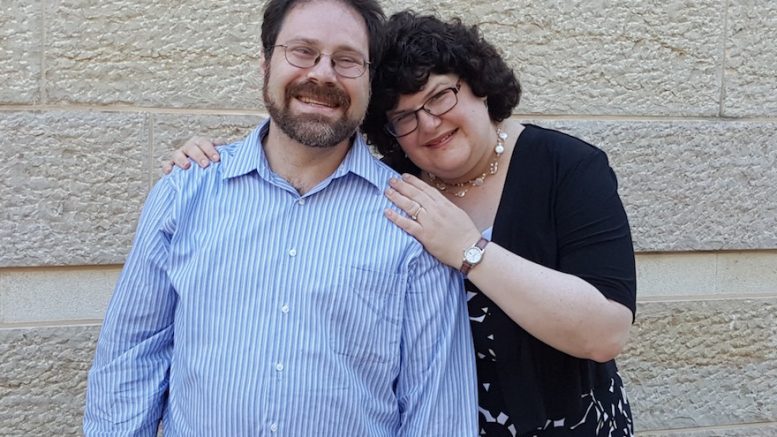 Rabbi Beth Naditch and her husband had already been talking to their children about anti-Semitism when bomb threats hit two of their sons’ schools the same morning. (Courtesy of Naditch)

NEW YORK (JTA) — On the morning of March 7, Rabbi Beth Naditch found out that two of her three children’s schools had received bomb threats.

And while the news was shocking, the threats were something Naditch and her husband had tried to make sure their sons — ages 9, 12 and 14 — would be ready for.

A week earlier, a relative had been evacuated from a Jewish community center during another bomb threat wave. And as a rabbi at a Jewish eldercare facility, Naditch spoke regularly with Holocaust survivors or refugees who were feeling echoes of their pasts.

So she and her husband had spoken to their boys about anti-Semitism, why it’s returning and what to do if it reaches them.

“My husband and I were just waiting for it to hit our kids,” Naditch said. “We were trying to walk a fine line between having them prepare and be aware of safety measures, aware that there are people in the world who want to hurt us or other people because they are anti-Semitic or racist, and trying not to terrorize them.”

The Boston-area campuses were two of at least a dozen Jewish day schools that have received bomb threats since the beginning of the year. Most of the threats have targeted JCCs, largely affecting either adults who can process the distress or preschoolers too young to perceive it.

But the threats against Jewish schools have placed parents, teachers and administrators in an uncertain position. Many of their students are old enough to understand the threats, but not old enough to cope by themselves. So schools have tried to walk a fine line: They want to give students enough information to answer their questions, but not enough to traumatize them. They want to explain anti-Semitism, but not normalize it.

“This is something we may do, but it’s not a fun thing, it’s not a good thing, it was an unfortunate thing that happened,” Rabbi-Cantor Scott Sokol, head of school at MetroWest Jewish Day School, said he told his students. “We’re not looking to make it a bigger deal than it was. At the same time, they understand this is something that happens more to kids at Jewish day schools.”

Many schools delivered their messages based on the grade level. Students up to third grade in some schools were told they were going on a fire drill. Fourth- and fifth-graders in several schools were told there was a threat, they were safe and little more. Middle schoolers and high schoolers, many of whom read the news on their own, were given a fuller picture.

But every school has placed limits on its communication. At MetroWest, Sokol asked students and parents not to post about the threat on social media. At the Hebrew Day School of Ann Arbor, Michigan, and Aleph Bet Jewish Day School in Annapolis, Maryland, both threatened on Feb. 27, administrators opted to give the students no more information than necessary.

“Talking that directly with our older students helped them understand, ‘OK, this was a threat, it’s no longer there,’” said Sarah White, head of school at Aleph Bet. “That was the only conversation we’ve had with them. At school, you’re expected to be safe. If things are organized, things are calm and teachers are in control, you feel safe.”

Administrators at various schools told JTA that that their top priority was to get students back in class and on schedule. Several schools returned to a regular school day following a brief evacuation. At MetroWest, kids were dressed in pajama pants celebrating the Purim holiday on the day the threat came; they opted to continue their weeklong festivities. At the Charles E. Smith Jewish Day School outside Washington, D.C., which also was threatened on Feb. 27, high school principal Marc Lindner said police did not require the students to leave class.

“Our general approach was we wanted to keep things as normal as we possibly could,” Lindner said. “There wasn’t anything real about it. It was just an empty threat. That’s what was communicated.”

A couple administrators said speaking with anxious parents may have been the biggest challenge they faced — though no administrator told JTA that students had been pulled out of school. One of those parents, Rabbi Abe Friedman, said that while he was concerned with his 9-year-old’s safety, she was more interested in talking about the games they played during the evacuation.

“My wife and I were more emotionally affected by it than she was,” said Friedman, whose daughter attends the Perelman Jewish Day School outside Philadelphia, another school threatened on Feb. 27. “She didn’t seem all that interested when I brought it up, and I didn’t want to put it on her because of my need to talk about it.”

For teachers, the bomb threats have meant broaching anti-Semitism with children, sometimes before it appears in their curriculum. Several school officials said they have filtered that conversation through the lens of how much support they have received from Jews and others in the wider community.

“They are taking what’s happening across the nation very personally,” said Allison Oakes, head of school at the Lerner Jewish Community Day School in Durham, North Carolina, which was threatened on Feb. 22. “We wanted to focus on, yes, this is happening in our world, but let’s take a look at everyone trying to support us.”

As the wave of bomb threats rolled on, the Anti-Defamation League put out a list of “5 Tips for Talking with Children about Bomb Threats at Jewish Community Centers.” Like Oakes, the ADL urged adults to focus on the “helpers” who supported the community after a threat.

And some parents and teachers have tried to explain the threats by way of the Jewish calendar — particularly the recent holiday of Purim, which celebrates the Jews’ survival in ancient Persia in the face of an enemy’s threat. This, Naditch told her sons, is sort of like a modern version of that story.

“He really wants to know why,” Naditch said of one of her boys. “Why would anybody want to hurt us just because we’re Jewish? And it’s a hard thing to answer.

Be the first to comment on "At Jewish schools hit by bomb threats, trying to teach students just enough to cope"