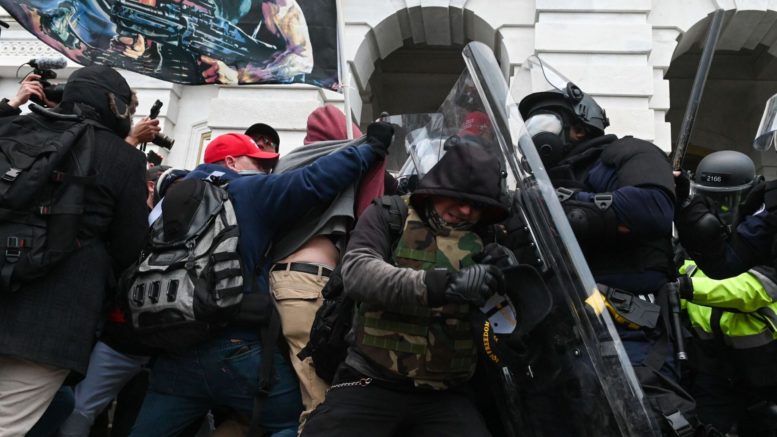 Riot police push back a crowd of supporters of US President Donald Trump after they stormed the Capitol building in Washington, DC on Jan. 6, 2021. (Roberto Schmidt AFP via Getty Images)

(JTA) — AIPAC hardly ever pronounces on any issue that does not relate to Israel. It’s also loath to criticize a sitting president.

But the preeminent pro-Israel lobby did both on Wednesday after rioters supporting President Donald Trump stormed the U.S. Capitol to stop the count of electoral votes that would formalize Joe Biden’s win.

“We share the anger of our fellow Americans over the attack at the Capitol and condemn the assault on our democratic values and process,” AIPAC, the American Israel Public Affairs Committee, said in a statement posted to Twitter Wednesday evening. “This violence, and President Trump’s incitement of it, is outrageous and must end.”

The statement, crafted during an emergency meeting of the lobby’s executive committee, was among a host of extraordinary comments on American democracy by Jewish groups, many of which typically steer clear of partisan politics.

AIPAC was not the only mainstream Jewish organization to speak out on an extraordinary day that resulted in what once was unthinkable: police spiriting into safe havens hundreds of lawmakers while marauders roamed and looted the Capitol. Its statement, crafted during an emergency meeting of the lobby’s executive committee, also was far from the only one to criticize Trump explicitly.

Trump invited protesters to Washington, D.C., and earlier Wednesday urged them to march on the Capitol. As the situation grew tense, he simultaneously urged his supporters to disband and told them that he “loved them.”

The Anti-Defamation League also named Trump. “The violence at the US Capitol is the result of disinformation from our highest office,” it said in a tweet. “Extremists are among the rioters in DC supporting President Trump’s reckless rhetoric on America’s democratic institutions.” ADL’s CEO Jonathan Greenblatt called on social media to suspend Trump’s accounts; a number of platforms eventually heeded those calls.

The Jewish Council for Public Affairs, the umbrella body for Jewish public policy bodies, also named Trump. “This was a direct assault on our democratic process, and nothing less than an attempt to disrupt the peaceful transition of power in a presidential election and an act of sedition,” it said in a statement. “We urge in the strongest possible terms that President Trump and others immediately cease incendiary rhetoric and restore order.”

Two legacy groups were cautious and condemned the violence while not directly blaming Trump. The American Jewish Committee called on Trump “to call for an immediate end to the riots and respect the certification process currently underway,” without noting that Trump started the fire, as many others had — including some leading Republicans.

The Conference of Presidents of Major American Jewish Organizations, the umbrella foreign policy group for the Jewish community, did not name Trump at all, although its statement was forceful. “We are disgusted by the violence at the US Capitol and urge the rioters to disperse immediately,” it said in a statement. ”Law and order must be restored, and the peaceful transition of administrations must continue.”

B’nai B’rith International “strongly urged” Trump “to publicly condemn the rioters.” “Though it’s horrifying to see the U.S. Capitol under siege, the seeds for this have been planted and nurtured for many years,” the statement said.

The Orthodox Union weighed in at first by endorsing the Presidents’ Conference statement, but on Thursday morning issued a statement pointedly aimed at Trump and with a tone of relief at the prospect of Trump’s term ending and a new administration incoming.

“We are deeply saddened and shaken by yesterday’s violent events at the U.S. Capitol that have badly upset our sense of peace and security,” the statement said. “There is no place for the kind of outrageous incitement that fed that assault on the pillars of our democracy. It must stop. We call upon President Trump to do all that is in his power – and it is indeed in his power – to restore that peace.”

It concluded: “We pray to the Almighty that He grant strength and wisdom to President-elect Biden and Vice President-elect [Kamala] Harris as they lead this great country forward in unity, peace, and security.”

“The U.S. Capitol is more than a majestic building,” Cohen said. “It is the true house of the people and the home of democracy. It is the hope of the nation. You feel it when entering its doors and walking its halls. Today, it was a place of shameful violence and tyranny. Stop or we are lost.”

The Conservative movement’s Rabbinical Assembly called on Trump “to defend and uphold the constitution of the United States,” but did not blame him for what it called an “attack on democracy and its institutions.”

The Reform movement’s Religious Action Center was less shy, saying, “The fact that today’s events were encouraged by the President of the United States who has refused to accept his electoral loss is equally terrifying and heartbreaking.”

Liberal groups like the RAC have throughout Trump’s presidency had an adversarial relationship with him, criticizing both his policies, including his anti-immigration policies, and his expressions of bigotry.

It was no different on Wednesday. “Earlier today, an armed seditious mob stormed the Capitol at President Trump’s behest, with the aim of preventing elected Members of Congress from certifying the presidential vote in the Electoral College,” said the Israel Policy Forum, a two-state advocacy group. (A staffer describes his experience during the tumult here.) “We unreservedly and wholly condemn this.”

“I’m heartbroken for our country,”  National Council of Jewish Women CEO Sheila Katz said on Twitter. Hadassah, the women’s Zionist organization, alluded to Trump, saying that “The criminal behavior and events of this afternoon are abhorrent, as are attempts to disrupt democracy with incitement to violence. As Jews, we know the power of words and demand our elected leaders raise the level of discourse and lead with civility.”

Morton Klein, the president of the Zionist Organization of America, a group known for its support for Trump’s Israel policies, said on Twitter that the marauding in the Capitol was “thoroughly unacceptable & intolerable” but went on to say, baselessly, that the FBI was investigating a claim that the marauders belonged to Antifa, a catchall term for leftist protesters.

That allegation was circulating widely among Orthodox supporters of the president on Wednesday night, many of whom decried the violence in D.C. but not the pro-Trump movement that led the mob to convene.

The Republican Jewish Coalition’ on Thursday morning congratulated Biden on winning the election, and in its statement included a plea for a peaceful transition to power.

“After the abhorrent mob attack yesterday on our Capitol, our elected officials went back to work, fulfilled their duty under our Constitution, and certified the results of the 2020 election,” the RJC said. “Now is the time for the same peaceful transition of power that the U.S. has carried out for over 220 years,” the RJC said. “It is also time for healing and unity in our country, because we face many serious and significant challenges.”

The statement made no mention of Trump. The congratulations to Biden were late: His race was called on Nov. 7, but a number of groups allied with his outlook, among them Jewish groups, hesitated to congratulate Biden at the time, seemingly mindful of Trump’s refusal to accept the election’s outcome.

The Jewish Democratic Council of America was scathing, calling for Trump’s removal from power. “President Trump has abused his power, endangered American lives, and undermined our democratic institutions,” it said.

“Today, he intentionally jeopardized security at the Capitol to further his depraved autocratic agenda, risking the lives of the Vice President and Republican and Democratic lawmakers,” the JDCA said. “Donald Trump was impeached by Congress for abuse of power one year ago, and today he should be immediately removed from office for sedition, insurrection, and abuse of power.”

Be the first to comment on "Jewish groups respond to violence in DC with ‘outrage,’ ‘disgust’ and criticism of Trump"