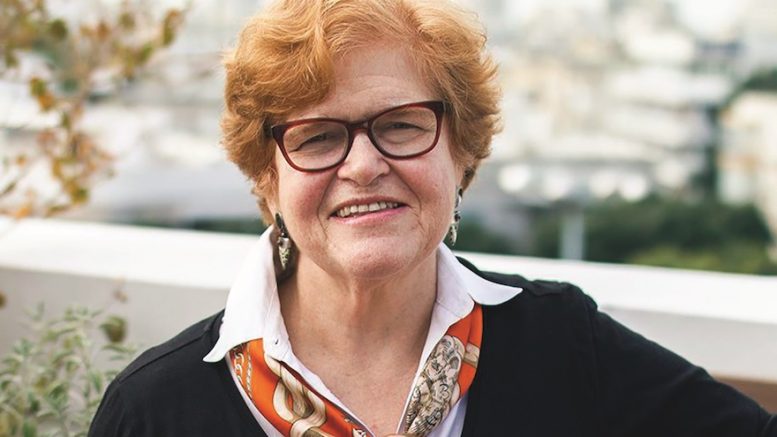 Deborah Lipstadt, the renowned Holocaust historian, is the author of the forthcoming book "Antisemitism Here and Now." (Osnat Perelshtein)

“We are compelled to urge you to hold the Committee’s hearing on Prof. Lipstadt’s nomination without further delay,” said the letter from the Jewish Federations of North America, the Orthodox Union and the Anti-Defamation League.

The letter was addressed to the chairman of the committee, Democrat Robert Menendez of New Jersey, and its ranking member, Republican James Risch of Idaho, although its clearly intended target was Risch, who is using his prerogative to hold up a hearing.

Risch told Jewish Insider this week that he was concerned about past Lipstadt tweets in which she was critical of Republican lawmakers. Other Republican lawmakers fault her for appearing in an ad during last year’s presidential campaign likening former President Donald Trump’s rhetoric to those of the Nazis in the 1930s, before the Holocaust.

This week, Lipstadt testified on behalf of the plaintiffs in a civil suit against the organizers of the 2017 white nationalist rally in Charlottesville, Virginia, where Trump famously said there were “very fine people on both sides” and which Biden made a centerpiece of his presidential campaign.

In their letter, the three Jewish groups emphasized that they do not as a practice endorse nominees, but they said there was special urgency given the recent spike in antisemitism worldwide. They noted Lipstadt’s credentials as a scholar of the Holocaust — she teaches at Emory University in Atlanta — and emphasized that she has identified instances of antisemitism on the left and the right.

“There is no question that Prof. Lipstadt has the credentials to deserve a proper hearing before the Committee on Foreign Relations — and that hearing is now overdue,” the letter said.

A letter bringing together the ADL and the O.U., two groups often on opposite sides of church-state issues, is itself unusual.

The situation is unprecedented because it was only last year that Congress elevated the role of antisemitism monitor to ambassador level, which requires Senate confirmation.

Ambassadors are frequently political appointees — some are retired lawmakers or campaign donors — with pasts packed with political statements. Occasionally, however, these statements have risen to a level that has prompted senators to use their prerogative to block a nomination.

Sam Fox, a board member of the Republican Jewish Coalition, had in 2004 contributed substantially to Swift Boat Veterans for Truth, a group that spread false claims about the Vietnam service of then-Sen. John Kerry, the Democratic presidential nominee that year. In 2007, Kerry blocked Fox’s nomination to be ambassador to Belgium, citing his role in the Swift Boat ad. President George W. Bush used his prerogative to name Fox to the role while the Senate was in recess.