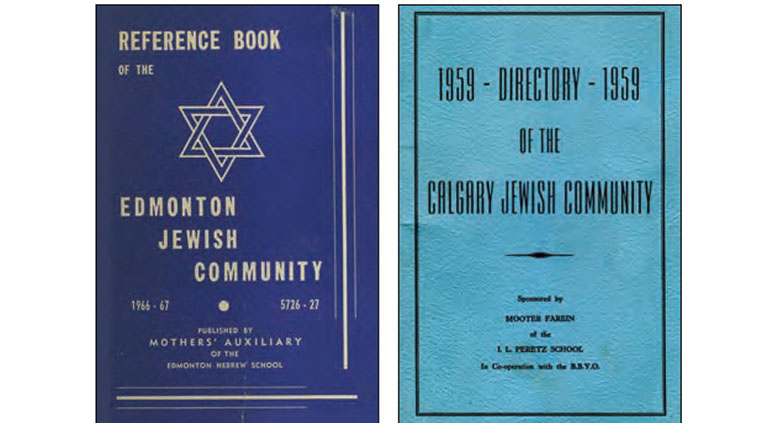 (Editor’s note – this article is a sidebar accompanying an article about the resurgence of the Edmonton Jewish Community Directory.)

(AJNews) – According to the Jewish Archives and Historical Society of Edmonton and Northern Alberta (JAHSENA), what is believed to have been the first Edmonton Jewish Directory was published in 1966 as a project of the Edmonton Hebrew School [Talmud Torah] Mothers’ Auxiliary. Minutes from the archives at JAHSENA identify Eve Uram and Mona Witten as having been the co-chairs in 1967. They were succeeded by Ruth Nolan the following year.

Archives at the Jewish Historical Society of Southern Alberta in Calgary reveal that the Mooter Farein (Mothers’ Club) of the I. L. Peretz School in Calgary began producing the Calgary Jewish Community Directory as a fundraiser for that school in 1959, the same year its new school building was opened. The Mooter Farein executive at that time included Sylvia Ashkin, Freda Driben, Sophie Friedman, Bertha Gold (president), Frances Pearlman, Helen Signer, Rifka Switzer, Ethel Waterman, Riva Wolf and Freda Yacowar. Jean Libin – who passed away just last month at the age of 101 – was the inaugural coordinator of the Calgary Jewish Community Directory.

“People were so exciting about getting it,” said Chulsky who, in addition to her volunteer efforts, was a staff member of The Calgary Jewish Academy for 10 years, serving for a time as Director of Admissions.

“The directory was a big deal.  People loved it.”

Chulsky hopes that the revival of the directory in Edmonton will inspire parent volunteers at The Calgary Jewish Academy to step up and bring back their book too.

Game on in the Battle of Alberta!

Sincere thanks to archivists Colleen Paul at JAHSENA and Roberta Kerr at JHSSA for their dedication to preserving and sharing the history of our Jewish communities.  Community members who have photos and documents pertaining to local Jewish history are urged to share them with our archives so that researchers and writers can continue to tell the proud story of Jewish Alberta for generations to come.

Contact the Jewish Archives and Historical Society of Edmonton and Northern Alberta at jahsena@shaw.ca or 780-489-2809 or visit their website at www.jahsena.ca.

Contact the Jewish Historical Society of Southern Alberta at jhssa@shaw.ca or 403-444-3171 or visit their website at www.jhssa.org.

Be the first to comment on "Jewish Directories: Looking back – a tale of two cities"