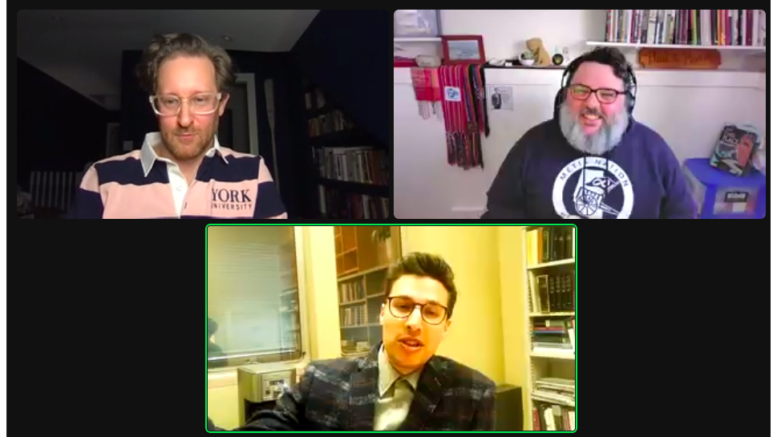 (AJNews) – Two errors in the most recent Canadian census were the starting point for a discussion between a Jewish and a Metis academic about the commonalities and distinctions between their peoples.

They began by discussing the 2016 census results, which erroneously said Canada’s Jewish population had decreased by 50 per cent while the Metis population doubled. This was the subject of a paper Gareau and Koffman collaborated on.

“We have this interesting situation where the state has developed tools that are meant to just count people and reflect reality as it is out there and capture the numbers. But instead, what we get is a kind of messy process through which the state creates categories of people that don’t necessarily reflect the people that are out there,” explained Koffman.

The census results have material impacts on the communities it counts, he added.

“Jewish community leaders have always been interested in encouraging as many Jewish people as they can to identify themselves [as Jewish], because resources from the state flow depending on the size of your communities,” said Koffman.

“This is certainly more true during multiculturalism, but it continues to be significant for all kinds of issues about charitable donations, about access to resources, about education, about health outcomes, aging, lots of things.”

“When it comes to resources, then those resources don’t go to the Metis Nation of Alberta, Saskatchewan, Manitoba, Ontario or B.C. It goes outside, so it really is important to have some sort of nation representation of numbers,” Gareau said.

“They’re not there. They’re just everywhere … It undermines our sovereignty as a nation.”

Gareau, interestingly, took Jewish Studies for his undergraduate degree. When he started in 2002 at Concordia University in Montreal, he had initially studied cultural anthropology, but didn’t find it compelling so he switched to Religious Studies, which paved the path to his Jewish Studies major.

He was drawn to religious studies because as a Metis person from Saskatchewan, many of the “social relations” within his community occurred in religious, namely Catholic, spaces.

“It’s the same thing that Metis Studies is doing. We’re not defined by language or history, we’re all doing this around the table, talking about these experiences. It’s pluralistic and engaging,” said Gareau.

By contrast, Koffman got into Jewish Studies via anthropology, which he also studied in Montreal, but at McGill University.

“When I started my academic work, I wanted nothing to do with Jewish-anything, as a young Jewish boy who had left Toronto and went to McGill, I was learning about all kinds of things that were exploding my world and it seemed incredibly parochial, so I didn’t take a single Jewish Studies course in my undergrad,” said Koffman.

“But, ironically, I internalized one of the core ideas of anthropology … which is that you’re shaped by your culture and history in ways you can’t really see, and it’s a fool’s errand to try to deny the way culture’s second skin helps you breathe and be in the world.”

After his undergrad, he realized it was time for a “confrontation with my Jewishness,” he added.

“I was born and will be identified by others as a Jew and I will probably be identified as a Jew when I die no matter what I do in the middle. It’s up to me to learn to engage with my Jewishness in a serious intellectual way,” Koffman said.

He ended up researching encounters between Jewish and Indigenous peoples in the U.S. and Canada, which he published as a book entitled The Jews’ Indian: Colonialism, Pluralism and Belonging.

Koffman acknowledged the limits of this approach. “In a sense, Jews are always the subject of my study and, somewhat awkwardly, Indigenous people are the objects of the study,” he said. “What did the Jews in my study think about, do with and interact with Indigenous people?”

“Colonialism has a hard time advocating or recognizing Indigenous sovereignty as something that is OK, natural and important to do the intellectual and community-based engagement,” he said.

“In terms of relations between Indigenous Studies and communities that we’re from and that we study, and Jewish Studies, it’s about nation-to-nation relations. How do we engage in epistemological and diplomatic study where our communities come together … and come to recognize each other without coercion while really affirming self-determination in that work.”