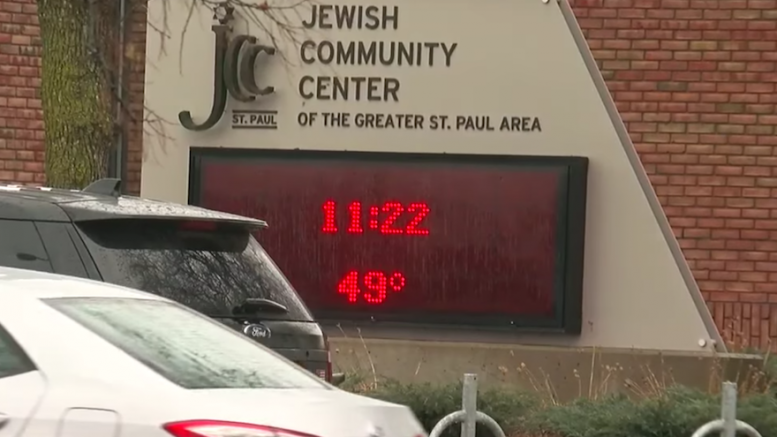 The Jewish community center in St. Paul was among the JCCs evacuated over the weekend. (Screenshot from YouTube)

WASHINGTON (JTA) — The White House responded to a reporter’s query about the latest string of bomb threats called in to Jewish community centers by saying “these actions are unacceptable.”

“Hatred and hate-motivated violence of any kind have no place in a country founded on the promise of individual freedom,” according to a statement attributed to White House deputy press secretary Lindsay Walters that was shared Monday Feb. 20 by NBC News correspondent Peter Alexander. “The President has made it abundantly clear that these actions are unacceptable.”

The statement did not specify that the threats targeted Jewish institutions, although it came in reply to a query about threats to JCCs.

Alexander posted Walter’s response on Twitter, adding, “@PressSec responds to my request for comment about wave of threats to Jewish community centers.”

Separately, Trump’s daughter, Ivanka, who is Jewish, condemned the threats in a tweet that alluded to the fact that the targets were Jewish.

“America is a nation built on the principle of religious tolerance,” she said. “We must protect our houses of worship & religious centers.” She ended the tweet with the hashtag “#JCC”.

President Donald Trump denounced anti-Semitism a day after bomb threats to at least 10 Jewish community centers across the country and a large-scale cemetery vandalism in the St. Louis area.

Under pressure to condemn anti-Semitism in the wake of what has been called an uptick in incidents since he was elected, Trump told MSNBC on Feb. 21, “Anti-Semitism is horrible and it’s going to stop, and it has to stop.”

The president made the remarks at the National Museum of African-American History and Culture in Washington, D.C., after taking a tour. His daughter Ivanka was with him on the tour; a day earlier she had called for the protection of religious institutions and used the hashtag #JCC, and called on her father to do the same.

Asked by reporter Craig Melvin if his statement meant he was denouncing anti-Semitism “once and for all,” Trump replied: “Of course, and I do it whenever I get the chance to do it.”

Last week, Trump was asked during a news conference about the prior JCC bomb threats and what the government’s response would be to “an uptick in anti-Semitism.” Although the reporter did not suggest Trump was anti-Semitic, the president answered by denying he is an anti-Semite and called the question “insulting.” He ordered the reporter to sit down, and did not answer the question.

The reporter, Jake Turx, later said that he was not offended by the president’s response and that clearly he had misunderstood the question. During a Fox News interview, Turx said he believed Trump’s emotional reaction to the subject is a hopeful sign because “it shows a president who is so committed against this problem of anti-Semitism that it bothers him on a personal level, a deep personal level.”

Jewish groups and political leaders also called on Trump to speak out against anti-Semitism, especially after four waves of bomb threats called in to dozens of JCCs across the country in the past five weeks.

On Tuesday morning, Trump’s opponent in the 2016 election, Hillary Clinton, in a tweet called on Trump to condemn anti-Semitism.

“JCC threats, cemetery desecration & online attacks are so troubling & they need to be stopped. Everyone must speak out, starting w/ @POTUS,” she wrote.

Meanwhile, The Simon Wiesenthal Center has called on U.S. Attorney General Jeff Sessions to set up a task force to catch the callers who have made false bomb threats to Jewish community centers across the country.

In its statement issued Feb. 21, the Jewish human rights NGO said it also called on President Donald Trump to outline his administration’s plan to combat what the center called “surging anti-Semitism.”

The statement said the center appreciated “the efforts made by law enforcement to protect people of all faiths,” but added that “given the current circumstances,” it was urging Session to create the task force “with the assignment of identifying and capturing the culprit or culprits who seek to terrorize American Jewry through their threats.”

“The multi-pronged threats of anti-Semitism today demand concerted action,” Rabbis Marvin Hier and Abraham Cooper, dean and associate dean, respectively, of the center, said in the statement. “We look to President Trump to take a leadership role in addressing the problem of anti-Semitism and hate in America head-on in a speech at a time and place of his choosing.

“We need lead leadership from the top to effectively combat the hate.”

The JCC Association of North America said that since Jan. 9, there have been 69 bomb threat incidents at 54 JCCs in 27 states and one Canadian province. All were hoaxes but forced the evacuation of many of the buildings.