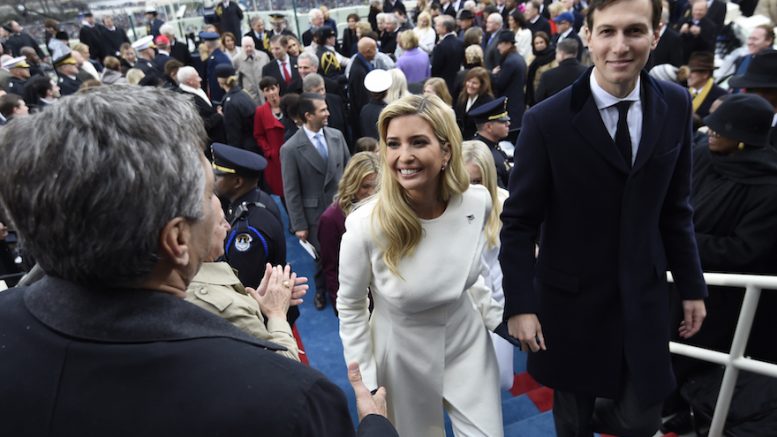 (JTA) — President-elect Donald Trump and his wife, Melania, attended the Inauguration Day service Friday, Jan. 20, 2017  at St. John’s Episcopal Church, a tradition that goes back to 1933. The live video showed the Trumps shaking hands with the pastor and entering the church, followed immediately by his daughter Ivanka and her husband, Jared Kushner.

On Twitter, some of the Jews I follow noted that Jared and Ivanka are Orthodox Jews, and that it is the Orthodox rabbinic consensus that Jews don’t belong in a church. One journalist examined the pool photo of the service with the attention of a forensic scientist, spotting the couple but noting that neither Kushner nor his wife appeared to be holding the prayer sheets from which the other guests appear to be praying.

I could climb on my high horse here and say that I am not one to stoop to this kind of religious gatekeeping. But let’s face it: I work at a Jewish news agency, and readers can’t get enough of Jared and Ivanka, and the idea that a day school-educated Orthodox Jew and a Jew by choice have emerged as two of the most powerful people on planet Earth. And of course I am curious about their religious choices — I wouldn’t be in this business if I didn’t find the ways people live their Jewish lives endlessly fascinating.

But too often this fascination can turn ugly, and pointing out how an observant public figure is or isn’t living up to the standards set by others can become awfully judgy. Observant Jews pass judgment, describing people’s behavior as a “kiddush Hashem” — an act honoring God’s name — or a “chilul Hashem,” a desecration of God and Jewish law, or halacha. Less observant Jews are often watching for signs of hypocrisy.

The halacha police were out in full force when Joe Lieberman was named Al Gore’s running mate in 2000. People wanted to know if he took part in Senate votes on Saturdays, would travel to important functions on Shabbat or scarfed down non-kosher food on the campaign trail. The upside of this kind of scrutiny is that Jewish and non-Jewish readers learned a little bit about Jewish law, and gained an appreciation for Shabbat and the relief it could provide from the 24/7 pressures of the working world.

Lieberman himself would go on to write a book, “The Gift of Rest: Rediscovering the Beauty of the Sabbath,” in which the former Connecticut senator wrote that the purpose of Shabbat isn’t “to recharge our batteries so we can work harder but to recharge our souls so we can live better.” And Lieberman explained the necessary compromises he would make while doing his best not to violate the spirit of the day of rest.

A story went around earlier this week, quoting a Republican activist in Israel, that Ivanka had gotten a special “dispensation” from a rabbi so she and Kushner could drive in a car on Shabbat and safely attend the various inauguration festivities. But talk to anybody who is observant and in public service, and you’ll find a range of ways in which they deal with the “Shabbat dilemma,” with and without their rabbi’s approval. The tradition is, after all, more lenient and creative, especially when it comes to public service or saving a life, than gossips like to acknowledge. And even in Orthodox synagogues, members don’t walk in lockstep, and they make a range of personal choices about the ways they observe.

Ivanka Trump, like Joe Lieberman, has also spoken about the pleasures of Shabbat, 25 hours that are set aside each week for family, friends, worship and blessed freedom from having to deal with the pressures of the rest of the week.

“It’s an amazing thing when you’re so connected to really sign off,” she told Vogue in 2015. “And for [their oldest daughter] Arabella to know that she has me, undivided, one day a week? We don’t do anything except play with each other, hang out with one another, go on walks together. Pure family.”

We all should spend less time worrying about how Jared Kushner and Ivanka Trump, or any of us, observe Jewish rituals and more time asking how we or they affirm Jewish values. Jared and Ivanka, as close advisers to her father, have an opportunity to make the world a better place, to ensure equal protection for people under law, to build a sense of common cause among a divided country, to raise up the fallen and encourage policies that lead all of us in paths of peace. If they can be forces for that, then it will really be a kiddush Hashem.

Be the first to comment on "Jared Kushner, Ivanka Trump and the halacha police"