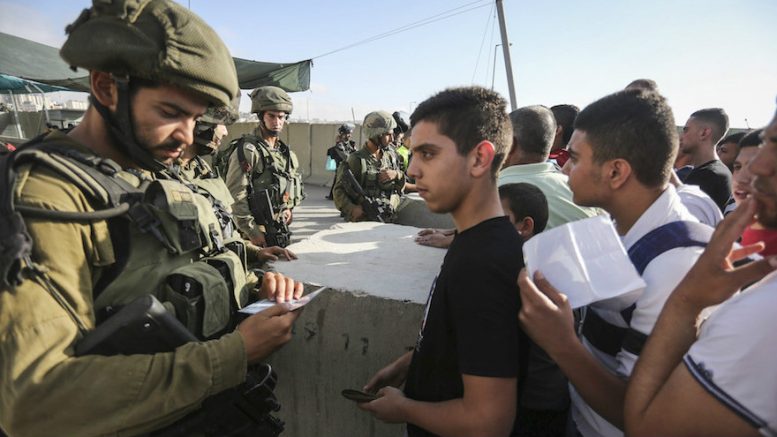 Israeli soldiers checking Palestinian ID’s at the Qalandia checkpoint between the West Bank city of Ramallah and Jerusalem, July 1, 2016. (Flash90)

JERUSALEM (JTA) — “Lone wolf” terrorism in Europe is making headlines around the world. But in Israel, the phenomenon of angry or troubled individuals taking up arms is old news.

Since October, Israelis have endured a wave of violence that has been carried out largely by individual Palestinians without backing from terrorist groups — so much so that some have called this the “lone wolf intifada.”

As of the end of June, 38 people had been killed and 298 injured by attackers, according to the Shin Bet security service.

A large majority of the attacks — some 1,500 out of 2,000 — were in the West Bank, where the Israel Defense Forces is responsible for protecting Israelis. Here are five key methods the army used to turn the tide of violence.

Keep the terrorist groups out of it

The wave of violence may be considered a lone wolf intifada, but that’s because the army has put a lid on the terrorist groups, a senior IDF officer told reporters during a briefing this week. He spoke on condition of anonymity because of the nature of his job.

Since the second intifada, the last major Palestinian uprising in the early 2000s, the Israeli army has managed to largely dismantle the networks run by Hamas and other terrorist groups in the West Bank, according to Shlomo Brom, a retired brigadier general and an analyst at Israel’s Institute for National Security Studies think tank.

“Basically the terror networks are dismantled, and basically the security forces are dealing with maintenance,” he said.

But that doesn’t mean terrorist groups have stopped trying to launch attacks against Israelis. In the past three months, the army has thwarted dozens of attempted attacks by Hamas alone in what the senior official called the “old war” against organized terror.

“We’re still having day-to-day indications of them trying to find people in the West Bank, fund them, give them weapons, give them explosives and tell them to shoot Jews,” he said. “This hasn’t changed.”

A new war is being waged against the lone wolves. Their attacks started last fall in Jerusalem, sparked by Palestinian fears of Jewish encroachment on the Temple Mount. But the center of the lone wolf intifada quickly shifted to the West Bank city of Hebron, with attacks on soldiers and settlers in the area, as well as across Israel.

Around that time, at the end of last year, the army began building a system to deal with the new threat that was emerging, the senior officer said. The goal was to predict the unpredictable: when, for example, a particular Palestinian youth might grab a knife from his mom’s kitchen and take to the streets to spill Israeli blood. Motives can range from nationalism to family problems, he said.

“Unlike terrorists who belong to Hamas or the Islamic Jihad, if you get to their house the week before the attack, the kid doesn’t know that he’s a terrorist yet,” the senior officer said. “So that’s the main challenge.”

Based on what was known about previous attackers, the army created an alert system that is constantly being tweaked. These days, army analysts feed huge amounts of intelligence information into that system — a combination of “social media, human intelligence, signal intelligence,” according to the senior officer, who declined to provide further details about intelligence gathering. In return, he said, the system produces a small number of alerts about potential future attacks.

“One of the ways you produce an alert is, what are the last actions that a specific individual did,” the senior officer said. “For example, if he’s exposed to incitement and right afterwards he rents a car, maybe an unregistered car, this raises questions.”

In response to an alert, options include arresting a suspect, monitoring his or her actions, intervening through the family or deploying troops to a potential target area. When attackers are arrested or killed without managing to cause carnage, future attackers are thought to be deterred.

“The attacks are decreasing because of their ineffectiveness, because most of them fail,” said Brom, the Institute for National Security Studies analyst. “There is a limit to the number of even frustrated young people who are willing to give their life and to achieve nothing. So it makes sense that over time, the numbers of attacks are fewer and fewer.”

Go after the inciters

Incitement to violence can occur in person, through traditional media or over social media. Hamas is responsible for a large portion of the incitement of Palestinians against Israel, the senior officer said.

Get guns off the streets

Despite Israel’s control of the West Bank’s borders, weapons manufacturing in the territory has “increased drastically” in the past couple years, according to the senior officer. He estimated there are hundreds of production centers there.

In recent months, he said, the army has launched an organized crackdown, including closing some 20 locations producing homemade Carl Gustav submachine guns, or “Carlos,” like those used last month by two Hebron-area cousins in a deadly shooting at the upscale Sarona market in Tel Aviv.

“They paid for their suits more than they paid for the weapons,” the officer said of the Sarona shooters, who wore dress suits during the attack. “And our logic is very simple … If not everyone can get a weapon with 2,000 shekels [about $500], the price will go up and they’ll have to make all sorts of arrangements and meet more and more people in order to get the weapon they want, we will see fewer attacks with weapons because people will make more mistakes.”

At the same time, the army tries to minimize its footprint on Palestinian society. That starts with trying to arrest rather than kill attackers and would-be attackers, the senior officer said.

According to Brom, the army also pushes to limit collective punishment, like the withholding of taxes that Israel collects on behalf of the Palestinian Authority, which governs parts of the West Bank, or revoking permits to work in or visit Israel.

“The more you can separate between the public from the perpetrators, the better,” he said.

When the army does implement measures with punitive effects, like refusing to return the bodies of Palestinians killed during attacks or destroying attackers’ homes, it aims only to target the attackers’ supporters, according to Brom.

Col. Ido Mizrachi, the head of engineering in the Central Command, which is responsible for the West Bank, acknowledged in another briefing with reporters that demolishing Palestinian homes causes resentment, but said he thinks the deterrent effect is stronger. To maintain that balance, he said, his engineers work quickly and use techniques to ensure that surrounding homes, or even adjoining apartments, are not damaged.

While the senior officer downplayed the Palestinian Authority’s security cooperation with Israel, Brom said the partnership is one of the main factors that enables the army to limit wider tensions.

“If the Palestinian Authority stopped cooperating, the Israeli security services would be in a situation in which they would have to do themselves what the Palestinian Authority is doing,” he said. “The problem is, that would create much more friction with population at large. And more friction with population at large means more motivation for more youngsters to join terrorist groups.”

Overall, the army believes this combination of tactics has helped to change the mentality of Palestinians in the West Bank, reducing the number of people willing to risk their lives to attack Israelis.