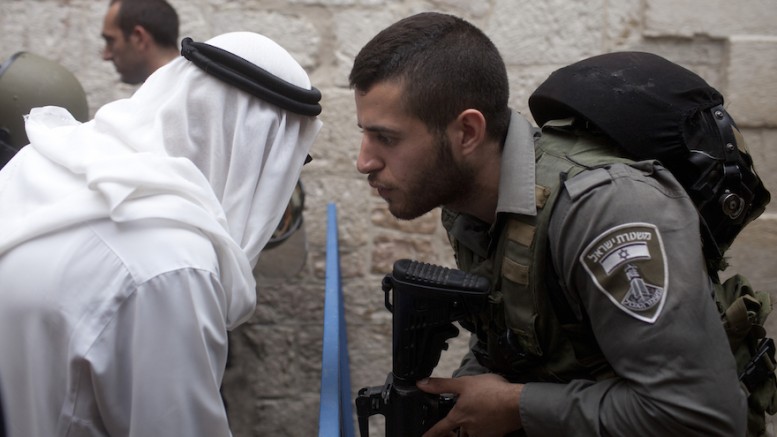 An Israeli border policeman speaking to a Palestinian man near the scene of a stabbing attack in Jerusalem’s Old City, Oct. 7, 2015. (Lior Mizrahi/Getty Images)

JERUSALEM (JTA) — The leader of the opposition in Israel said that it will not join the government to show unity during the current security crisis.

“We are all united in the fight against terrorism, but that is not a reason to join a failing government,” Zionist Union head Isaac Herzog said on October 12 at the opening of the Knesset’s winter session.

Herzog called for a regional peace summit to restore calm, leading to catcalls from lawmakers of several parties, including his own.

Prime Minister Benjamin Netanyahu said in his address: “Terror is not a consequence of frustration at the lack of progress in the diplomatic process. It is clear that it comes from the desire to destroy us. That was the motive for terrorism in the early years of Zionism, and that’s what it is today.”

Netanyahu stressed that Israel is committed to maintaining the status quo on the Temple Mount and railed against the Palestinians’ use of “mendacious propaganda about the Temple Mount to make trouble.” He accused Palestinian Authority President Mahmoud Abbas of encouraging the current upsurge in terror attacks by disseminating such lies.

Lawmakers from the Arab Joint List, who have demonstrated in support of Palestinian attackers, walked out of the room when Netanyahu began speaking.

Israeli President Reuven Rivlin called the Knesset gathering a “celebratory occasion,” but added in the wake of the many terror attacks in recent days, “our hearts cannot celebrate.” He sent his wishes for recovery to those injured in attacks and expressed his support for the security services, saying “their fight is all of our fight.”

“Unfortunately, we live in a reality of bloody conflict,” Rivlin said. “There is no definite timeline to the end to this conflict, to this tragedy. What is clear is that the responsibility for our lives here, our lives here together, Jews and Arabs, rests on all our shoulders. What is clear is that the infrastructure to any solution is establishing trust between the parties.”

The Knesset voted against one of four no-confidence motions and was expected to reject the others.

Be the first to comment on "Israel’s opposition leader: Unity against terrorism no reason to join gov’t"