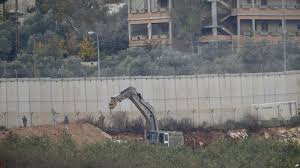 JERUSALEM (JTA) — The Israeli military exposed and prepared for destruction a second tunnel that starts in Lebanon and stretches into Israel.

The discovery of the second tunnel was announced by the IDF on Saturday night. It reportedly was recently excavated.

“The route of the tunnel is controlled by the IDF and does not constitute a threat to the residents of Israel,” IDF Spokesperson Brig.-Gen. Ronen Manelis said. “Our forces continued to operate in the area during the weekend under stormy weather and continue to act according to the plan that was approved for further detection and exposing the terrorist tunnels.”

A third tunnel reportedly has been identified but not yet exposed and prepared for destruction.

Also on Saturday, the IDF identified what it called three apparent Hezbollah operatives approaching the area where work was underway to identify a tunnel in an attempt to steal technology. Israeli soldiers shot at the three men who fled back over the border between Israel and Lebanon.

“IDF soldiers are working methodically and decisively around the clock, even in inclement weather, to expose and neutralize tunnel after tunnel,” Israeli Prime Minister Benjamin Netanyahu said on Sunday. “We need patience, but with the same perseverance we will continue the operation until its conclusion – until the tunnel threat in the north is neutralized.”

Meanwhile, UNIFIL – the United Nations Interim Force In Lebanon –  on Thursday confirmed the existence of the first exposed tunnel between Lebanon and Israel and said in a statement that it “now engaged with the parties to pursue urgent follow-up action. It is very important to determine the full picture of this serious occurrence.”