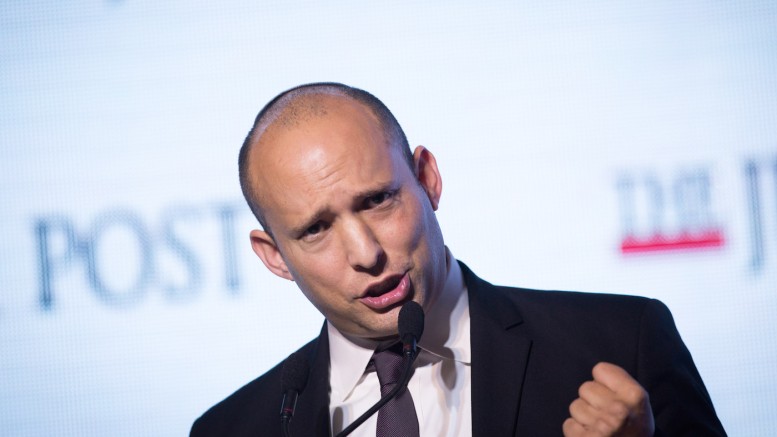 Earlier this week, one of his party’s Knesset members, Yinon Magal, resigned amid allegations that he sexually assaulted several women who worked for him. Last week, Israeli Prime Minister Benjamin Netanyahu reportedly rebuked Bennett for apparently telling a group of settler leaders that he shot a proverbial “bullet between Bibi’s eyes” to thwart any discussion of unilateral Israeli withdrawals from the West Bank – a particularly poor choice of words given the assassination of Prime Minister Yitzhak Rabin 20 years ago last month.

So when Bennett came to New York this week for a whirlwind trip filled with TV interviews, meetings with American Jews and visits to Jewish schools (Bennett is both Israel’s minister of education and of Diaspora affairs), it must have seemed like a breath of fresh air.

I caught up with Bennett on Wednesday and we talked about why he believes Israel should annex the Etzion settlement bloc in the West Bank, why Reform and Conservative Jews should stick with Israel, and why he has shifted course away from the haredi Orthodox reforms he championed when he was first elected to the Knesset in 2013.

A condensed version of our conversation follows.

Uriel Heilman: What does your endgame on the Palestinian-Israeli conflict look like?

Naftali Bennett: My vision is for the Palestinians to have autonomy on steroids while we apply Israeli law on the Israeli-controlled parts of Judea and Samaria [the West Bank]. What does that mean? The Palestinians vote for themselves. Barring security, they govern and control almost all aspects in their areas: education, economy, infrastructure. They have full freedom of movement within the entirety of Judea and Samaria. At the same time, we lead an international effort of massive infrastructure investment. What I’m suggesting is less than a Palestinian state primarily in the sense that sovereignty indicates security control and freedom to bring in any weaponry, and that’s something we simply can’t accept.

So why don’t you use the terminology that’s been used in the past: a demilitarized Palestinian state?

That is a creature that does not exist according to international law. You cannot force a state to be demilitarized. Even if a state enters a treaty where it commits to be demilitarized, there’s no way to reverse statehood if it violates it. The term demilitarized Palestinian state is an oxymoron.

Is your vision sustainable for the long term?

What’s the alternative? My approach is an imperfect plan. I’m not suggesting we’re going to be singing “Kumbaya.” The approach that I’m promoting is reasonable, sane. In the Middle East, we don’t have the luxury to indulge in fantasy. If it were up to me, I would not wait. I would start with Gush Etzion [the West Bank settlement bloc near Jerusalem], and apply Israeli law and sovereignty on Gush Etzion first.

So your viewpoint is we have to worry about what’s good for Israel, not for the rest of the world or the Palestinians.

My plan is also the best plan by far for the Palestinians. If we were to accept the Palestinian requirements for a state, ultimately it would become a Hamas state. If Israel would stop operating in Areas A and B [Palestinian-populated areas of the West Bank], within days Abu Mazen [Palestinian Authority President Mahmoud Abbas] would be taken over by Hamas. Abu Mazen and Fatah are surviving on the bayonets of the IDF.

You expressed your dismay and best wishes to Yinon Magal’s family when he resigned, but you didn’t say anything to the women he allegedly harassed. Is there anything you want to say to his alleged victims?

I said everything I need to say publicly about a week ago. Why don’t we talk about education?

What do you want to tell me about education?

We’re making history. For the first time, Arabs are learning Hebrew starting in kindergarten; until now they started in third grade. Lack of language is one of the Arabs’ biggest impediments to getting a job. Since Israel’s inception, class sizes were 40 kids. We put forward a big reform where all first-graders now are in classes averaging 28 kids. Within five years that will be the average class size in all elementary schools. We’re doing massive investment in STEM education. For Israel to retain its amazing position as the largest concentration of high tech after Silicon Valley, we need more engineers and mathematicians. We have too many lawyers.

What about improving the haredi Orthodox educational system?

More haredim are seeking to go to university, more haredim want to get a job. The haredi community realizes it’s in their interest to start working. We’re doing it, but my approach is without coercing – not by force, but by making better education available. I believe this is the way forward.

Isn’t coercion the only way to get haredi schools to teach subjects like math and English? In the last government, you were a forceful proponent of haredi and religious reforms, including drafting haredim into the army. Yet the current government hasrolled back almost all those reforms.

I’m the biggest proponent of haredim working and serving. The only question is how. We have to be smart here, not only right. Being smart is nudging the haredim into work and service, and not forcing them.

In the last government, when you were minister of religious affairs, you talked about easing conversion strictures and possibly non-Orthodox marriage. Has there been any movement on those issues?

How do you make the case for supporting Israel and building the Diaspora-Israel relationship when American Reform and Conservative Jews see their own rabbis and converts discredited in Israel?

It’s a problem. But we’re an amazing state that every Jew in the world can be proud of, with all its imperfections. Let’s talk. There’s a great deal we can learn from the Diaspora, especially vis-a-vis openness, tolerance to all stripes.

Do you share the view of some Israeli leaders that there’s no future for Diaspora Jewry?

No. Since the first exile in Babylon, there’s always been a powerful Diaspora. Certainly, I would love people to make aliyah, but I’m well aware that many won’t. And if in the past we in Israel viewed American Jews either as a wallet or as a source of aliyah, I’m changing all of that. We don’t need donations. Israel is a strong, powerful, independent state with a very powerful economy. Now the role has reversed. Israel has to invest some of its budget — hundreds of millions of Israeli dollars — in partnership with Jews here in the States, to strengthen the connection between American Jews and Israel and to keep Jews connected to their Judaism. Of all the problems the State of Israel is facing, including Iran, security issues, haredim – certainly in the top 3 list that causes me to lose sleep is the future of Jews in America. We have to act. Two hundred years from now, each and every one of us is going to be asked: Back in 2015, when you saw the Pew report [on U.S Jewry], what did you do to keep Jews Jewish?

Be the first to comment on "Israel’s Education Minister Naftali Bennett: Time to annex parts of West Bank"