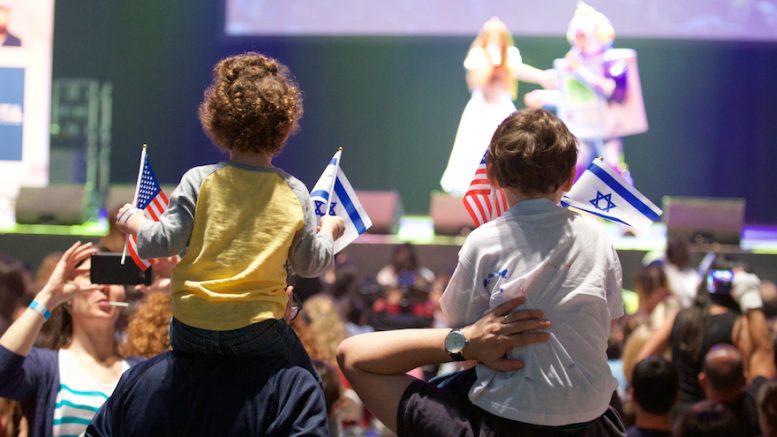 NEW YORK (JTA) — Six years ago, the Israeli government released a series of controversial ads to show its expatriates that they would never feel at home in the United States.

The ad campaign, which was pulled following a backlash from Israelis and Jews abroad, represented Israel’s traditional attitude toward citizens who left its borders. Emphasizing its image as the Jewish national homeland — and ever concerned about its Jewish-Arab demographic balance — Israel’s government has long encouraged Jews not only to move to Israel but to stay there. In 2014, then-Finance Minister Yair Lapid calledIsraelis who moved to Berlin “anti-Zionists.”

Here are four things to know about the Israelis who live in the United States.

No one knows how many Israelis live in the United States — but it could be a million.

There’s no real way to know how many Israelis are living in the United States. Any first-generation child of Israelis is considered an Israeli citizen, and Israel can’t force its expatriates to register with their local consulate.

Estimates of Israelis in America vary widely — from about 200,000 to as many as a million. According to statistics from the U.S. Department of Homeland Security, some 250,000 Israelis acquired permanent residence in the United States between 1949 (when 98 Israelis left the infant state) to 2015 (which saw about 4,000 Israelis move stateside). But that number does not chart deaths or Israelis who moved back.

The 2013 Pew Research Forum study on American Jews found a similar number: About 300,000 Jews in America were either born in Israel or born to an Israeli parent. In total, Pew found that first- or second-generation Israelis account for about 5 percent of American Jews.

Even the Israeli government produces two different numbers. Israel’s Central Bureau of Statistics reports that a little more than 500,000 Israelis in total moved abroad from 1990 to 2014 — and nearly 230,000 came back. But Israel’s U.S. Embassy told JTA that between 750,000 and 1 million Israelis live in the country. Adam Milstein, chairman of the Israeli-American Council, an umbrella group for Israelis here, told JTA that includes 400,000 children born to an Israeli parent.

They are centered in New York and Los Angeles.

Israelis tend to go where the Jews are. Milstein estimates that about 250,000 Israelis each live in the Los Angeles and New York City metro areas, which also boast the two largest Jewish communities in the United States. Smaller concentrations of Israelis (and Jews) live in South Florida, Chicago and San Francisco.

And Israeli musicians — from Idan Raichel to Shlomo Artzi to Sarit Hadad — are never hard to find on New York’s concert scene. An adaptation of Israeli novelist David Grossman’s book “To the End of the Land” opened recently at the the annual Lincoln Center Festival.

They come for education and work.

Neither the Israeli Embassy nor the Israeli-American Council tracks why Israelis move to the U.S., but Milstein suspects it’s for professional and academic reasons. Israel’s small size means Israelis with college or advanced degrees often seek to advance their careers in places with more opportunities abroad.

Israelis “don’t have the roots [of] someone whose family lived in Italy for 20 generations, or who lived in America for the last 150 years,” Milstein said. “The Jewish people, the most valuable asset they have is their brain. They can take their brain[s] anywhere.”

Israel, conversely, has begun to worry about its “brain drain” recently. A 2013 study by the Taub Center for Social Policy Studies found that for every 100 Israeli scholars who stayed in Israel, 29 left for positions abroad in 2008.

The drain is happening in the tech industry, too: According to the Israeli Executives and Founders Forum, an Israeli tech association, there are nearly 150 Israeli startups in Silicon Valley.

Israel still wants them back.

Israel’s government may have recognized that it can’t bring back all the Israelis from the United States, but it’s still trying. The appeal is both emotional and economic.

The 2011 ad campaign, for example, featured a series of shorts highlighting the Israeli-American cultural divide. In one, a child of Israelis in America, video chatting with Israeli grandparents, talks about the upcoming winter holiday of Christmas, not Hanukkah. In another, an Israeli woman comes home to commemorate Memorial Day in Israel with a candle — her American boyfriend mistakes it for romantic lighting.

More recently, Israel has also laid out financial incentives to draw expatriates back, including a program set to launch later this year called “Returning at 70,” a reference to Israel’s 70th Independence Day in 2018. The Immigrant Absorption Ministry will provide returning Israelis with financial assistance for six months, and will even cover a portion of their salaries in order to ensure they can find work in their old-new home. The government is also offering free professional development courses and consulting.

Israelis who have opened businesses stateside, meanwhile, will receive about $14,000 for the costs of relocating the business. And Israelis who move to the country’s underdeveloped northern and southern regions are eligible for grants as well as loans with low interest rates.

But Milstein says that even with these programs, Israeli officials still understand that it’s better to embrace expatriates than shame them into coming home.

“By trying to raise our guilt feeling, it backfired,” he said. “The State of Israel is getting to the realization that [our] being here, they can’t do too much about it. We can help the State of Israel a lot. They understand we can be their strategic asset.”