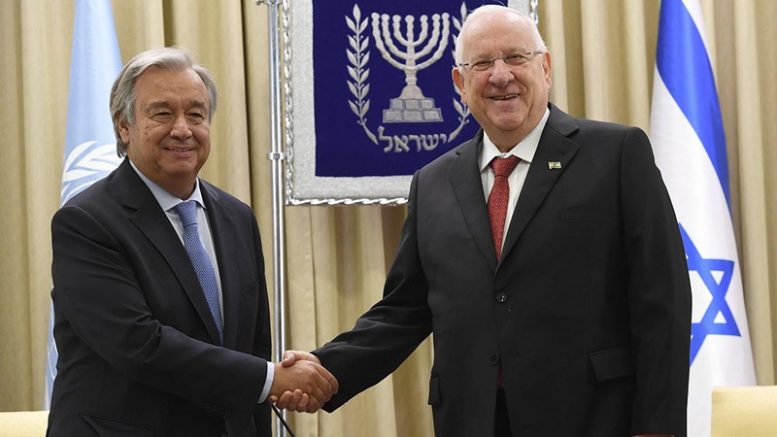 (Israel) – President Reuven Rivlin held a working meeting at his residence, this morning (Monday, 28 August 2017), with United Nations Secretary General, António Guterres, who is on his first visit to Israel since his appointment. Before their meeting both men gave media statements.

President Rivlin began by welcoming the Secretary General to Israel and wished him success in his new role on behalf of the Israeli people. The President noted, “We do appreciate all that the UN is doing to fight world hunger, to improve access to clean water, and to raising awareness about climate and environmental challenges.” He stressed, “However, as we stand in Jerusalem, the ancient and eternal capital of the Jewish nation, I would like to remind us one important lesson. The United Nations was established with an understanding of the importance of nation states. The UN makes it possible for nation states to work together as equals, for the sake of all humanity. No one understands this better than us, Israelis.”

The President urged the Secretary General to work to end the discrimination against Israel in sections of the UN, and said, “The State of Israel is the one place in which the Jewish nation can fulfill its right for self-determination. Unfortunately, all around our region we are witnessing these days, how dangerous is the collapse of the nation-state. We are witnessing with our own eyes, terrible humanitarian disasters where the state is too weak and cannot help its people. And because the idea of the nation-state is so deeply rooted in the values and principles of the UN, I call upon you, Mr. Secretary General, to work to end the discrimination against Israel in some branches of your organization. This targeting of Israel, this singling out of the world’s only Jewish State – and even actions and statements that threaten to destroy Israel – are unacceptable and should come at a price.” The President added, “No member state in the UN should be allowed to behave like that. These actions weaken cooperation between states and are against the rule of law.”

He added, “Mr. Secretary General, we appreciate your brave leadership regarding the discrimination against Israel. We hope that working together, we can create a more productive partnership, between Israel and the UN, for the sake of our region, and for the sake of all humanity.”

The President continued, “Secretary General, Israel remains committed to peace with its neighbors. Hamas in Gaza must not be allowed to rebuild their weapons, and the world must call on Hamas, to return our sons. Return them home. To their families. I urge you to take this mission and to help us bring back our sons.”

Secretary General Guterres thanked the President and noted, “I started this visit to your beautiful country with two very emotional moments. First in Yad Vashem, and then in the Grove of (Righteous Among the) Nations. And Yad Vashem is to remind us of the Holocaust, and to remind us of how important it is even today as the Holocaust was not more than the culmination of millennia of the expression of anti-Semitism around the world, through discrimination, through persecution. Yad Vashem is there to remind us that we need to be in the first line in fighting against anti-Semitism, but first of all fighting against all other forms of bigotry be it racism, xenophobia, even anti-Muslim hatred, to promote understanding and to promote dialogue, and I am very appreciative Mr. President for what has been your commitment to dialogue and understanding.”

He continued, “I want to express to you Mr. President that you can be fully confident that in my role as Secretary General, and in relation to the functions of the secretariat that I am supposed to meet, I am very keen in stressing the values of the Charter, and the very important value of the Charter, impartiality. And impartiality means treating all states equally, and I am totally committed to that in my action and in everything I can do for the organization I lead. I do believe that in particular when you mention those that call for the destruction of the State of Israel that that is a form of modern anti-Semitism, but you also understand that I sometimes disagree with positions with the Government of Israel or any other government, and that is absolutely normal in a society where many of your citizens have exactly the same expressions of opinions. We will always be very frank in the dialogue with the State of Israel in trying to find ways for peace to be possible in this region, but we will always be very committed to make sure anti-Semitism doesn’t prevail and that equality in the treatment of all states is fully respected.”

During their meeting, the President stressed to the Secretary General that it was inconceivable that Iran could have the rights of a member of the United Nations and continue inciting against the State of Israel. The President made it clear that these statements contradicted the values of the UN, and allowed for the spread of anti-Semitism from this important stage.

The two discussed the current situation in Gaza, the role of UNDOF along the northern border of Israel, and the importance of restoring confidence as a central component of Israeli-Palestinian discourse.

Be the first to comment on "Israeli President Reuvin Rivlin meets with UN Sec. Gen. Guterres"