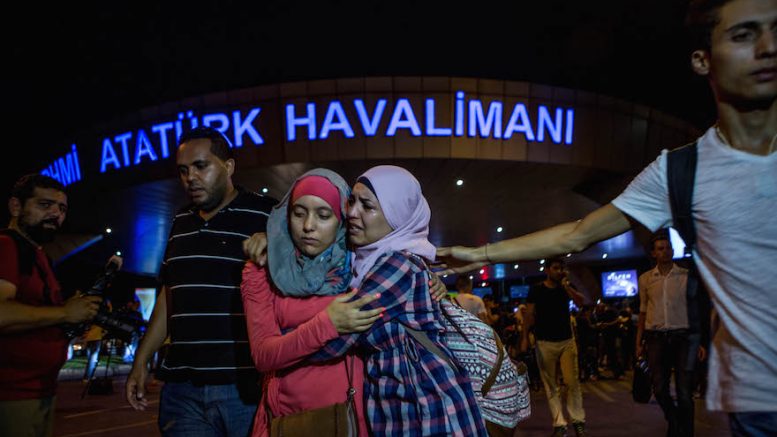 JERUSALEM (JTA) — Israeli President Reuven Rivlin sent a letter of condolence to his Turkish counterpart in the aftermath of the terror attack at an Istanbul airport that has killed at least 41 and injured more than 230.

Three suicide bombers opened fire on passengers in the international terminal at the Ataturk Airport on June 28, 2016 before detonating themselves.

The attack came hours after Israel and Turkey signed a reconciliation deal ending a six-year break in diplomatic relations.

“This cowardly, murderous act is an example of the most vitriolic hatred the like of which we are sadly seeing across our region and the entire world today,” Rivlin wrote to Recep Tayyip Erdoğan in the letter sent Wednesday, in which he also offered Israeli assistance in recovering from the attack. “I take this opportunity to welcome the chance to renew our good relationship especially because our strengthened dialogue will greatly aid in our joint efforts against this threat, and because it sends a strong message to the terrorists that we will stand united against hatred.”

Turkey had cut off diplomatic relations with Israel in 2010 after Israeli commandos killed nine Turkish citizens on a boat that was attempting to break through Israel’s blockade of Gaza.

As Time reported, Turkish commentator Mustafa Akyol tweeted that the timing of the Istanbul bombing, just after the reconciliation deal was signed in Jerusalem and Ankara, may not have been a coincidence — suggesting the attack could have involved anti-Israel undertones.

“All civilized nations must stand together to fight the scourge of terrorism,” the statement said.

At least one Palestinian was confirmed killed and seven Palestinians injured in the attack. Among the other foreign nationals killed were people from Saudi Arabia, Iraq, Tunisia, Uzbekistan, China, Iran, Ukraine and Jordan, according to reports.

Israel’s embassy in Ankara condemned the attack and extended its condolences on Wednesday.

Though no group has claimed responsibility for the attack, Turkish officials have said it appears to have been mounted by the Islamic State.

The airport, the third busiest in Europe, was up and running by Wednesday morning.

A Turkish Airlines flight scheduled to depart from Tel Aviv’s Ben Gurion Airport for Ataturk Airport on Wednesday June 29 was canceled, according to the airlines website. Nine flights scheduled between Ben Gurion and Ataturk forThursday show departure and arrival times on the airline’s website.

Relations between Israel and Turkey broke down in the aftermath of the Mavi Marmara incident in 2010, when Israeli commandos boarded and killed nine Turkish citizens in clashes on a boat attempting to break Israel’s Gaza blockade. The votes against the agreement were in part over the payment of reparations to the families of the Mavi Marmara victims.

The Security Cabinet also said it would take up a discussion on the conditions of incarceration of Hamas prisoners in Israel as long as the issue of the bodies of two Israeli soldiers presumed dead and two Israeli citizens being held in Gaza is unresolved.

As part of the agreement, Turkey has committed to help pressure Hamas to repatriate the soldiers, Oron Shaul and Hadar Goldin, and the citizens, Avra Mangisto and Hisham Al-Said, being held there.

Under the deal, Israel will create a $20 million humanitarian fund as compensation to the families of the Mavi Marmara victims, which would not be released until Turkey passes legislation closing claims against the Israeli military for the deaths. Prime Minister Benjamin Netanyahu has apologized for the deaths, another Turkish condition for the resumption of diplomatic ties.

Turkey withdrew its demand that Israel halt its Gaza blockade, but Israel will allow Turkey to establish building projects in Gaza with the building materials entering Gaza through Israel’s Ashdod Port. The building projects reportedly include a hospital, power station and desalinization plant.