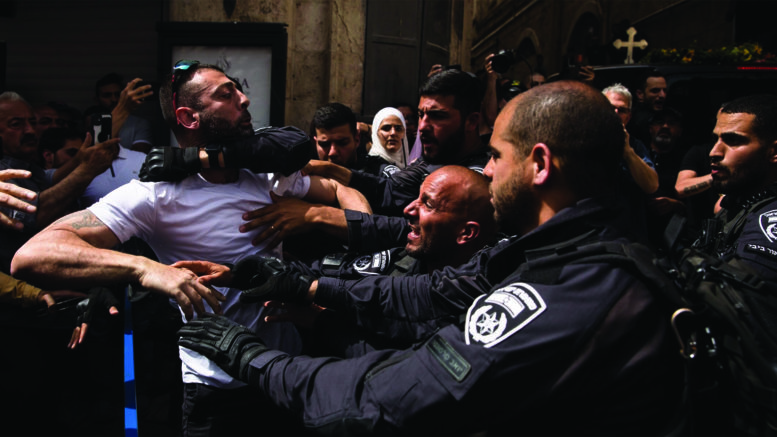 (JTA) — Israeli police armed with batons and stun grenades rushed a crowd of funeral-goers in Jerusalem, nearly toppling the coffin of Shireen Abu Akleh, the prominent Al Jazeera journalist who was killed by gunfire Wednesday during a clash in the West Bank town of Jenin.

Police said they rushed the funeral-goers on Friday because they “disrupted the public order” by throwing stones. Videos of dozens of troops in helmets rushing the funeral-goers, at one point nearly causing the pall-bearers to drop the coffin, quickly went viral. Abu Akleh, an American citizen, was born and raised in Jerusalem. A correspondent for Al Jazeera for decades, she was seen as a role model to women Palestinian journalists.

"The Israeli army is asking people if they are Christian or Muslim. If you’re Muslim you weren’t allowed in." – @ajimran

Israeli army investigators on Friday said they had narrowed down the cause of Abu Akleh’s death to two possible sources: Israeli troops in a jeep, or Palestinian gunmen firing on Israeli soldiers. They want the bullet which killed Abu Akleh to determine whether Israeli troops were responsible, but the Palestinian Authority is refusing to hand it over and is squarely blaming her death on Israel.

Israeli leaders initially blamed Abu Akleh’s killing on Palestinian gunmen, but acknowledged within a day that Israeli forces may have been responsible. Biden administration officials have called for a robust investigation. President Joe Biden is due to visit Israel next month.

Israeli troops were in Jenin in part because it appears to be the hometown of several of the terrorists who carried out a spate of deadly attacks inside Israel in recent months.

Clashes in the city, which is under the sway of terrorist groups, with barely any control exerted by the Palestinian Authority, have continued. An officer in the Israeli police’s special anti-terror unit, Noam Raz, 47, died Friday of wounds sustained in the clashes.

Be the first to comment on "Israeli police rush funeral-goers, nearly toppling the coffin of Al Jazeera journalist"