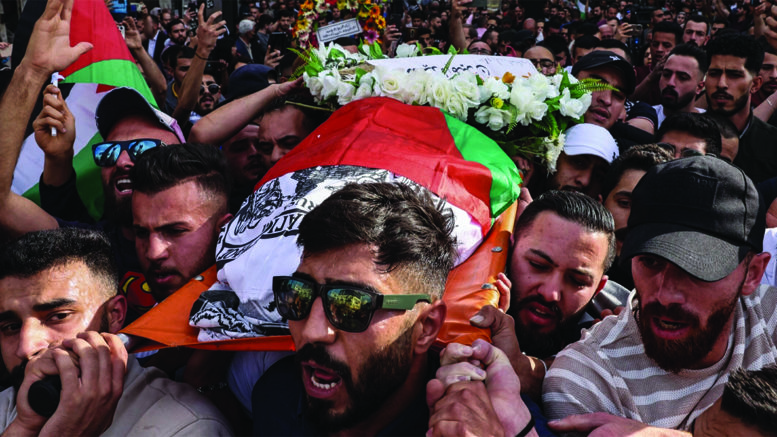 Palestinians carry the flag-draped body of veteran Al-Jazeera journalist Shireen Abu Akleh as it is carried toward the offices of the news channel in the West Bank city of Ramallah, May 11, 2022. (Ronaldo Schemidt/AFP via Getty Images

(JTA) — Hours after a gunshot killed a prominent Palestinian journalist in the West Bank city of Jenin, Israel’s defense minister said Shireen Abu Akleh could have been hit by either Israeli or Palestinian fire.

“Our initial findings from the investigation so far cannot indicate what gunfire was directed at Shireen, and I cannot exclude any option,” Benny Gantz said Wednesday evening in a conference call with media after U.S. officials had called for an investigation into the killing Abu Akleh, an American citizen.

Asked why he was open to considering that Israeli troops killed Abu Akleh, Gantz said, “We were firing from many, many areas to include the area that she was standing in between our troops and the terrorists who shot their materials so we cannot exclude that as an option.”

Gantz’s statement marked a departure from earlier accounts by Israeli authorities about what happened to the Al Jazeera journalist.

Immediately after the shooting, multiple Israeli leaders said they thought it was likely that she had been killed by a Palestinian, and the Israeli army released a video that it said backed that conclusion. But by late Wednesday, the army chief, too, said the source of the gunshot was not yet understood.

Meanwhile, a Palestinian forensic scientist who examined Abu Akleh’s body also said that more analysis was needed before a determination could be made about the gunshot’s origins.

U.S. officials had called for an investigation. International law is meant to safeguard journalists who report from conflict zones. Video footage of the incident showed Abu Akleh wearing a vest that identified her as a member of the press, according to Israeli media.

Gantz said he wanted to cooperate with the Palestinian Authority, especially regarding the forensics of the bullet that killed Abu Akleh.

“We hope to get the Palestinian cooperation on this issue because, without … pathological findings and the forensic findings, it will be very hard for us to figure out what exactly happened on the ground,” he said.

He also said Israel would be transparent in sharing its findings with the United States and with the Palestinian Authority.

“We are committed to uncovering the truth and we will communicate all our findings in a clear and transparent manner to both our American friends and to the Palestinian Authority,” he said. He expressed sorrow repeatedly for the death of Abu Akleh, referring to her by her first name, Shireen, and said Israel was committed to protecting journalists.

Tensions have heightened between Israel and the Palestinians following a series of deadly Palestinian terrorist attacks inside Israel. A number of the killers have come from Jenin.

“Very sad to learn of the death of American and Palestinian journalist Shireen Abu Akleh,” U.S. Ambassador to Israel Tom Nides tweeted. “I encourage a thorough investigation into the circumstances of her death and the injury of at least one other journalist today in Jenin.”

Abu Akleh was a longtime reporter for Al Jazeera. A number of Palestinian women journalists on social media described her as a role model.